The demand for fiber intermediates is driven by its increasing use in the manufacturing of synthetic fiber such as polyester and nylon, disinfectants, fabrics, and plastic, among others. Some of the commonly used fiber intermediates include paraxylene, acrylonitrile, ethylene glycol, purified terephthalic acid, and ethylene oxide. Fiber intermediates find application in numerous end-use industries such as textiles, plastics, petrochemicals, and cleaning products (detergents).

The consumption of fiber intermediates such as ethylene glycol is increasing in the production of polyethylene terephthalate (PET) resin and PET film on account of the increasing demand for PET bottles and beverage containers as they are effective barriers to carbon dioxide and have a high tensile strength. The expanding packaging industry, as a result of increased consumption of packaged food products and beverages owing to convenience and improved product shelf life, is likely to fuel the demand for fiber intermediates. Anti-freeze, detergents, paints, and resins are some of the other applications of fiber intermediates. 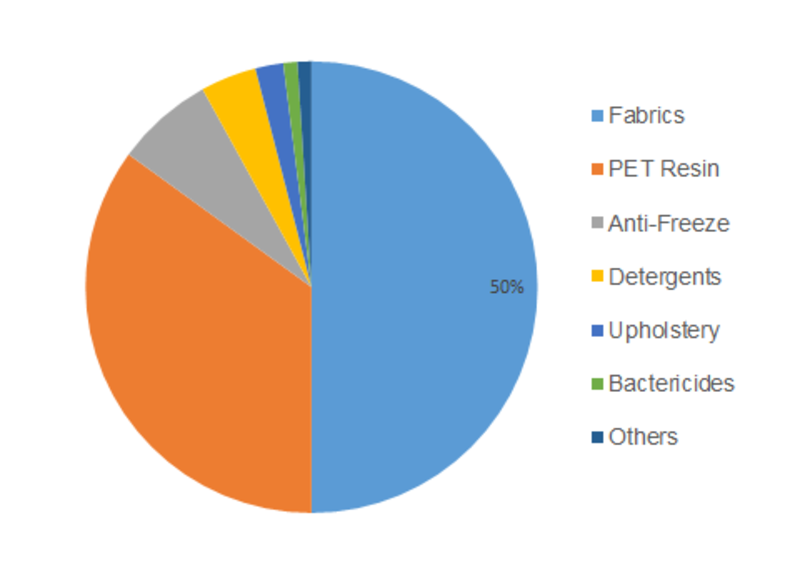 The market in Asia-Pacific accounted for the largest share of the fiber intermediates market in 2017 and is expected to continue its dominance during the forecast period. This growth can be attributed to the rapidly expanding textiles industry in developing economies such as India and China, which are home to a number of major textiles companies such as Fabindia Overseas Pvt Ltd and Bombay Dyeing, Shangtex Holding Co. Ltd, and Shandong Demian Group. According to the Indian Brand Equity Foundation, the Indian textiles market is expected to reach USD 226 billion by 2023 from USD 137 billion in 2016.

North America is another prominent market for fiber intermediates owing to supportive government policies promoting domestic manufacturing in the US. According to the National Council of Textile Organizations, the value of US man-made fiber and filament, textiles, and apparel shipments has increased by 3.70% from 2022-2030 to reach USD 74.4 billion.

The market in Europe is expected to grow at a healthy CAGR during the review period on account of the expanding packaging industry with the rising demand for packaged food and beverages. Furthermore, government regulations, such as the ban on landfills to reduce plastic pollution, have stimulated the demand for PET-based packaged products, which is likely to drive the growth of the fiber intermediates market.

The markets in Latin American and the Middle East & Africa are expected to witness significant growth during the review period on account of the growing packaging industry with increasing consumption of packaged food and beverages.

The global fiber intermediates market has been segmented by type, application, and region.

Based on type, the market has been segmented into paraxylene, acrylonitrile, cyclohexanone, ethylene glycol, polyethylene, ethylene oxide, and others.

Based on application, the market has been divided into fabrics, PET resin, anti-freeze, detergents, upholstery, bactericides, and others.

Based on region, the market has been segmented into North America, Europe, Asia-Pacific, Latin America, and the Middle East & Africa.

June 2021 - Teijin Ltd. reported that their Tenax carbon fiber prepreg had been used in a nacelle (a streamlined housing or tank) for Airbus' next-generation aviation engine demonstration, the UltraFan. Airbus will receive a prototype of the nacelle part developed by Nikkiso Co., Ltd. for the Propulsion of Tomorrow project before the end of 2021. Teijin plans to strengthen its carbon fiber and intermediate material operations to contribute to greater global sustainability, to become a firm that supports the future society.

May 2021 - CCM Hockey, a global designer, manufacturer, and marketer of hockey equipment, has renewed its relationship with Sigmatex, a developer of carbon fiber fabrics. For many years, Sigmatex and CCM have been exclusive partners. The alliance, which is focused on performance and innovation, has helped CCM maintain its leadership position in the hockey stick category while also positioning Sigmatex as a vital supplier in top sports performance.

What are the major types and application areas of fiber intermediates?

Paraxylene, cyclohexanone, acrylonitrile, ethylene glycol, polyethylene, and ethylene glycol, others are some of the major types of fiber intermediates, which find applications in fabrics, anti-freeze, pet resin, and others.

What are the major driving forces behind the growth of the global fiber intermediates market?

Increasing use in the manufacturing of synthetic fibers such as polyester & nylon, fabrics, plastic, and disinfectants.

Which region holds the largest share in the global fiber intermediates market?

Who are the top players in the global fiber intermediates market?

What are the key growth strategies of fiber intermediates industry players?

Strategic initiatives such as mergers & acquisitions, collaborations, expansion, and technology/ product launch are some of the growth strategies that players operating in the global fiber intermediates market adopt to gain a larger competitive advantage.