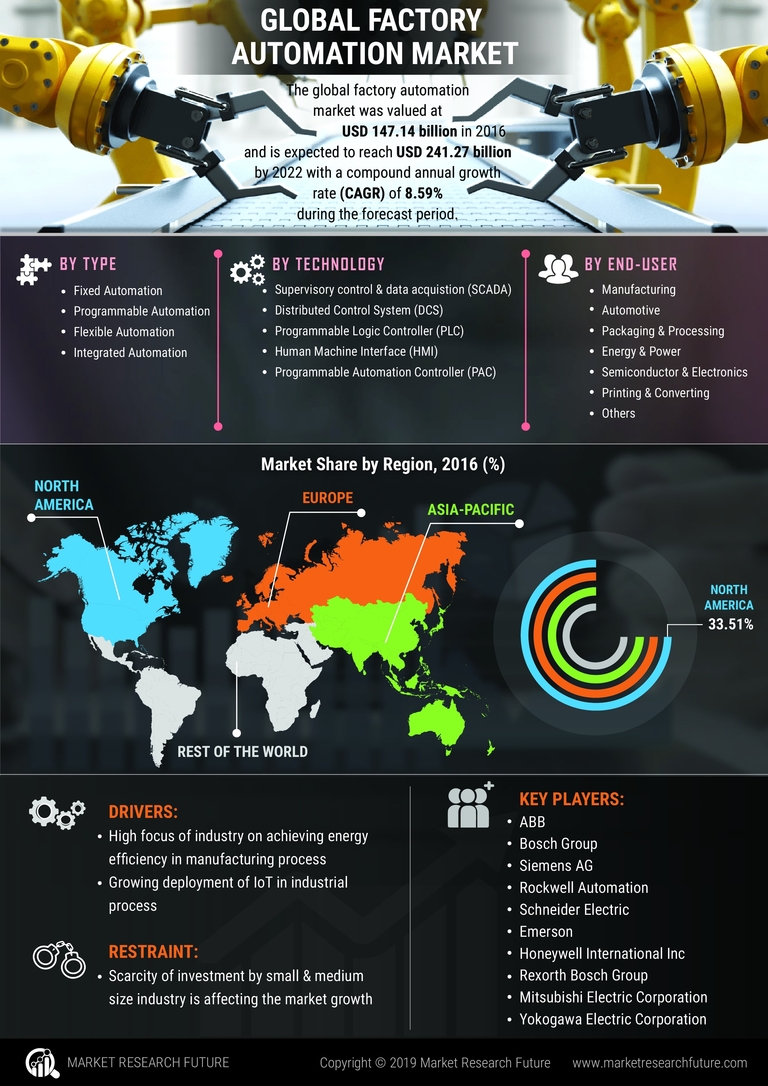 Globally, the size of the Factory Automation Market is expected to reach USD 216.2 Billion by 2030 at a CAGR of 7.2% driven by, Automation has come to be seen as the use of machines to reduce human labour.Industrial robotization incorporates the mechanization innovations and control gadgets, which are conveyed in the computerizing machines. PC programming and modern robots are progressively used in enterprises to deal with different cycles to develop efficiency and productivity further. A few current areas that incorporate oil and gas businesses, synthetic substances, materials, clinical sites and other urgent enterprises are progressively conveying the computerization procedures.

In a few assembling enterprises, the approach of Digital Twin and AR innovation is acquiring prominence as they decrease the execution risk and the costs brought about by the support. The product is very sensible and powerful in the general situation. Also, cloud frameworks, intelligent sensors and other advanced innovations are moving in the production line mechanization market.

Expanding the efficiency with insignificant assembling costs is the essential characteristic of the production line computerization innovation, which is considered the invigorating development variable for the Factory Automation Industry. A few nations progressively put resources into carbon-free strategies that incorporate eco-friendly procedures. Particularly the end-client ventures like cars are zeroing in on such procedures. Such factors are considered the significant driving variables of the Factory Automation Industry.

Expanding reception of market 4.0 across the globe is introducing rewarding an open door for the Factory Automation market. Then again, the public authority drives for the further advancement of the production line robotization market likewise affects the general development of the market.

The global market for Factory Automation has witnessed significant growth over the forecast period due to the growing digital content. There are several domestic, regional, and global players operating in the Factory Automation Industry who continuously strive to gain a significant share of the overall market.

During the study, MRFR has analyzed some of the major players in the global Factory Automation market who have contributed to the global market growth.

One of the main market players, ABB, has reported the condition-based support administration for the singular robots. The original innovation is intended to offer enhanced robot execution sent to the assembling enterprises. The approach of computerized twin programming arrangement is causing a buzz across a few modern verticals. The product arrangement is supposed to decrease the chance of that ascent during the execution and layout expected enhancements in the assembling area.

Over COVID-19 has impacted various industries around the world, resulting in travel bans, global lockdown, and a slowdown in various businesses' supply chains. The semiconductor industry has also been severely impacted by the ongoing unprecedented event, with revenues plummeting as a result of the uncertain positioning of digital devices. Despite the growing uncertainties, semiconductor manufacturers, particularly chipmakers, are attempting to maintain operations and develop long-term strategies. Many semiconductor manufacturers collaborate with their partners and specific markets to maintain consistent business stability. For example, semiconductor manufacturers are constantly working on research, designs, and manufacturing processes while focusing on the health and safety of their employees. The semiconductor industry has felt the need to continue operations for their end users, including medical and healthcare technologies such as artificial intelligence, Industry 4.0, and 5G, which are working to combat the COVID-19 pandemic.

COVID-19 has severely impacted and disrupted supply chain hubs across the globe. China, one of the major manufacturing hubs, has registered a decline of ~14% in the production capacity and a decline of ~40% in global electronic component shipments. COVID-19 has infected the Global Value Chain hub, wherein China played an important role in providing raw materials, assembly of products, and final dispatch. The significant decline in the export includes textile raw materials, garments and clothing accessories, mechanical and electrical products, automatic data processing systems, central processing units, electrical equipment, and automobiles. The automated data processing system has witnessed a decline of approximately 30%. Moreover, in a survey on 2020, by the National Association of Manufacturers to observe the economic impact of COVID-19 on manufacturers, it was observed that 78% of manufacturers anticipate a financial hit, nearly 51% of the manufacturers anticipate a change in operations, and almost 35% of manufacturers face supply chain disruptions. Various components are required for the assembly of semiconductor devices. All sensor system manufacturers and other component providers are primarily impacted by component import and export restrictions.

The growth of the global Factory Automation market is driven by various factors, such rising demand for automation for qualitative & reliable manufacturing and rising government initiatives to enhance the adoption of industrial automation. However, the market's growth is likely to be hindered by the dearth of skilled & trained professionals and high investment cost of the factory automation systems.


The use of equipment to automate systems or production processes is referred to as automation in manufacturing. The ultimate goal is to boost efficiency by expanding production capacity or cutting expenses, or both. Automation has come to be seen as the use of machines to reduce human labor. It has become synonymous with electromechanical systems that may be programmed to execute a wide range of tasks. Manufacturers are increasingly using automation to improve precision, uniformity, and operational efficiency. Although automation helps boost output, it also emphasizes that factors such as reliable manufacturing influence production. Sensors and devices that monitor equipment and create user-friendly data, visuals, and other outputs often connect production lines and provide additional benefits such as reduced downtime, predictable maintenance, and improved decision making. The aforementioned factors drive the growth of the global factory automation market during the forecast period.


The convergence of technologies has enabled manufacturers to take the next step toward the fifth industrial revolution, in which different industrial automation systems collaborate and share resources. Companies must leverage on existing technologies, accelerate technology deployment, and unlock new sources of value to stay ahead of the curve. The industrial automation space has conventionally been resistant to innovation or early adoption of high-end technologies. Often, enterprises in this segment prefer to leverage proven technologies and standards to ensure safe, secure, and consistent operations. However, things have started to change rapidly with the advent of Industry 4.0. Industrial space has been impacted by incremental technology changes and rapid adoption of new systems and augmented networking architectures over the last decade.

The Factory Automation Market has been segmented based on type, Technology, End User and region.

Based on End User, the Factory Automation market has been segmented into Manufacturing, Automotive, Packaging & Processing, Energy & Power, Semiconductor & Electronics, Printing & Converting, Others.

Globally, the Factory Automation market has been categorized into five different regions—North America, Europe, Asia-Pacific, Middle East & Africa, and South America. Asia Pacific accounted for the largest market share, with a market value of USD 47,383.7 Million in 2020; it is expected to register a CAGR of 9.7% during the forecast period. Europe was the second-largest market in 2020, valued at USD 31,908.5 Million; it is projected to register CAGR of 9.3%.

Asia Pacific dominates the Factory Automation market. The existing infrastructure and major players in the region provide the regional market with ample opportunities for significant growth during the study period. In Europe, growing automotive manufacturing plants and high demand for processed food in the food processing industry have been positively impacting the factory automation market.

Furthermore, the increasing need to reduce manufacturing costs and the requirement for greater productivity and efficiency boosts the regional market's growth. Germany and the UK are the highest contributors to the factory automation market due to several automotive and aerospace companies such as ABB, Schneider Electric, and Siemens. The Asia-Pacific factory automation market, based on country, has been segmented into China, Japan, India, South Korea, Taiwan, Malaysia, Indonesia, Thailand, and the rest of Asia-Pacific. 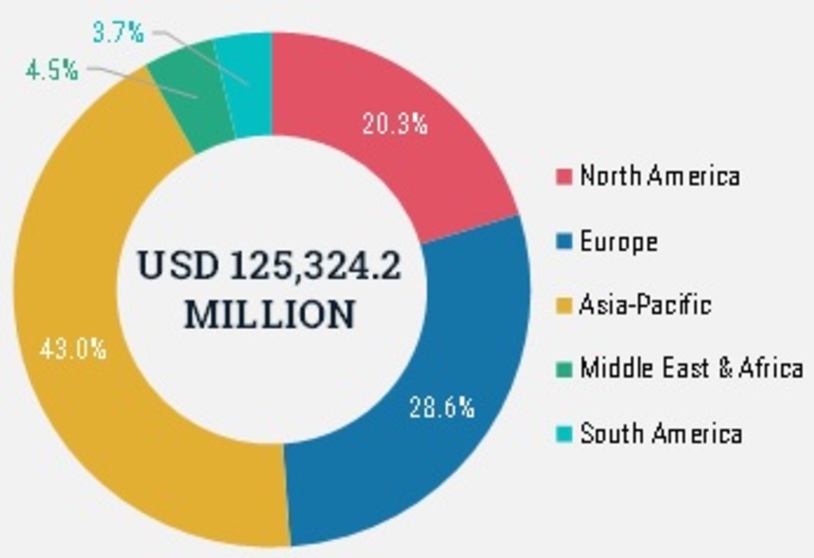 
The Asia-Pacific factory automation market, based on country, has been segmented into China, Japan, India, South Korea, Taiwan, Malaysia, Indonesia, Thailand, and the rest of Asia-Pacific. Asia-Pacific is expected to create scope for the fasteners market due to increased focus on enhancing process efficiencies and reducing production costs across various industry verticals. The key influencing factors in the region are the increasing number of government initiatives for digitalization, the growing demand for workplace safety, and enhanced efficiency in industrial processes. China is one of the significant revenue-generating countries in the Asia-Pacific factory automation market. The growing demand for automation in the Chinese automotive and manufacturing sector and the adoption of digital technologies are expected to drive the demand for factory automation in China.

This study estimates revenue growth at global, regional, and country levels and offers an overview of the latest developments in each of the sub-sectors from 2018 to 2030. For this analysis, MRFR segmented the global Factory Automation Market report based on type, technology, end user and region.

What is the CAGR of the Factory Automation Market in the upcoming period?

At 7.2% CAGR is expected to transform the market.

Who are the top players in the Factory Automation market?

What segments are utilized for better understanding the Factory Automation market?

The segments in the market are offering type, technology, end user,

Which region is a major driver in the Factory Automation market?

The Asia Pacific regional market is projected to be the major driver of the market.

The Factory Automation market in Europe is Expected to Witness Significant Growth at a CAGR of 9....