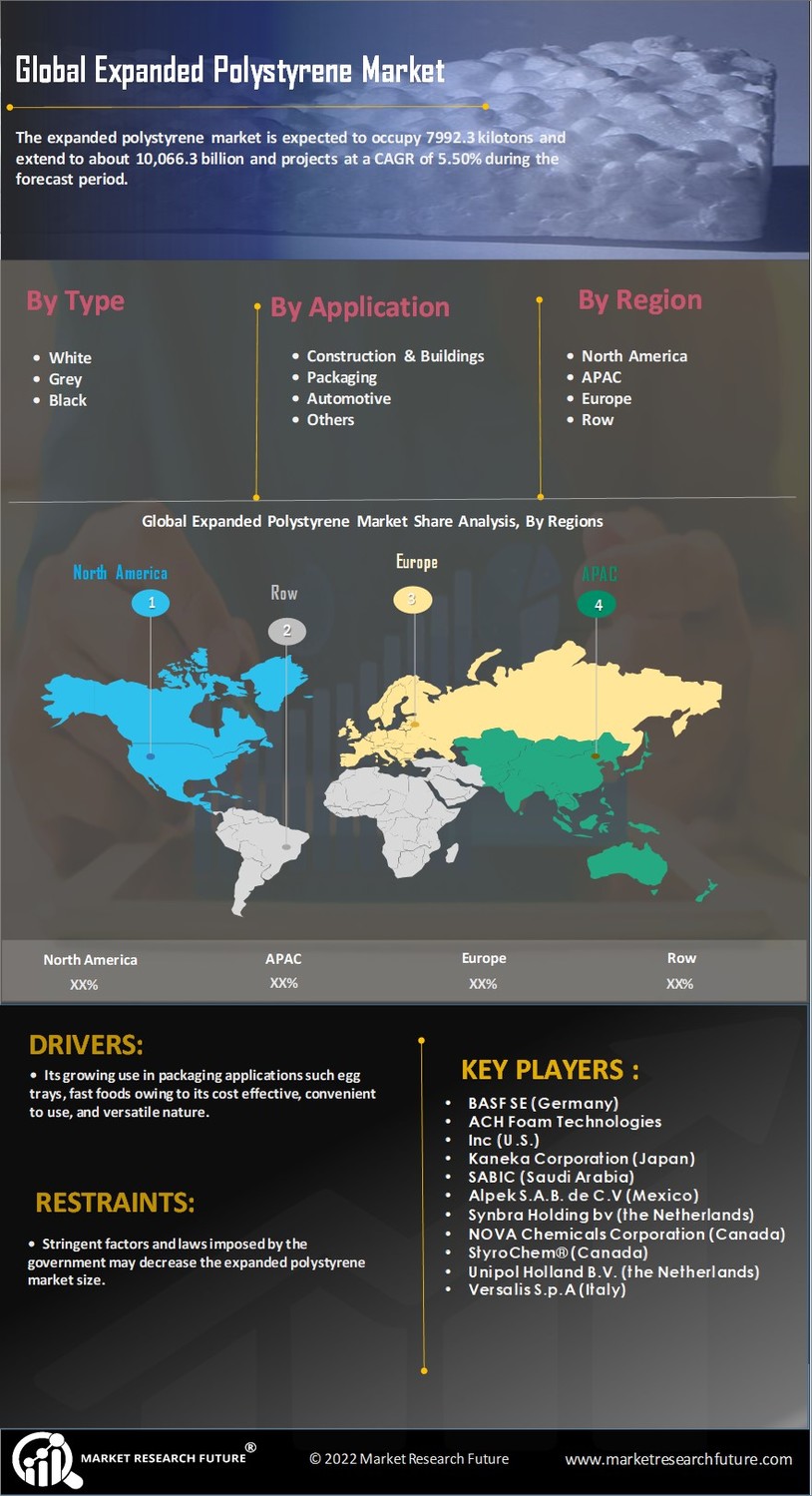 Globally and regionally the expanded polystyrene market is expected to occupy 7992.3 kilotons and extend to about 10,066.3 billion and projects at a CAGR of 5.50% during the forecast period of 2020 to 2030.

Globally and regionally the expanded polystyrene market is expected to occupy 7992.3 kilotons and extend to about 10,066.3 billion and projects at a CAGR of 5.50% during the forecast period of 2020 to 2030. Moreover, it has also been noticed that more than 65% of companies in the construction sector were being affected by the inactivities so carried out. Expanded Polystyrene formed by the polymerization process. This is a thermoplastic product composed of styrene beads. It is lightweight, has high durability and is resistant to moisture, extremely versatile. They are used for construction, building, automotive, and packaging.

The outbreak of the pandemic had a great impact on the industry. A change in consumer behavior and a transformation in the current market trends were marked. Due to the imposition of lockdown, many production units stopped manufacturing EPS products. The decline in the growth of the construction and automotive industry was observed, which made a huge impact on the overall market sector. The industry faced an economic disruption.

The government of many states imposed certain restrictions for the safety of nationwide people. He made strict rules and regulations for wearing masks and using sanitizers regularly.


DriversProducts made from expanded polystyrene are convenient to use, cost-effective, and versatile. Its recyclable nature and biocompatible nature are the reasons lying behind the usage of polystyrene expanded polystyrene industries. The expansion of business in the construction industry helps in driving the growth of the industry. A special hike in energy prices is forcing the users to rise their thermal efficiency for minimizing their energy consumption thus acting as a growth drives for the market.OpportunitiesThe automotive industry is attracting manufacturers to donate a certain sum in this market. The growth in demand of emerging countries has given a great opportunity to the key players to cope up with the growth of markets. Recycling these products provides opportunities for expanding the growth of the business.ChallengesVariation in the costs of raw materials harms the manufacturing process of the market thus creating a huge challenge on the industry. Reduction in the availability of substituted solutions and materials also becomes a challenging factor.Cumulative GrowthThe growth of the expanded polystyrene market at first took place in the food industry where packing of food by bugger boxes and coffee cups were made. Highly using up of grey expanded polystyrene in construction purposes due to its insulating thermal property drives up the market. Its low water absorption capability, sound resistance capability, and mechanical resistance increase the growth of the market.RestraintsStringent factors and laws imposed by the government may decrease the expanded polystyrene market size.

Some of the competitors operating in the expanded polystyrene market are BASF SE of Germany, ACH Foam Technologies Inc of the United States, Kaneka Corporation of Japan, SABIC of Saudi Arabia, Alpek S.A.B de C.v of Mexico, Synbra Holding of the Netherlands, NOVA Chemicals Corporation of Cannada, StyroChem of Cannada, Unipol Holand B.V of the Netherlands and Versalis S.P of Italy and many more. Investing of funds, merging and acquisitions are the major strategies operating in the industrial sector.


The report gives market analysis about the geographical region spread out throughout the market. The EPS market summarises the proper segmentation of the markets. The report covers in-depth analysis about the expanded polystyrene market size and gives information about the forecast of its expansion majorly in the emerging countries.

What is the significance of the North American region?

What is the significance of the European market?

The European market has increased its value and volume due to it following the rules and regulations of the government. The government has been impressed by the use up of lightweight and biocompatible ex[anded polystyrene products. Here market has experienced growth in all the sectors. Manufacturing of innovative products by using advanced technology helps in steering up the market in the regions of the United Kingdom, France, Italy.

Latin American region experiences development due to rise in usage of low density, humid obstruction materials, using the environment-friendly products enhances the expanded polystyrene market value. The Middle East and African regions are expanding their business due to the use of polystyrene in buildings and construction purposes.

Why building and construction are expected to be the largest segment?

It is the dominant and fastest-growing market where the expanded polystyrene products have physical and mechanical properties satisfying the insulating needs. It is the greatest choice for green building construction and offers environmental benefits which increase energy efficiency which improves the quality of the environment.

What are the challenging factors in the region?

What is the new marketing? Trends that are being adopted in the industry?

Floorings and ceiling sector covers the largest portion of their market followed by roofing systems. EPS is being preferred for roofing systems because it gives proper thermal insulation to them.

Growing demand of Expanded Polystyrene from the Packaging Industry is estimated to drive the mark...