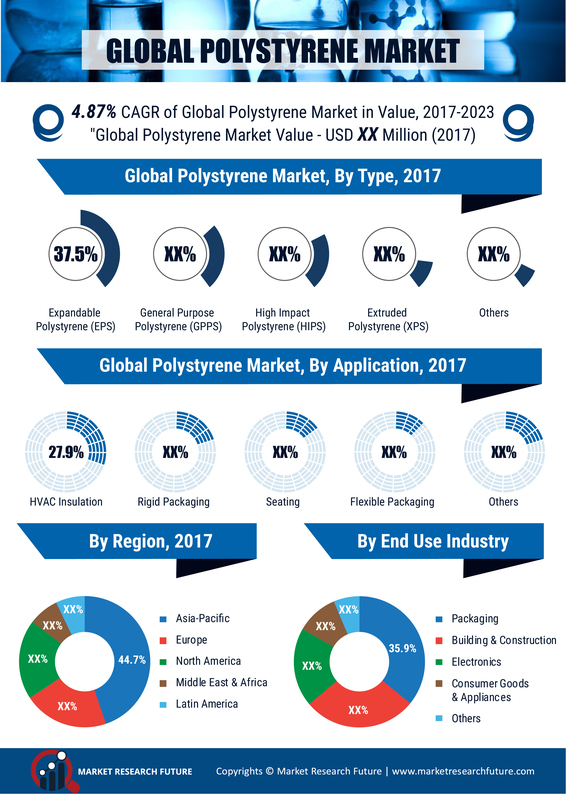 Market Research Future (MRFR) forecasts the Polystyrene market size to cross over USD 39.50 Billion at an expected CAGR of 5.50% over the 2022-2030 forecast periods. The global demand for polystyrene derives much of its development from the expanded use of expandable polystyrene (EPS) in HVAC insulation applications.The growth of the electronics and packaging industries is a result of rapid urbanization coupled with technology. The rising market sectors such as consumer products, medical devices, and protection are providing opportunities for the growth of the polystyrene industry.The state with the most population in Australia has banned several single-use plastic items, including straws, cutlery, and bowls. The new regulations in New South Wales also prohibit several face, body, and hair products that include plastic microbeads. They also outlaw polystyrene foam food containers. Businesses that violate the rules risk tens of thousands of dollars in fines. The restrictions in New South Wales are a part of an effort to reduce waste on a national scale. Similar bans will be implemented by state officials in Queensland and Victoria the following year. Although environmental activists have praised the laws, they maintain that much more must be done. Currently, Australia recycles only 16% of its plastic packaging, falling short of the national goal of 70%.

The arrival of the global coronavirus pandemic across the globe has had a significant impact on the development of the building industry that is functioning in the global market premises especially for the ongoing forecast period of 2021-2028, following the pandemic. The stopping or slowing down building programs, restricting moves, stopping production, and labor shortages to curb the outbreak of COVID-19 are known to have majorly contributed to a subsequent and considerable reduction in the development of the construction industry on a large scale. This is likely to bar the global polystyrene market from expanding the use of polystyrene in construction applications on a global scale. The lack of skilled labor, market resources, and raw materials will impact the ability of the production and manufacturing units to maintain a constant supply of final products to meet the market demand, especially during the ongoing forecast period.

The rising investments and the collaborative efforts of the governments and market players are providing the polystyrene market report with opportunities for expansion in the period. The global market is also gearing up for expansion in the global regions owing to the splendid use of the market facilities and launching new product services, portfolios, and products in the international market during the forecast period ending in 2028.

The polystyrene market value is growing and the main reason behind this is the rising recent developments, investments, mergers, acquisitions, and joint ventures amongst the global market players that are on the way especially during the ongoing forecast period that will be ending in 2028. The prominent players of the global polystyrene market key Players are as follows:

There has been a growing demand for sustainable and lightweight solutions that offer extreme longevity, with a combination of increased thermal insulation, which is expected to fuel market developments for the polystyrene market trends. The growth in per capita income of the population in these countries has resulted in the buying of more packaged goods especially by the emerging middle class. The demand and production for manufactured products have increased the use of polystyrene for their packaging.In a statement, Foam Holdings, a portfolio company of Wynnchurch Capital, L.P., announced the purchases of Amvic, Inc., and Concrete Block Insulating Systems, Inc. Amvic, with its corporate office in Toronto, Ontario, is a market-leading producer of radiant heat flooring, expanded polystyrene insulated concrete forms, and other building and insulation products. The Massachusetts-based company CBIS produces insulated containers and premade concrete block insulation systems made of EPS. Both are founder-led companies with the best reputations for quality and service and decades of product innovation. To better serve clients across North America, Foam Holdings has expanded its product line and geographic reach through these acquisitions.

However, there has been an increasing substitution of heavy metals for lightweight materials. This is expected to fuel the demand and growth during the ongoing forecast period. There is a big constraint on the way of the polystyrene industry growth that are the rigorous restrictions on plastic products. The risks involved in the processing, manufacturing, and using polystyrene are specifically measured, supervised, and controlled by government departments, agencies, special tribunals, and regulators.

There has been an increase in the demand for green which is motivated by the growing impact of social causes, related to the development of a sense of community environmental responsibility followed by raising the degree of understandability of physical fitness, alongside the increasing developments in sustainable business practices. All these factors are related to the ultimate use of technology, and hence, the polystyrene market has excellent opportunities to dwell upon during the ongoing forecast period that will be ending in 2028.

The polystyrene market trends show that the developments of the global industry have been fulfilling during the forecast period of 2021-2028. The market report conducts a detailed segment overview of the market which includes the following:

Based on the market application

The polystyrene market has been divided based on the market application and includes Rigid Packaging, Flexible Packaging, Seating, HVAC Insulation, amongst others.

Based on the End-Use Industry

The global market is witnessing excellent growth from end-use industries like Packaging, Electronics, Building and Construction, Consumer Goods, and Appliances, amongst the others.

During the historic forecast period that had ended in 2018, with a 44.7 percent share of the overall market, the Asia Pacific region emerged as the main market for polystyrene market growth. The Asian Pacific region has experienced high growth in the building industry in recent years, with a stable degree of economic growth. For the global polystyrene market, the rising trends related to urbanization are being coupled with infrastructural projects that are known to offer lucrative growth opportunities. In addition, the is a growth in the food & beverage industry, especially in China, which shows a positive trend in the years to come, as a part of the forecast period that will be ending in 2028. Another growth factor for the APAC polystyrene industry is that the global market is witnessing a rise in regulatory support and government policies that encourage investment at the domestic level, thus, helping the market to grow at the global market premises. Europe is likely to witness the second-largest expansion and growth during the ongoing forecast period that will be ending in 2028. For the historic forecast period that had ended in 2019, the European market had shown signs of excellent growth.

October 2021- The Lismore Recycling & Recovery Centre deploys the latest machine, which can recycle polystyrene to assist the facility in dealing with it. The center received funding from the NSW Environment Protection Authority. The center's Commercial Services Business Manager said that the council has continually recycled polystyrene. However, the latest machine helps in boosting the capacity. The Commercial Services Business Manager said that the NSW EPA Better Waste and Recycling Fund, back in 2009, enabled Lismore City Council to be one of the first Australian councils to have a devoted polystyrene recycling machine, and now with this funding in 2021, the center has upgraded the recycling capacity.September 2021- The New York State Department of Environmental Conservation (NYSDEC) has offered guidelines prohibiting extended polystyrene foam containers and loose fill packaging, usually called packing peanuts, beginning in 2022. The ban will comprise any foam "clamshell" containers, trays, lids, cups, and other products developed for temporary or single-use. This new guideline aims to build off other waste-reducing measures the state has imposed in past years, such as the ban on plastic bags. The ban would even reduce the quantity of non-biodegradable litter disposed of every year in the environment. December 2020: Total, Intraplás and Yoplait announced their partnership to use certified chemically recycled polystyrene in yogurt pots. The test, led by Total in collaboration with Intraplás, which focused on the extrusion of plastic sheets for the food industry, and Yoplait, identifying chemical recycling in France as a possible route for recycling polystyrene.

November 2020: Agilyx, a leader in advanced recycling technology, and AmSty, the largest polystyrene producer in the Americas, announced the effective accomplishment of a fully circular pathway for polystyrene recycling.

The polystyrene market report studies the impact of the outbreak of coronavirus pandemic on the trends that will enhance the growth and productivity of the market. The market studies the report from the following mentioned aspects.

At what CAGR is the global polystyrene market projected to grow in the forecast period (2022-2030)?

What are the major end-user industries of polystyrene?

Which region holds the largest share in the global polystyrene market?

Who are the top players in the global polystyrene market?

What are the key growth strategies of polystyrene industry players?

Strategic initiatives such as mergers & acquisitions, collaborations, expansion, and technology/ product launch are some of the growth strategies that players operating in the global polystyrene market adopt to gain a larger competitive advantage.