Ethylene Dichloride Market Information by Application (Vinyl Chloride Monomer, Ethylene Amines, and Others), by End Use Industry (Construction, Automotive, Packaging, Furniture, Medical, and Others), and Region- Forecast till 2030 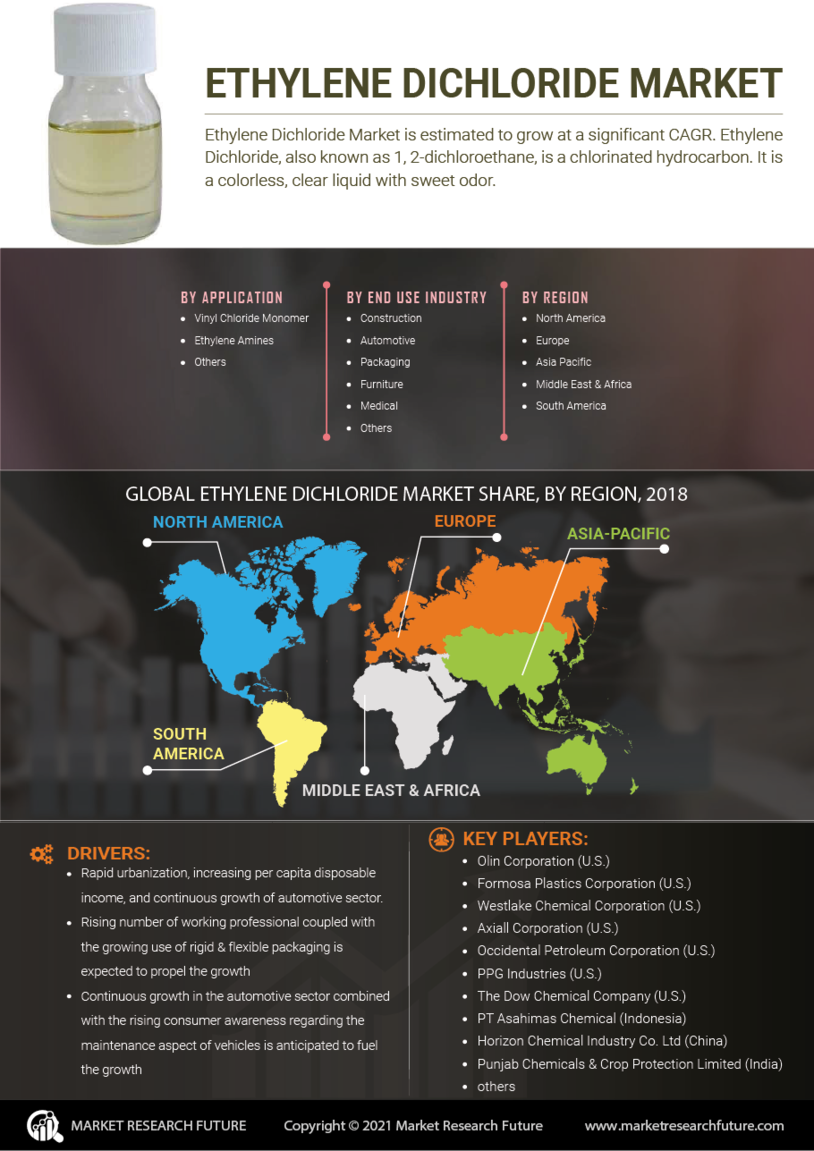 Ethylene Dichloride, also known as 1, 2-dichloroethane, is a chlorinated hydrocarbon. It is a colorless, clear liquid with sweet odor. It is majorly used as a chemical intermediate in the manufacturing of vinyl chloride monomer, which is further used in the production of polyvinyl chloride (PVC). The remainder material is used in the production of ethylene amines and other specialty chlorinated compounds. It does not accumulate in the aquatic food chain and is non-toxic to fish and aquatic organisms. Moreover, it is used in the production of consumer and industrial products and find wide application scope in numerous end use industries such as construction, automotive, packaging, medical, furniture, and others.

As per our analysis, some of the important market factors and trends identified in the Ethylene Dichloride Market include rapid urbanization, increasing per capita disposable income, and continuous growth of automotive sector. Furthermore, rising number of working professional coupled with the growing use of rigid & flexible packaging is expected to propel the growth of the market over the assessment period 2022-2030. Moreover, continuous growth in the automotive sector combined with the rising consumer awareness regarding the maintenance aspect of vehicles is anticipated to fuel the growth of the Ethylene Dichloride Market over the assessment period. Additionally, increasing demand for lightweight passenger vehicles and commercial vehicles have boosted the global automotive production, which is likely to raise the ethylene dichloride based products during the forecast period. Furthermore, rising investment in the construction activities such as college, hospital, and stadiums as well as expanding furniture sector in emerging economies are estimated to fuel the growth of the market. 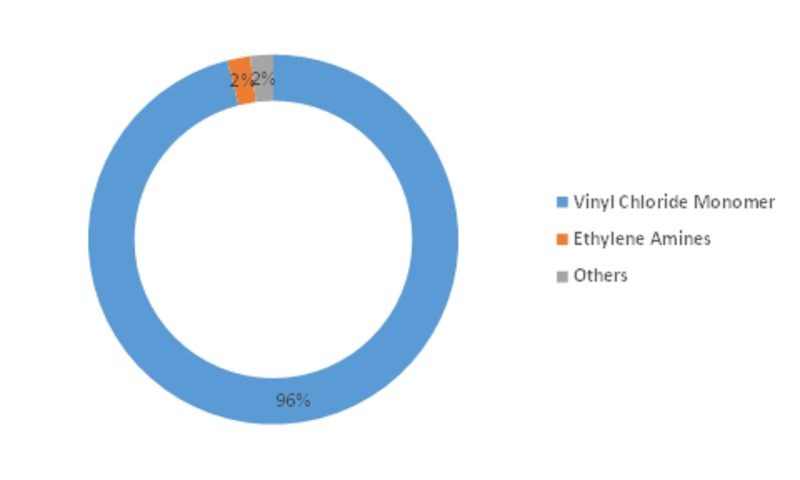 The Ethylene Dichloride Market consists of five regions: Asia Pacific, Europe, Latin America, North America, and the Middle East & Africa. Among these, Asia Pacific region is estimated to grow at the highest CAGR during the review period owing to expanding construction as well as automotive sector. The demand for Ethylene Dichloride is predicted to surge in various countries of Asia Pacific such as Bangladesh, China, India, Vietnam, Thailand, Malaysia, South Korea, and Japan on account of increasing middle class population along with the continuous growth of new purchase passenger cars and heavy duty vehicles. Additionally, rising number of light weight and heavy duty commercial vehicles on road, have significantly contributed to the Ethylene Dichloride Market. Furthermore, advancing technology and its high adoption rate is expected to propel the growth of the market during the assessment period 2017-2023. Some other prominent factors attributed to the market growth in Asia Pacific are availability of inexpensive labor and raw material, low set up manufacturing cost, and moderately strict regulatory framework.

Asia Pacific has emerged as the largest market for Ethylene Dichloride followed by Europe and North America. In Europe, the demand for ethylene dichloride is anticipated to grow in various countries such as Poland, the Netherlands, Italy, Germany, Spain, the UK, France, and Russia on account of rising expenditure in innovation and increasing purchasing power of consumers. Germany and the UK have emerged as the important consumer market due to growing automotive production and sales along with the huge investments in research & development activities. Moreover, GDP for nearly all European countries is increasing along with the rising construction activities with nearly around 3% per annum, which, in turn, is predicted to fuel the Ethylene Dichloride Market Growth. Latin American countries such as Argentina, Peru, Colombia, and Brazil are also estimated to witness a moderate growth on account of rising consumer spending on passenger cars.

North America is predicted to witness a moderate growth due to high consumption potential, rising production capacities, and increasing economic growth rate. In North America, countries such as the U.S. and Canada are among the major contributors to the regional growth of Ethylene Dichloride Market and are estimated to see a significant demand for Ethylene Dichloride during the assessment period 2017-2023. The U.S accounts for the largest market share and is followed by Canada in terms of value and is expected to grow with the steady CAGR on account of continuous growth in packaging and pharmaceutical sector. The Middle East & Africa is estimated to witness a significant growth over the forecast period due to tremendous growth in building & construction activities.

December 2021- Reliance Industries (RIL) is setting up the company's first funding in West Asia Abu Dhabi Chemical Derivatives Company RSC (trading as TA'ZIZ). In the company's statement, both the firms
A RIL statement said the two have agreed to launch TA'ZIZ EDC & PVC, a chemical production partnership at the TA'ZIZ Industrial Chemicals Zone in Ruwais, Abu Dhabi. The statement further revealed that the latest joint venture would build and run a polyvinyl chloride (PVC), ethylene dichloride (EDC), and a chlor-alkali manufacturing plant, with a funding of over USD2 billion.

January 2021- Formosa Plastics USA has revealed its plans to construct the latest USD120 million vinyl chloride/ ethylene dichloride monomer reactor unit based at its Point Comfort, Texas, complex. The firm is looking out taxes from the school district and county, which houses the Point Comfort complex. The documents also state that the latest unit could be constructed at Formosa's Baton Rouge, Louisiana. The papers do not comprise information regarding the extra VCM or EDC capacity, nor do they offer a projection on when construction would start or a focus startup date.

What are the major uses of ethylene dichloride?

Ethylene dichloride is primarily used as a chemical intermediate in the production of vinyl chloride monomer, used in the manufacturing of polyvinyl chloride (PVC).

What are the major growth drivers for the global ethylene dichloride market?

Continuous growth in the automotive sector

Geographically, which is the largest market in the global ethylene dichloride market?

What are the key growth strategies of ethylene dichloride industry players?

Strategic initiatives such as mergers & acquisitions, collaborations, expansion, and technology/ product launch are some of the growth strategies that players operating in the global ethylene dichloride adopt to gain a larger competitive advantage.

Who are the top players in the global ethylene dichloride market?

Ethylene Dichloride: Rising Demand from Packaging as well as Automotive Industries will boost the...