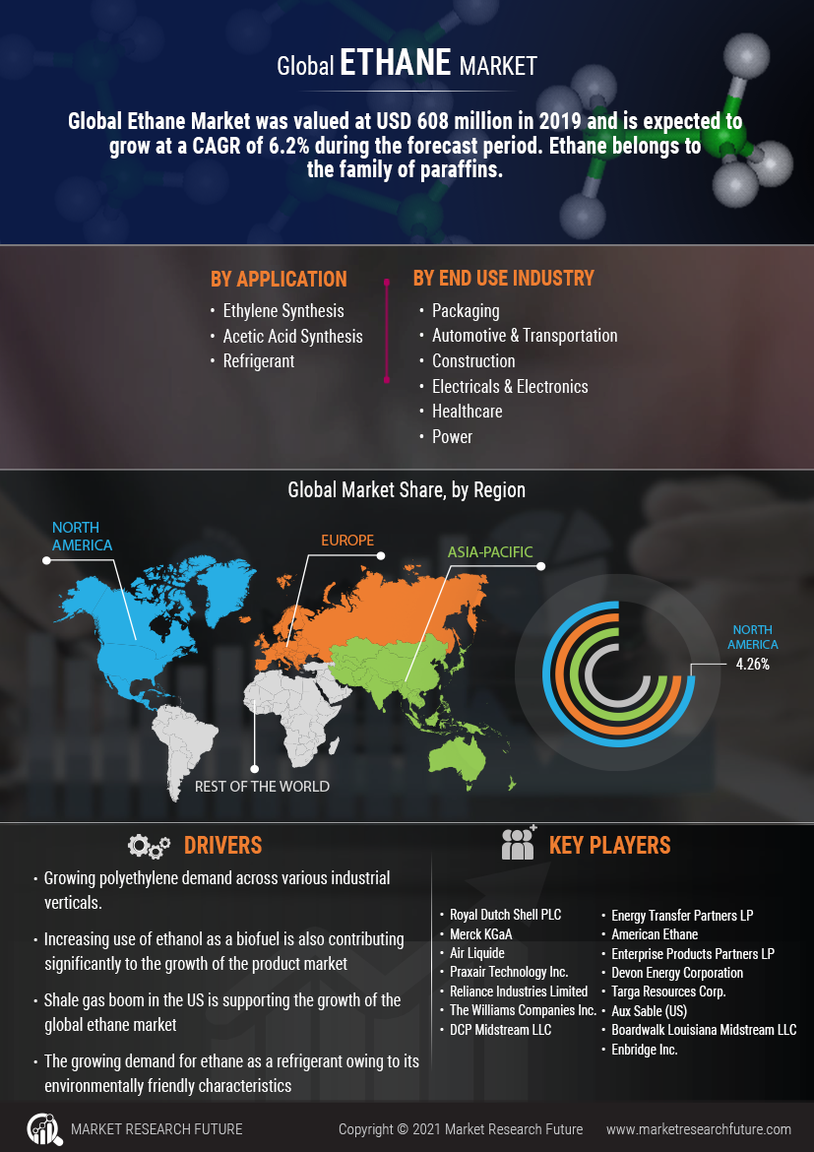 Ethane Market Size was valued at USD 0.53 billion in 2021. The ethane market industry is projected to grow from USD 0.54 Billion in 2022 to USD 0.70 billion by 2030, exhibiting a compound annual growth rate (CAGR) of 3.60% during the forecast period (2022 - 2030). Due to its negligible toxicity and minimally noticeable influence on the environment, demand for bio-based ethanol has surged. As they produce less environmental gases and achieve considerable energy security by reducing their reliance on crude oil imports, the pharmaceutical and transportation industries are becoming more and more popular for using bio-based ethanol are the key market drivers for the ethane market growth.


Since ethylene has a wide range of end uses across numerous end use sectors, its increased production rate is a significant factor in the expansion of the ethane market. For instance, ethylene is a crucial building block ingredient for the production of resins and plastics, according to a University of South Carolina research published in September 2021. Ethylene is manufactured ly in excess of any other organic compound, with an annual production rate of about 200 million tonnes. Ethane is primarily utilized to make ethylene, which is then employed by the petrochemical sector to generate a variety of intermediate goods, including plastics, natural gas, applications for power generation, and others. Ethane's rising production and inexpensive raw material prices have also led to an increase in consumption in the United States. These elements are anticipated to serve as one of the major forces boosting the industry.

The amount of oxygen present in the environment will, however, be reduced by the leaking of significant amounts of ethane gas, according to a report released by the New Jersey Department of Health and Senior Services. Since then, it is expected that the implementation of guidelines and particular criteria for the manufacture of ethane gas will impede the expansion of the ethane market CAGR during the course of the projection year. 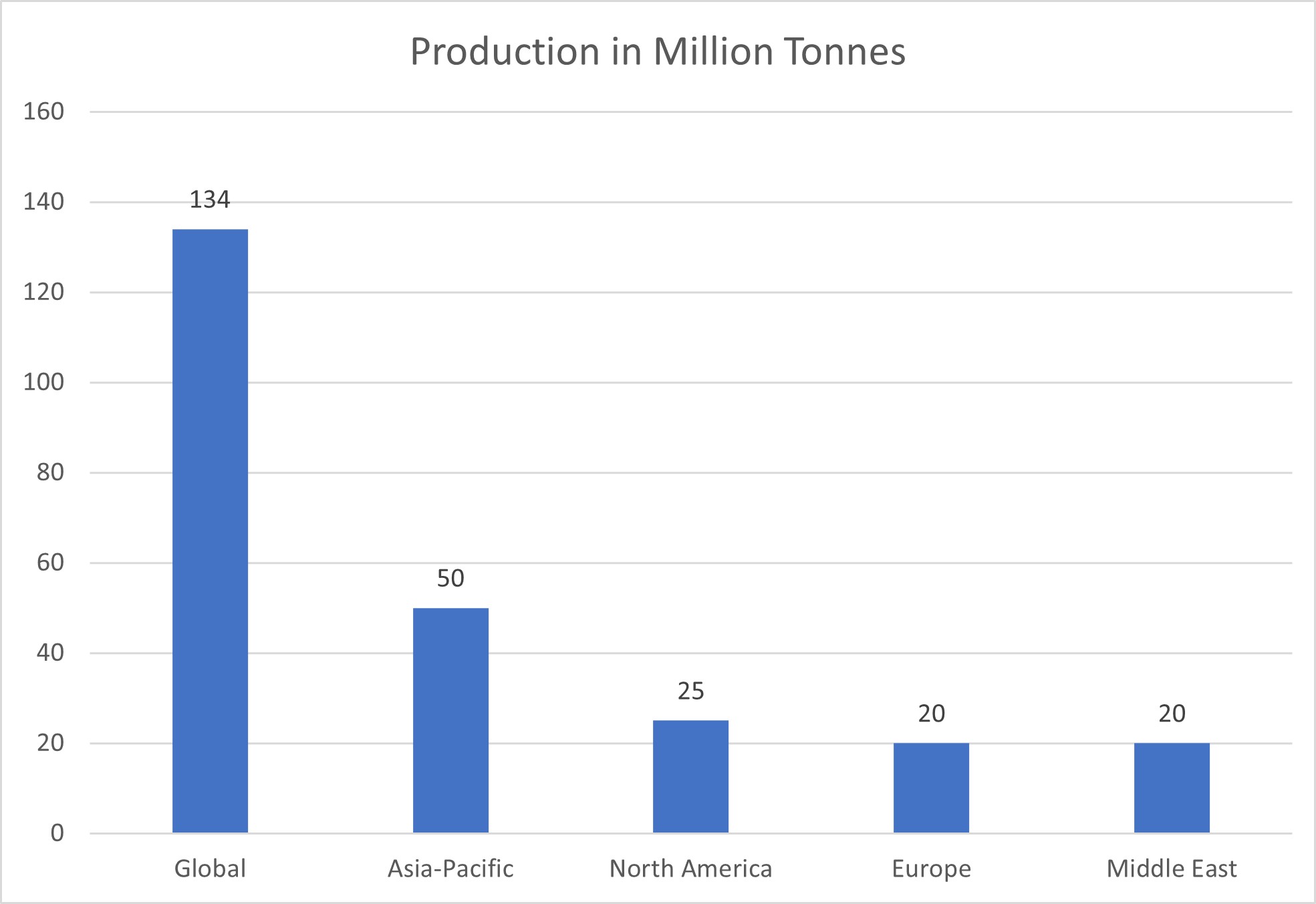 The demand for eco-friendly products has also increased consumer interest in natural gas. Additionally, the popularity of ethane gas has increased due to its low or nonexistent volatile organic compound (VOC) emission levels. Its production has also increased as a result of the rising demand for ethylene-based end uses like plastic and petroleum products, among others. This is expected to boost ethane market revenue in a number of end-use industries, opening up attractive market potential.

A new project called INEOS Cracker and Antwerp has been established, according to an IEA study released in March 2021, and it is slated to be developed in Belgium. By 2023, this facility will need 55 kb/d of ethane. The ethane market is projected to grow in the next years as a result of this major project event. Additionally, the Borouge Cracker 4 project in Ruwais, United Arab Emirates, has been scheduled and will require 83 kd/b of ethane by 2025. The ethane market data is anticipated to expand as a result of these forthcoming initiatives.

The ethane market segmentation, based on application, includes ethylene synthesis, acetic acid synthesis, and refrigerant. In 2021, the ethylene synthesis application category dominated the ethane market revenue. The Royal Society of Chemistry reported that 149.7 million tonnes of ethylene were generated worldwide in 2017. This element is predicted to boost the demand ly, which will support the ethylene synthesis application sector growth throughout the projection period. In addition, the development of the food, building, and manufacturing industries in both developed and developing nations has improved the performance of metals. The process of fabricating metal uses ethylene a lot. Ethylene is additionally utilised as an oxy-fuel gas in high-velocity thermal spraying, welding, and metal cutting. This is expected to be one of the main factors boosting the ethylene synthesis market in the expanding metal fabrication industry.

The ethane market segmentation, based on end-use industry, includes metal, polymer, and others. The plastic segment, which generated the most revenue in 2021, is expected to expand at a CAGR of 4.1% over the course of the projection year. One of the key industries in the United States today is the production of plastic, and during the projected period, this industry is anticipated to expand. For instance, the Plastic Business Association reported in a September 2022 article that the U.S. plastics industry generated a projected $432 billion in 2020 and $549.5 billion in 2021. This is expected to be one of the main factors influencing the expansion of the ethane market growth in the plastics sector.

Additionally, the need for it is being created as a result of manufacturers being under increased pressure to meet the expanding demand for plastic across a variety of end markets. A valuable NGL and a significant and affordable feedstock for plastics is ethane. These are the ethane market's sustaining characteristics, making it the sector of the plastics industry with the most lucrative potential. Hence, the rising use of ethane in plastic industry positively impacts the market growth during the forecast period.

January 2023: The $6 billion Ras Laffan Petrochemicals Complex, which is anticipated to be the largest of its kind in the Middle East, was the subject of a final investment decision announced by QatarEnergy and partner Chevron Phillips Chemical. The complex features an ethane cracker with a 2.1 million tonnes of ethylene per year capacity, and production is anticipated to start in 2026. This approval has further broadened the growth opportunity for the industry.

By Region, the study provides market insights into North America, Europe, Asia-Pacific and Rest of the World. Asia-Pacific Ethane market accounted for USD 0.23 billion in 2021 and is expected to exhibit a 43.90% CAGR growth during the study period. This is attributed to the expansion of several industries including plastic, automotive and transportation, and others across the region.

The Asia-Pacific ethane market is expected to grow at the fastest CAGR from 2022 to 2030. The Asia-Pacific region has experienced fast industrialization due to favourable investment policies, cheap manufacturing costs, and affordable labour, all of which have contributed significantly to the expansion of the region's ethane market. Additionally, ethane demand is being significantly boosted by sectors and users such as packaging, the automotive and transportation industries, building and construction, electrical and electronics, and the healthcare sector. Moreover, China ethane market held the largest market share, and the India ethane market was the fastest growing market in the Asia-Pacific region.

Major market players are spending a lot of money on R&D to increase their product lines, which will help the ethane market grow even more. Market participants are also taking a range of strategic initiatives to grow their worldwide footprint, with key market developments such as new product launches, contractual agreements, mergers and acquisitions, increased investments, and collaboration with other organizations. Competitors in the ethane industry must offer cost-effective items to expand and survive in an increasingly competitive and rising market environment.

One of the primary business strategies adopted by manufacturers in the ethane industry to benefit clients and expand the market sector is to manufacture locally to reduce operating costs. In recent years, the ethane industry has provided medicine with some of the most significant benefits. The ethane market major player such as Royal Dutch Shell PLC (the Netherlands), Merck KGaA (Germany), Air Liquide (France), Praxair Technology Inc. (US), Reliance Industries Limited (India), The Williams Companies Inc. (US), DCP Midstream LLC (US), Energy Transfer Partners LP (US), American Ethane (US), Enterprise Products Partners LP (US), Devon Energy Corporation (US), and others are working to expand the market demand by investing in research and development activities.

Royal Dutch Shell PLC (the Netherlands), also known as Dutch Koninklijke Nederlandse Shell NV, engages in the production, processing, and sale of crude oil and natural gas in more than 90 different nations. For numerous sectors, the company also produces chemical feedstocks. The Hague, Netherlands, is home to headquarters. For instance, in November 2022, Shell Chemical Appalachia LLC reported that Shell Polymers Monaca, a Pennsylvania Chemical project, has started operating (SPM). The Pennsylvania factory, which has a designed output of 1.6 million tonnes yearly, is the first significant polyethylene manufacturing complex in the Northeastern United States.

Also, an international supplier of engineering and construction solutions to the energy sector is McDermott International, Ltd. With over 40,000 workers and operations in over 54 nations, McDermott also has a diverse fleet of specialized maritime construction vessels and fabrication facilities. For instance, in October 2021, with China National Chemical Engineering and Construction Corp. Seven, Ltd., McDermott International Inc. (Houston) has signed a Letter of Guarantee to provide engineering and procurement for the ethylene cracker of the Gas Chemical Complex (GCC) project, the largest polyethylene integration project in the world (CC7). This agreement comes after McDermott successfully and safely completed the project's early works and front-end engineering design (FEED) phases.

Key Companies in the ethane market include

September 2020: Oil and gas company PTT PCL and Range Resources Corporation have a supply agreement for the delivery of 15000 bpd of ethane feedstock for PTT  Chemical America's ethane cracker in Ohio.

How much is the ethane market?

What is the growth rate of the ethane market?

Which region held the largest market share in the ethane market?

Asia-Pacific had the largest share in the ethane market

Who are the key players in the ethane market?

Which application led the ethane market?

The ethylene synthesis application category dominated the ethane market in 2021.

Which end-use industry had the largest market share in the ethane market?

The packaging had the largest share in the ethane market.