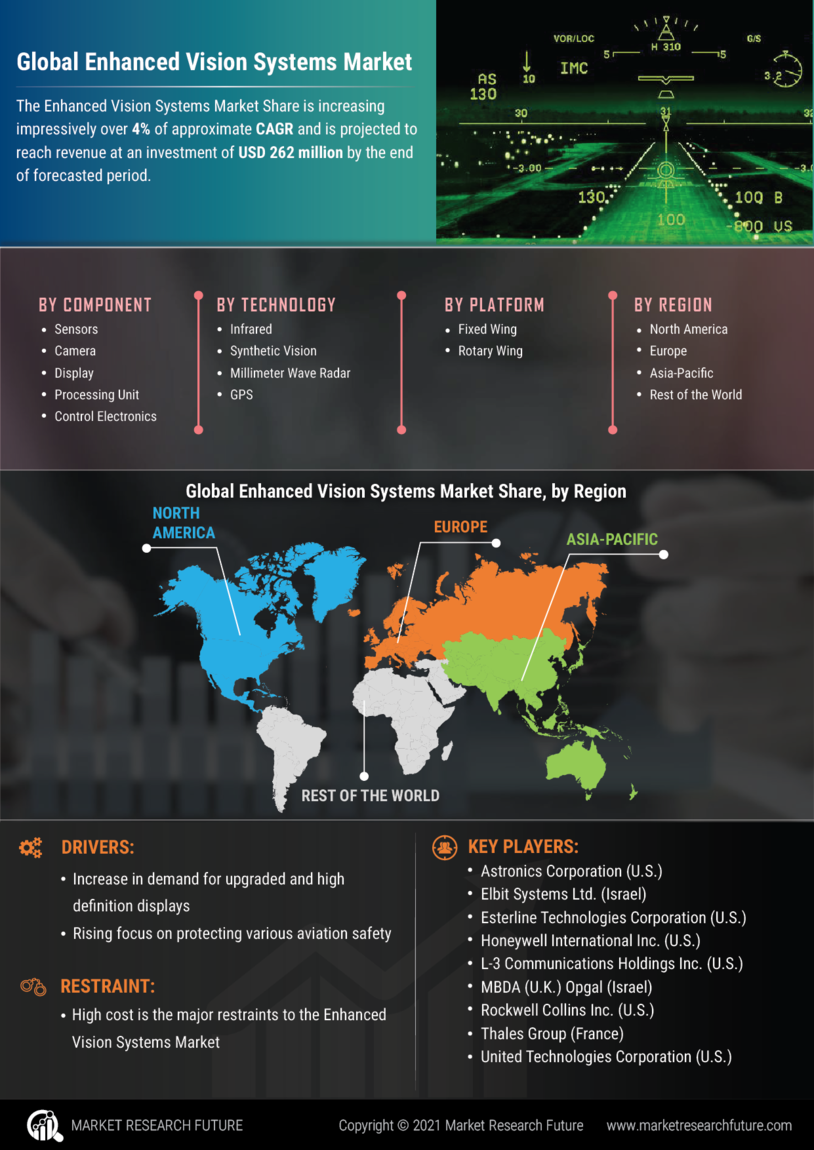 The world of technology is changing rapidly, and enhanced vision systems concept has recently come up with various technologies to provide safer approaches and landings procedures. Upgraded vision systems are assisting in upscaling different situational awareness, not only during the process of take-off, various approaches, and landing procedures but also during various ground maneuvering. This is one of the main and primary benefits of revolutionized vision systems. It also provides in assisting navigational aid to the main pilots, and hence it assists in reducing the total number of accidents. Global Enhanced Vision Systems provides better situational awareness assists in safer operations to dodge any mishaps. An upgraded and enhanced vision system also particularly allows pilots to conduct at various remote locations with incompetent airport facilities. For regular improvements of components, there is a rigorous amount of financial investment which is directly involved with a prolonged clearance process. These are various major market restraints that are causing restraints in the development of Enhanced Vision Systems Market.

The Enhanced Vision Systems Market Share is increasing impressively over 4% of approximate CAGR and is projected to reach revenue at an investment of USD 262 million by the end of forecasted period.

COVID 19 has impacted the Enhanced Vision Systems Market. Due to lockdown, the flights got canceled all over the world, which has seriously impacted the Enhanced Vision Systems Market Size. The major component like display unit is the most critical component of the enhanced and modernized flight vision system as it shows advanced infrared imagery and various graphical depiction of valuable data which is collected from different onboard sensors. It is basically found in the main pilot’s direct line of actual sight in the form of different types of head-up displays, various head-down displays, and various head-mounted displays. During the pandemic, there are plenty of factors such as a primary focus on achieving different reliable airline operations and increasing demand for several private and business jets is included. The global pandemic leads to several challenges to the Enhanced Vision Systems Market Size sector; it is affected all over the world. Major strategic developments are taking place. MNC are investing more because of the increasing demand from consumers across the globe.

There are plenty of factors that are fueling Enhanced Vision System (EVS) Market, such as the need for superior and developed situational awareness and increase in demand for upgraded and high definition displays are fueling the market spreading. Based on the basis of region, the Enhanced Vision Systems market is divided into North American region, European nation, Asia Pacific, Middle East countries & Africa, and Latin American region. The North America region is projected to lead the Global Enhanced Vision System (EVS) Market during the estimated period. This particular region is more technologically upgraded and has the strong existence of key basic original components and important equipment manufacturers, such as Honeywell International, Inc. (U.S.) Limited and Astronics Corporation (U.S.) Limited, who are making remarkable and significant investments in R&D for primary developing advanced and upgraded airborne electronics. It is to be noted, the rising focus on protecting various aviation safety is fueling the enhanced vision system (evs) market growth in this region. Not only this, the quickest growth is favorable to be a witness in the Asia Pacific region, which comprises of major key countries, such as China and India.

Global Enhanced Vision Systems Market has various growth opportunities, which is commonly termed as an advanced EFVS or EVS; it upgrades various situational awareness by applying various sensors onboard particular aircraft to aid the pilot with an upgraded display of the current outside environment. It also gives an opportunity to pilot with the strong and essential ability to properly function in different and various degraded and unseen several visual conditions, primarily including events like heavy fog, drastic rainfall, and many others. It is an utmost primary and very critical basic component to observe or conduct various flight operations, such as maximizing regular taxiing, daily takeoff, and others, in unforeseen or unfavorable airports.

The global, regional analysis of various locations of many things Global Enhanced Vision Systems Market is being studied for major regions such as Asia Pacific countries, North American countries, Europe and Rest of the World countries. It has been observed clearly that, North American countries are forecasted to force the enhanced vision systems market during the estimated period. In countries like the North American region, the enhanced vision systems market is driven by the presence of a large number of OCMs (original component manufacturers) and the presence of key market players like Honeywell International, Inc. Limited, and many others.

The global enhanced vision systems market has been divided on the basis of modern technology, basic component, modern platform, and basic regional division. The department of components segment consists of modern sensors, bigger and larger processing units, modern and enhanced control electronics, advanced cameras, and modern display. Basic Enhanced vision systems use sensors like latest and advanced infrared or radar to give a better and exact view of the outside world.

There are plenty of factors like better situational awareness and increasing demand for better and high definition displays that are accelerating the growth of the enhanced vision systems market. All across the globe, for example, North America, Europe, Asia Pacific, Middle East & Africa, and Latin America, the Enhanced Vision System market is spreading related to enhanced flight vision system market during the estimated period.

This increased growth can be basically attributed to the presence of large companies or OEMs (original equipment manufacturers), such as HALBIT Avionics Private Ltd (India) and Samtel Group Limited (India), demand for risen safety and reliable airline modern operations, and increasing and fluctuating weather conditions in the region

The Enhanced Vision System market players for are concentrating on up-gradation of advanced components; there is a frequent significant high amount of financial investment involved in the process.

What is the actual valuation of the enhanced vision systems market by 2025?

Which region consumes the largest?

Those who study this market growth claims to have a CAGR would be 4% during the forecast period.