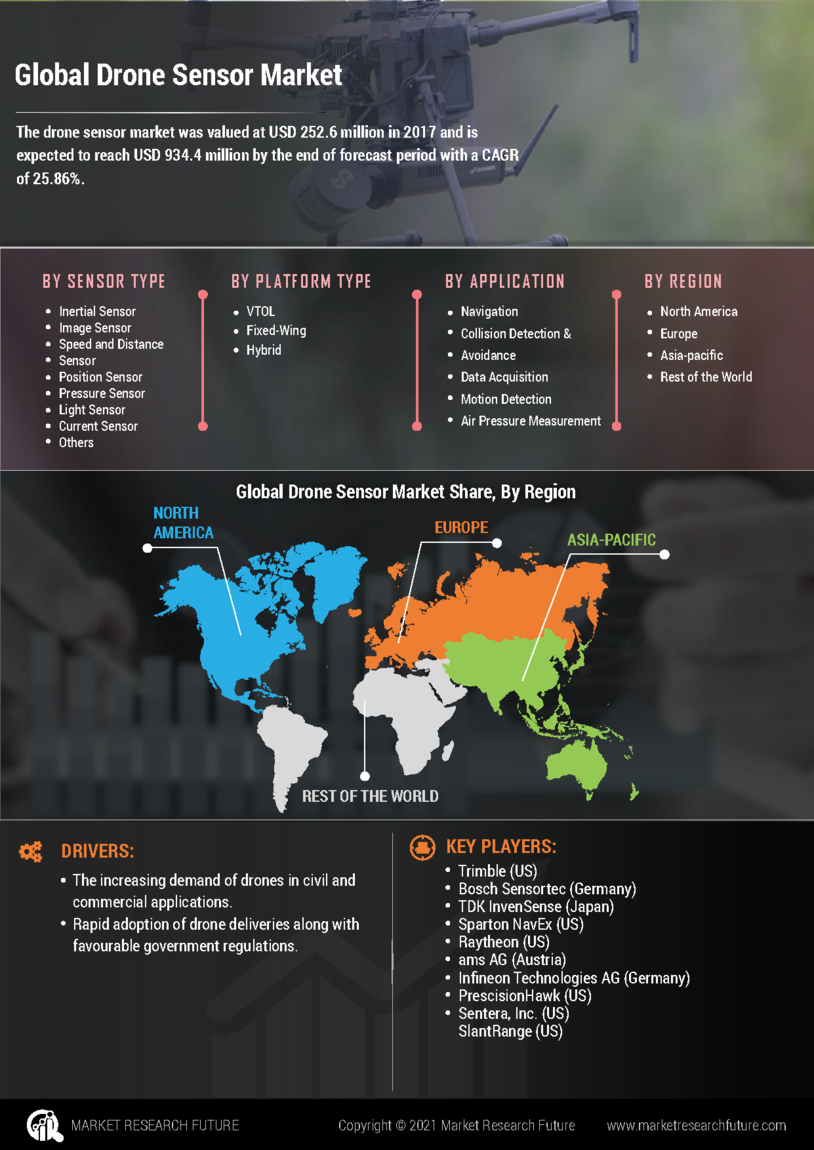 Globally, the size of Drone Sensor Market is set to grow at a CAGR of 25.86% from a value of USD 252.6 million in 2017 to hit USD 934.4 Million by 2027 driven by the high adoption of the unmanned system has been boosted by the demand for advanced sensors.

The market notices huge demand due to the higher demand for drones in civil and commercial applications. Drones are highly used in military operations for electronic warfare, intelligence, surveillance, reconnaissance, and strike missions. In the operational aerial, drones are essential during combat search and rescue. The usage of drones for advanced navigation and satellite communication is driving the Drone Sensor Market. Drones will reduce the collateral damage because of their features like searching, identifying, hovering, and striking targets, especially during military operations.

Hybrid platforms are the rapid growing platform for drone sensors in the forecast period. It has better advantages of high payload capacity and extended flight time; hence, its increased application in agriculture segments and military missions is diversely increasing.

The technology is receiving immense attention from different industrial verticals due to its features like superior photography and inspection abilities. The industrial players focus on smart sensors development for drone technology to detect multiple parameters in a system, like rain, humidity, temperature, and rain. The manufacturers focus on advanced technologies like artificial intelligence in drone sensors, making them recognize and assess the environment and react accordingly. These wide usages of drones will enhance the Drone Sensor Market performance.

The covid 19 pandemics have affected millions of people residing in 200 countries across the globe. However, the pandemic has been disrupted by several supply chains that severely lockdown the government's hands. Hence restrictions have affected the global economy that trade volumes due to the disturbed supply and demand. Moreover, it has been observed that drone technology has become one of the most useful applications that fight against the pandemic in public places.

Apart from that, drones have been particularly wide due to sanitization, blood sample surveys, and medical transportation. Hence, the stated factors have been increasing in demand for drones within the commercial government sectors across the world. Further, the effectiveness of the no contact delivery has been projected to fuel up the Drone Sensor Market growth within the future.

The high adoption of the unmanned system has been boosted up by the demand for advanced sensors. However, an increase in the unmanned system within the military operations had been calculated that includes the surveillance, reconnaissance, and targeting that owns the excellence of the flight capabilities. Hence, the global defense of the military has been assigned by USD 1.9 trillion in 2019. The growth has been credited to the rise of new intelligence that gathers striking capabilities within unmanned systems. Apart from that, the most important sensor has been the pressure censored sensors that stabilize the body, gyro meter, and barometric pressure sensors.

The key market opportunity has been idolized by the increased application of drones within the military sector, along with the defense and security for surveillance and media entertainment segments. Apart from that, the rapid adoption of drones has been idealized by the commercial sectors that propel the growth of the Drone Sensor Market. Hence, the development has been transferred by the ways of aerial photography that holds a position of USD 11 billion within the construction sector and USD 5.9 billion within the agricultural sectors.

An increase in the restarting factors has been considered to be a limited performance that regulated the High-cost association within the system. Hence, the increment in the unmanned systems within the military and commercial sectors has been owing to excellent data. The small size drones have been making a huge impact that has been implied within the applications such as commercial services and logistics. Further, it has been analyzed that the sensor has been capable of providing the perfect information that appears to be accurate and it senses information with positions, altitude, and pressure.

Challenges faced by the drone markets appear to be endurance and the brick size batteries that are considered to be safe and heavy. Further, the traffic and the obstacle detection have been concise that analyses that a drone needs to look for itself. This initiates the navigation issues and the communication issues.

The drone sensor market has been growing and is expected to reach nearly USD 11 billion within the construction industry and USD 5.9 billion within the agricultural sector in the forecast period. Hence, the CAGR appears to be 25.8 and the recorded market size of the market appears to be 44,567 in 2019. Whereas the market sensor has increased due to the high demand and in covid, the growth has been expected to propel even more with outstanding opportunities within the global market.

The drones and the drone sensors have been used in different perceptions that include the stabilization of the altitude and also hover capabilities for photography. Together, the barometric sensor enables the drone to fly successfully with precision. The demand for the Drone Sensor Market has increased and precisely it regulates the activation of the sensor marketing margins.

The segment overview has been analyzed by the Drone Sensor Market that has been considered within the inertial sensor and image sensor. Apart from that, the further segmentation has been calculated into accelerometers and the image sensor has been bifurcated into infrared and the speed and distance have been divided into lidar and radar into GPS and GNSS.

Moreover, the drone Sensor has been segmented into VTOL and that appears to be hybrid. Thus, the application of the drone Sensor Market has been divided into navigation and collision detection. The drone sensor market has been segmented into construction, media and management have been expected to contribute with a significant revenue share within the Drone Sensor Market. Apart from that, the defense and security segments have been expected to make a contribution with a significant share to the drone markets.

According to the drone Sensor Market, the estimated growth has been rated by the forecast period from 2018 to 2023. The geographical analysis of the market has been studied in North America, Europe, and other countries. Therefore, the regions mentioned have been increasing the application of drones within military security and also between the entertainment sector. This analysis has been expected to create a huge demand for the drone's sensor and has been expected to make the demand for the Drone Sensor Market within this region.

According to the recent update, the new companies that have been joining the market of the particular company have created a scenario for new innovations, and strategies. Therefore, competitive companies such as Trimble (US), TDKInvensense (US), and Raytheon.

AgEagle Aerial Systems Inc. is a global provider of full-stack drone sensors and software solutions for commercial and government/defence usage. It has been announced the third-place winner in the Hardware and Systems Design category of XCELLENCE Awards held by the Association for Uncrewed Vehicles Systems International for its eBee TAC Unmanned Aerial System (UAS). AgEagle is selected for its work in uncrewed systems technology. Winners were congratulated during the Technology Innovation XCELLENCE awards ceremony on April 27 in Orlando, Florida.

This particular report is entitled to provide all the important facts and information regarding the growth of the largest market share of the drone sensor within the forecast period. Apart from that, the different section has been available that helps to get within the depth information that includes mainly the opportunities, drivers, challenges, regional analysis, covid 19 analysis. Market segmentation, and others. Therefore, all of the facts collected have been from the primary and the secondary sources that provide the expected market growth of the drone sensor market by 2023.

What are the chief market boosters outlined in the report?

The mounting demand for drones in civil and commercial applications and the surge in AI and machine learning are the chief market boosters as outlined in the report.

What is the use of machine learning and AI in the market?

What are the types of sensors mentioned in the report?

Who are the end-users in the market?

The geographical distribution of the market covers which regions in the report?

North America, Europe, Asia-Pacific, and the rest of the world (including the Middle East, Africa, and Latin America) form the geographical distribution of the market.