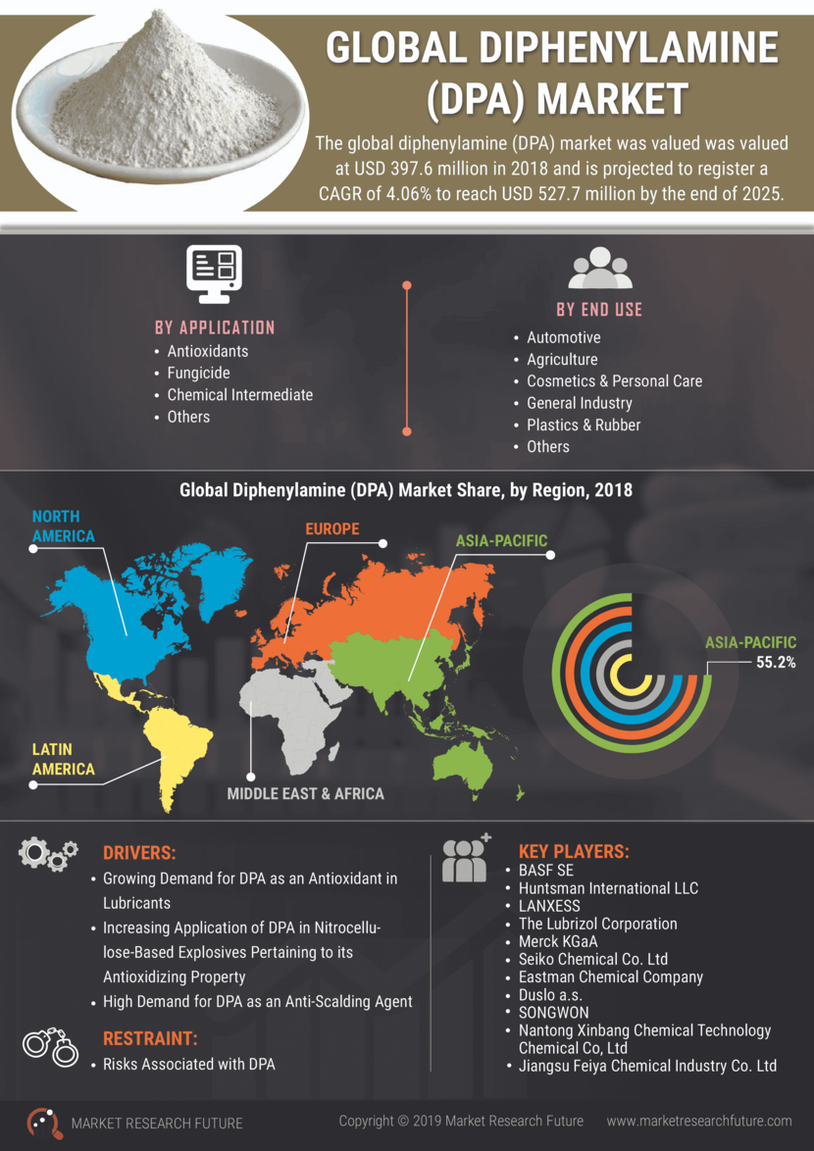 The Diphenylamine (DPA) Market is expecting to register a growth at a 4.06% CAGR  to reach around USD 527.7 Million by the end of the forecast period. Tremendous growth has been seen in the consumption of products that are made of plastic and polymer, which is expected to drive the global market growth during the forecast period. Moreover, the rising demand associated with nitrocellulose-based propellants and explosives is projected to fuel the global market growth in the research period. However, the global market for Diphenylamine (DPA) is expected to get affected due to the rising hazardous uses of pesticides, and fungicides, increasing environmental concerns among the population. The risk associated with Diphenylamine is projected to bring major challenges to the global market.

The global Diphenylamine Market has been segmented based on the application and end-user industry. Further, the application segment has been classified into chemical intermediates, fungicides, antioxidants, and others. Among these, the antioxidants segment is estimated to lead the global market growth during the forecast period. Moreover, the end-user segment is segregated into automotive and agriculture, personal care, cosmetics, plastics, and the rubber industry. Of these, the automotive segment is estimated to generate the largest market share during the forecast timeframe.

global pandemic concerning the speedy spread of coronavirus, let to major restraints and restrictions for the working of certain companies. Though the industry of health and wellness, medical and hospitality, experienced a boost during the pandemic, some sectors of the market have suffered much. Owing to the extent of the market services to different industries, like agriculture, there is a need for the wide use of antioxidant properties.

The government is showing interest and investments owing to the use of these in the industrial, as well as the automotive industry. The major advantage of the same is providing excellent protection against the oxidations of high temperature. This is one of the reasons, why this sector is witnessing investments and global expansion.

There is an emergence in the demand related to explosives along with propellants that are nitrocellulose-based. These are contributing to widening the demand at a great level, thus stimulating growth. The DPA Market Growth is also experiencing the application of DPA as fungicides in crop production. Also, the consumption of products made of polymer and plastic has increased tremendously. Hence, the market growth is largely driven by these inputs and factors.

Owing to the environmental concern, and the hazardous uses of fungicides, and pesticides, to both the crop, as well as, the health of any individual consuming the harvest, there has been a rising concern. This is turning to be a major restraint of DPA’s Application, in the agriculture sector, mainly. The growth is likely to be hampered due to environmental pollution, and land degradation concerns. The United States Environmental Protection Agency formulated that DPA is toxic for the health of aquatic animals.

The Diphenylamine Market Manufacturers extend the use of diphenylamine as a fungicide and make use of the same during the pre, and post-treatment of the harvest. Mostly, the use extended to superficial scalds in fruits like pears, and apples. It is also being used in the form of an antiozonant for manufacturing products like rubber and plastic. The use is also extended to the elastomers in the form of perfumes, pharmaceuticals, and dyes. There is a push in the increased demand for DPA to be used as a lubricant that is projecting a major global growth.

The Diphenylamine Market Uses are elaborating to different products and manufacturing units. The main use of DPA is in the form of a parent compound concerning the vulcanization of accelerators along with antioxidants for the plastic and rubber industry. DPA, along with its derivatives are added as an ingredient to the products made out of rubber. The main aim behind this is to stop the process of degradation by ozone, along with oxidants. DPA is widening its market and its application scope in the form of chemical intermediates and helping in the manufacturing of pH indicators, curing agents, lubricants, and polymers, dyes, automotive, and much more.

The Diphenylamine Market Forecast clarifies 3 segmentations of the global market. These segments include sub-divisions like:

The Diphenylamine Market Trends are bifurcated into chemical intermediates, antioxidants, fungicides, amongst others. Discussing the previous forecast year of 2018, antioxidants were dominating the market with a shared aggregate of 59.2%. A similar trend is expected for the forecast year of 2025. Antioxidants are considered a major ingredient for the production of functional fluids like lubricants explosives, and gun powders.

The Global SPA Market Forecast discusses personal care, automotive and agriculture, cosmetics, rubber, and plastics industry as the emergent industries. Automotives had the maximum share of 31.7% in the previous forecast of 2018. DPA forms a part of the manufacturing process. The major inputs for the growth are the compressor, refrigeration, and gear oil, turbine oil, transmission fluids, and much more.

The Diphenylamine Market Growth is more prevalent in world economies like the Asia Pacific, parts of Latin America, Middle East nations, Europe, parts of the North American regions. During the previous forecast year, the Asian-Pacific regions had the largest market, based on the geographical locations.

In 2018, Asia Pacific witnessed a rapid level of industrial growth in the manufacturing units of automotive and had a market share of 55.2%. This market is expected to grow at a 4.5% CAGR by the end of the current forecast year - 2025. In 2018, China had a considerably good market share and for 2025, the market is expecting growth at a CAGR of 5.5% approximately.

In 2018, North America was the second-largest growing market as it witnessed a boost in the industry dealing in cosmetics and personal care. Also, there was a steep rise in the use of DPA in automotive and crop-production. For the current forecast year of 2025, the expected growth amounts to 4%. Separately, the US is expecting to grow at a 4.01% CAGR in 2025. However, for Canada, the predicted growth stands at 3%.

There are many Diphenylamine Market Manufacturers dominating the market size and growth during the forecast period. The key players include:


The competitive landscape is quite moderate and distributed amongst firms like LANXESS, Nantong Xinbang Chemical Technology Chemical Co, Ltd, Duslo a.s., along with Jiangsu Feiya Chemical Industry Co. Ltd. There are some prominent reasons for the same like:

The prominent player SONGWON was introduced SONGNOX L670. It has been estimated that SONGNOX L670 will be used in collaboration with SONGNOX L135 along with the motive of stabilizing automobiles, engines, gear oils, and greases.

The market player LANXESS has taken over the well-known company that is popular for its DPA production levels, namely, Chemtura Corporation. Further, LANXESS is growing as a dominant market player by making an entry into the organometallics and additives businesses.


The DPA Market Report contains aspects for the qualitative and quantitative assessment of the industry analysis, with the help of experts and participants. There is an in-depth analysis of the macroeconomic indicators, government implications, and factors, market trends, depending on the segments stated. The historical, present, and the projected market size concerning the value and volume. There recent trends dominating the industry along with the neutral perspective for the forecasted growth in 2025 is discussed. The important and must-have points vital for the market players with the motive of sustaining and enhancing their reach are mentioned, as well.

What is the valuation of the global diphenylamine market?

What is the expected CAGR of the global market?

The global diphenylamine market is expected to exhibit a strong 4.06% CAGR over the forecast period from 2020 to 2027.

What is the leading driver for the diphenylamine market?

The leading driver for the market is the growing demand for DPA as an antioxidant in lubricants, the demand for which is increasing from the automotive and industrial sectors.

Which is the leading regional market for diphenylamine?

The leading regional market for diphenylamine is Asia Pacific, accounting for more than 55% of the global market in 2027.

What are the leading players in the diphenylamine market?

The leading players in the global market include BASF, Huntsman, Lanxess, Eastman Chemical Company, Lubrizol, Seiko, and Merck, among others.

What are the customizations available besides in the Global DPA Market?

The pricing analysis in general, and of the raw materials. Also, the regulatory framework of the general chemicals, along with the company profiles of the prevalent key players in the market, are the additional customizations available.

Increasing Application of Diphenylamine in the Automotive Industry is Expected to Propel the Grow...