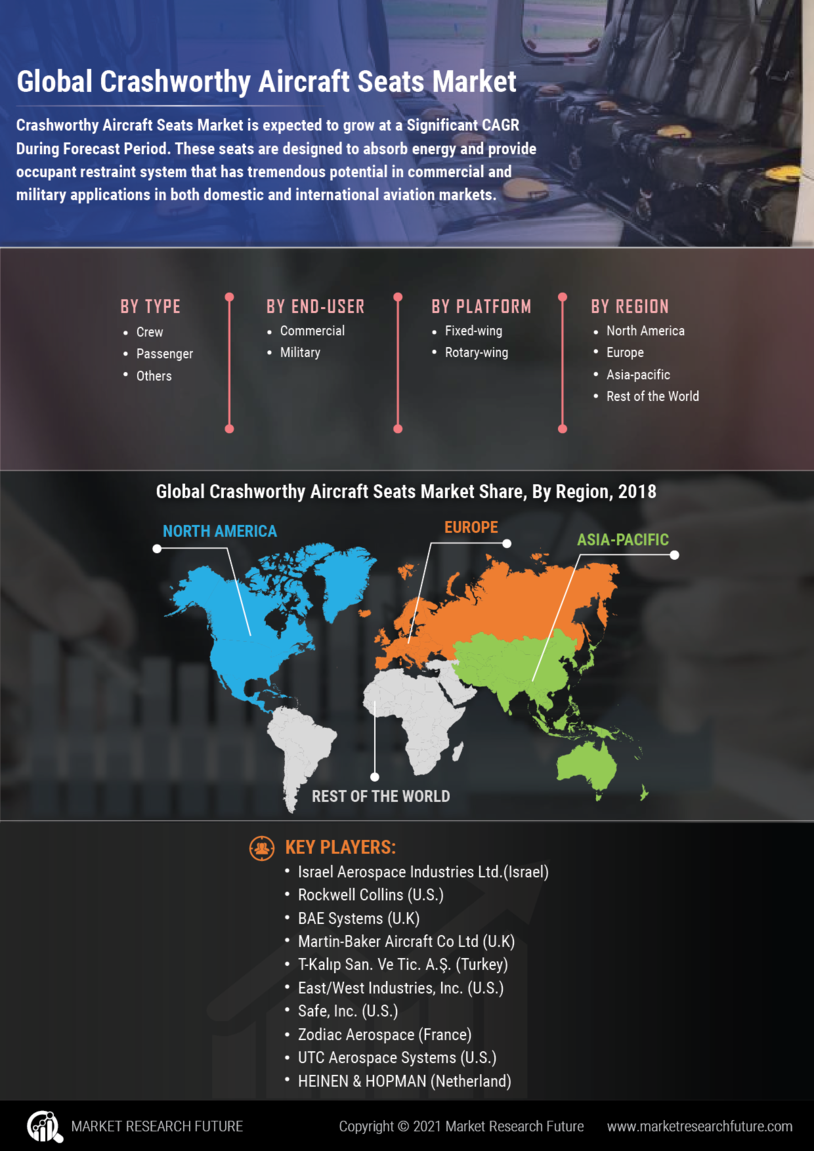 Passenger safety is vital in air travel. As a result, crashworthy aircraft seats have widespread usage in the aerospace industry. These seats are designed to absorb energy and provide occupant restraint system that has tremendous potential in commercial and military applications in both domestic and international aviation markets. The occupant restraint systems are intended to control occupant motion within an aircraft seat during a crash. The usage of these systems is a major contributor to mitigating crash fatalities and injuries, thereby, resulting in the growth of the market. Technology advancements in passenger safety would require highly advanced crashworthy aircraft seats. Significant investments have been made in the development of energy absorbing technology seats, which would lead to rapid growth of the market during the forecast period. However, major restraints of the Crashworthy Aircraft Seats Market include the high cost and increased seat weight due to the addition of occupant restraint system.

Aircraft have a large number of moveable parts and components integrated, which increases the possibilities of a potential malfunction. Therefore, if any of these components/parts break down, the aircraft would get out of control. Furthermore, there have been several aircraft accidents in recent years, due to which the passenger safety is one of the most important criteria for travelers. The rapidly increasing numbers of such accidents deter the travelers to travel in aircraft.

The increased need for lightweight seat design will offer new growth opportunities to the Crashworthy Aircraft Seats Market players. The factors responsible for market growth are innovation in aircraft fleet, rise in defense budgets, and high adoption rate of next-generation aircraft seats. Several contracts have been signed to bolster the growth of the market. For example, in 2011, BAE Systems signed a contract with the U.S. Air Force to provide crashworthy seats for the C-l30 aircraft. Moreover, the growing concern towards aviation safety has resulted in the growth of the market. For instance, in 2013, Israel Aerospace Industries signed a contract with Bell Helicopter Textron Inc. to provide crashworthy passenger seats for the latter’s 525 Relentless helicopters. Similarly, in the year 2012, Safe Inc. signed a contract with the US Army to provide innovative troop seat restraint systems in military rotorcrafts.

The Crashworthy Aircraft Seats Market has been segmented by type, end-user, platform, and region. By type, the crew seat is the most widely used and had the largest market share, in 2017. By end-users, the military segment is estimated to witness the largest demand during the forecast period, owing to the high adoption rate of crashworthy seats by the military. By platform, the fixed-wing segment would witness the largest growth during the forecast period, owing to the increasing demand for commercial and military fixed wing aircraft, in the recent years. 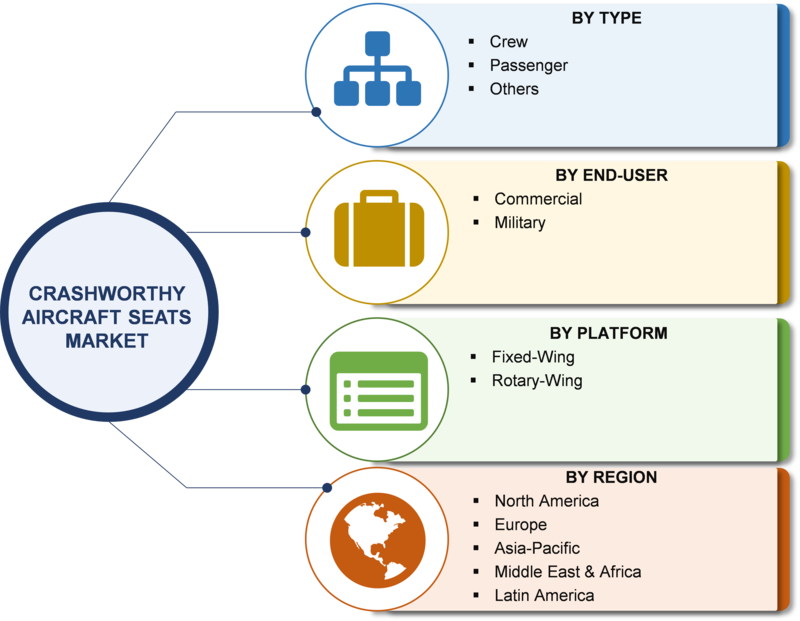 By region, the market is segmented into North America, Asia-Pacific, Europe, the Middle East & Africa, and Latin America. In 2017, North America dominated the market due to the increasing investments in modern aircraft. Concurrently, Europe is estimated to trail North America, during the forecast period, in the global crashworthy aircraft seat market, due to a large number of commercial aircraft operating in this region. As a result of the increasing demand for air safety, coupled with the rising adoption of aircraft, the global crashworthy aircraft seats market is estimated to witness a CAGR of over 5%, during the forecast period from 2018 to 2023.

The report for Crashworthy Aircraft Seats Market of Market Research Future comprises extensive primary research, along with the detailed analysis of qualitative as well as quantitative aspects by various industry experts and key opinion leaders; it helps the reader gain a deeper insight into the market and industry performance. The report gives a clear picture of the current market scenario, including historical and projected market size in terms of value and volume, technological advancement, macroeconomic and governing factors in the market. The report provides detailed information and strategies of the top key players in the industry. The report also contains a broad study of the different market segments and regions.