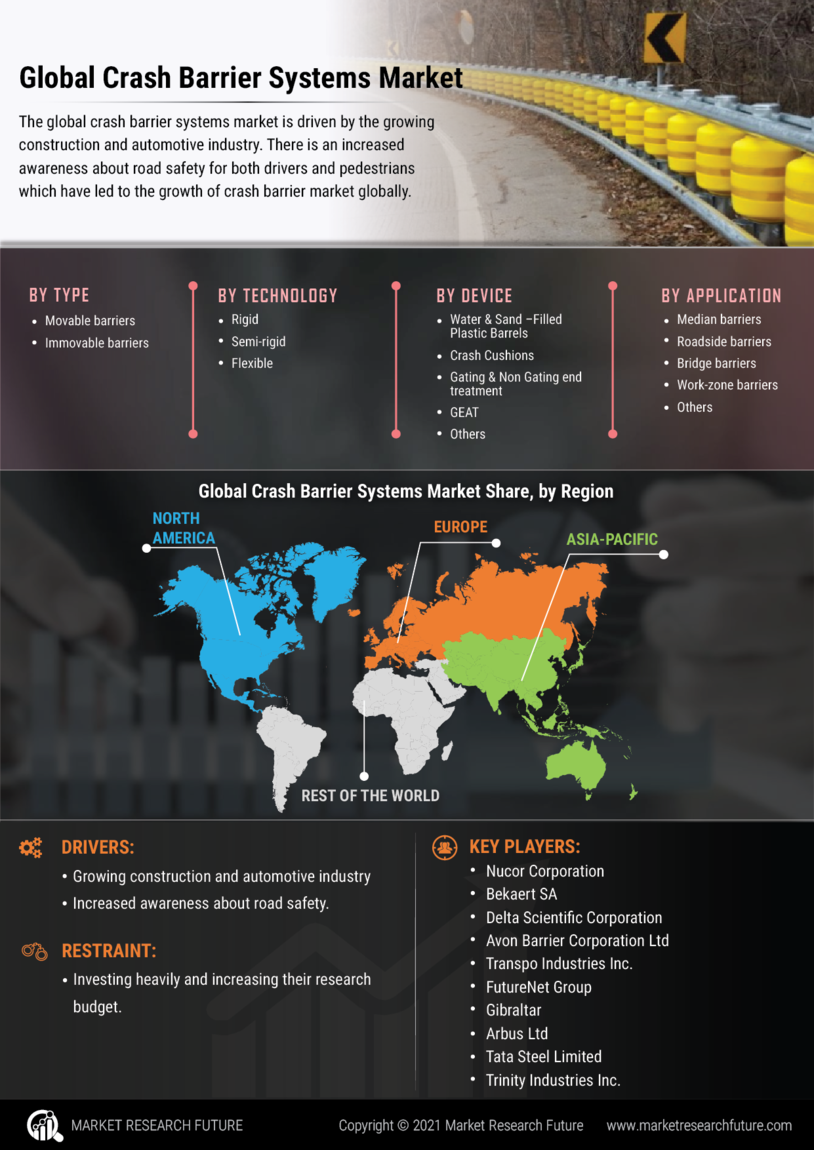 Crash Barrier Systems Market sum worth USD 9.0 billion during the forecast period of 2021-2028 With market is expected to attain this value at a global CAGR of 3.3%.

The crash barrier systems market is likely to be driven by the growing construction and automotive industry as suggested by the business chiefs and industry experts. The prominent driving factor for Crash barrier systems market during the ongoing forecast period that will be ending in 2028 is its growing construction and automotive industries across the world and especially in the participating regions for the target audience that is situated in various locations in the market premises.

The sudden outbreak of the novel coronavirus had the functioning of the crash barrier systems market under its aura of impact, as well. The global Crash barrier systems market includes major and trusted Tier I and II suppliers like Tata steel Europe (UK), NV Bekaert S.A. (Belgium), Valmont Industries, Inc. (UK), and others like Trinity Industries Inc (US), followed by Nucor Corporation (US). these are profound names that are holding a major market momentum and target customers that are located in a series of locations in the global market premises. These market suppliers have put forward their manufacturing facilities and spread them across various countries across various regions like Asia Pacific, Europe, North America, and the rest of the World. The outbreak of the COVID-19 pandemic has impacted their businesses as well. Further, restrictions such as the lockdown and others like the cross-barrier movements and others are worsening the situation.

These competitive market players have announced the suspension of production due to the lowered demand, followed by the supply chain bottlenecks, and also, to protect the safety of their employees in regions like the US, France, Germany, Italy, and others like Spain during the outbreak of the COVID-19 pandemic. As a result, the demand for crash barrier systems is expected to decline at the beginning of the forecast period in 2021. The global market manufacturers are likely to come forward and adjust to the production processes to prevent bottlenecks and plan production according to demand from tier 1 manufacturers. Also, the rising investments and funds for the research and development works are likely to help the market foster good market growth and meet the needs of the audience during the period that will be ending in 2028.

The crash barrier systems market size has been witnessed during the forecast period that will be ending in 2028 and giving birth to the global market competition because of the efforts that have been poured in by the prominent market players. The competition is also a result of the understated market players:

The crash barrier systems market will grow because of the performance of the construction and automotive industries. The rising per capita income of the middle-class population is resulting which is resulting in an increase in the number of vehicles and hence, resulting in new roads. Also, the movement of rural populations to urban areas in developing countries like the APAC region has increased, due to which, the demand in the construction sector is rising, especially during the ongoing forecast period of 2021-2028.

The APAC is projected to see the highest number of new constructions and infrastructural activities. The rising investment in technology is resulting in developments and expansions is likely to benefit the crash barrier systems industry during the ongoing forecast period that will be ending in 2028.

Based on the Technology

The crash barrier systems market has been segmented based on technology and includes Rigid (such as pre-cast and concrete barriers), Semi-rigid (such as box beam barriers), and others like flexible (such as chain and cable barriers).

Based on the Device

The crash barrier systems market has been segmented as Median barriers, Roadside barriers, Work-zone barriers, Bridge barriers, and others like pedestrian footpaths and hilly terrain barriers.

Based on the Region, the global market has been segmented as North America, Europe, APAC, and the rest of the World.

What is the expected CAGR for the market during the period that ends in 2028?

The market is likely to attain a global CAGR of 3.3%.

Who are the prominent key players in the Crash Barrier Systems market report?

What are the devices discussed in the Crash Barrier Systems market report?

The APAC region would enjoy market control and would increase the growth margin.

What are the types included in the Crash Barrier Systems market report?

The types are movable and immovable barriers.