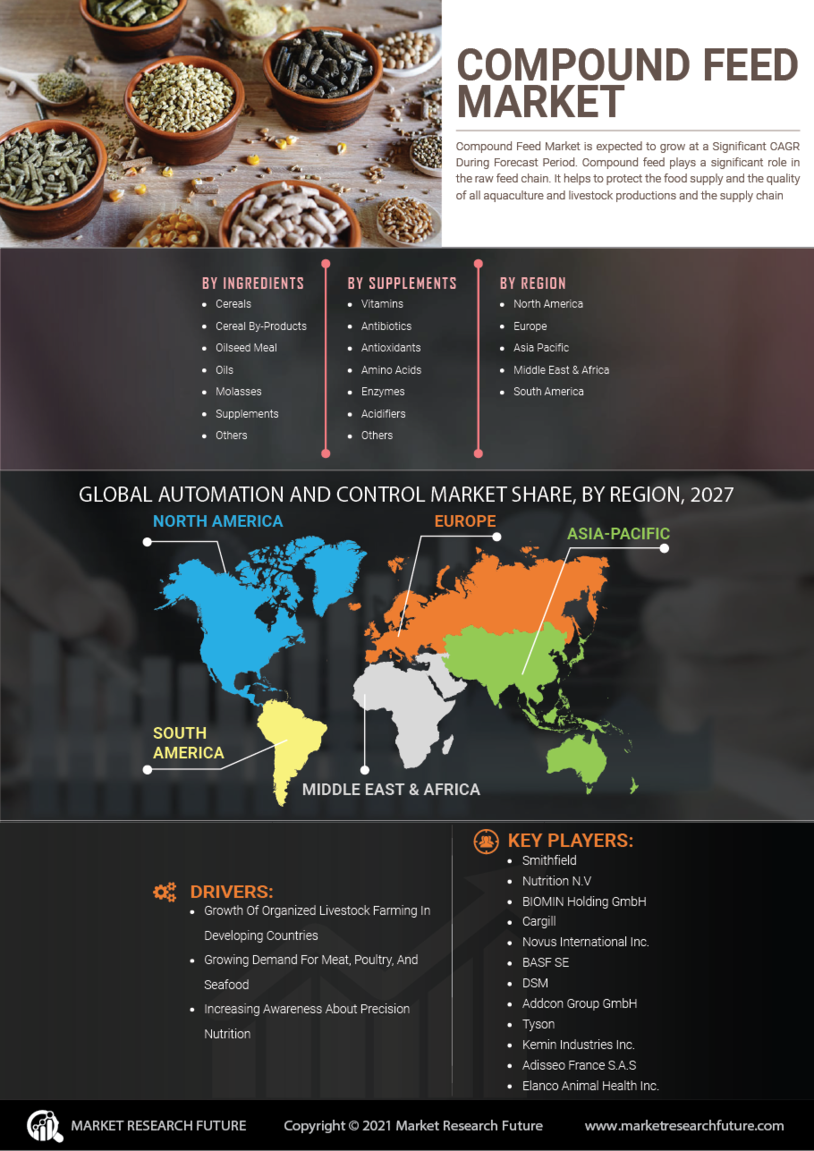 Compound feed market size is expected to be worth USD 709.65 billion, growing at a 4.85% CAGR during forecast period 2022-2030. Feed produced by mixing various raw materials and additives is called compound feed. The mixtures are manufactured or produced according to the intended animal and are available in the form of pellets, a type of food. Corn,oats, soy are the main ingredients used in the preparation of compounds for animals.

Compound feed plays a significant role in the raw feed chain. It helps to protect the food supply and the quality of all aquaculture and livestock productions and the supply chain. This food is produced to provide adequate nutrients to domestic livestock and animals, and to improve their health. There are several advantages in relation to the use of compound foods, which include increased cost-effective nutrition, nutritious quality of foods and high-quality meat products . In addition, it improves the quality of the food, which brings several benefits to the animal health.

The compound feed market was estimated at $ 458.1 billion in 2020 and is expected to grow by 4.1% growth rate over the forecast period. The increase in demand for compound feed worldwide is severely hampered by the COVID-19 pandemic, which has resulted in the disruption of the supply chain, thus limiting trade in the product. Therefore, it is expected that this will last even longer if the restriction on logistics movement is extended until the third quarter of 2021.

Asia-Pacific represents an important part of the market due to the large sector of livestock in the region. This is driven by the growing demand for aquaculture and meat products, which is the main driving force behind the growth of the compound feed market. Increased awareness of the quality of milk, meatand other dairy products have increased livestock production are two of the other factors that increase the growth of the studied market.

Daily are one of the largest demanded of the compound feed for animals, with outstanding participation, followed by the chicken segment, due to the high demand for beef worldwide. Daily and birds are expected to grow at higher rates due to the changing dynamics of industrialization in the meat industry.

Strict government regulations are one of the main factors hindering the growth of the global composites market. In addition, quality control, especially in Asian countries, is worrying and the fluctuating prices of raw materials are factors that hinder the growth of the global market. The growing demand for compound feed in developing countries is expected to create profitable opportunities for leading suppliers and manufacturers in the global market during the forecast.

The flexibility of materials and the high cost of production are hampering the growth of the global feed market.The current trend observed in the market is to increase the demand for flexible composites, which is another factor that should further support the growth of the target market. The growing adoption of flexible feeds will present lucrative business opportunities for leading suppliers and manufacturers in the global market over the next two years.

Compound feed is a mixture of supplements and raw materials delivered to livestock, derived from industrial processing, inorganic substances,animal, vegetable, organic substances and containing or not containing additives. The compound food market is segmented according to: species of animals (chickens,ruminants,aquaculture, pigsand others), ingredients (foods, cereals and cakes), by- supplements and products (amino acids,vitamins, acidifiers, enzymes, prebiotics and probiotics, and Other) and Geography (Europe,North America, Asia Pacific,Africa and South America).

The global economic downturn has had a small impact on the global stock market, which has remained optimistic. Fish is poor incarbohydrates, fats and cholesterol. Although not very rich in protein, fish also provides essential amino acids and vitamins. The demand for seafood is growing rapidly as more people become aware of the health benefits of eating fish.The largest increase in meat consumption is expected in the South American  and Asia-Pacific regions due to changes in urbanization, diet patterns,economic and population growth. For example, according to Agriculture and Agri-Food Canada, Chinese demand for meat continues to exceed domestic supply. Population trends in global growth also support the growth of the world market for seafood and meat. The limited availability of terrestrial and water resources for feed production and the increase in life expectancy and the increasing use of these resources forethanol and food production increase the demand for feed in the global meat industry.

The main regional markets include The Asia-Pacific, North America, Africa , Europe,the Middle East, South and Central America. Emerging economies, including Asia-Pacific, South and Central America, expect positive growth due to increased consumption of dairy and meatproducts. Developed regions such as Europe have dominated the global market due to the high demand for meat products in the recent past, followed by North America. These regional markets expect a similar trend during the forecast. Europe has been responsible for the maximum revenue in the global industry due to constant development and research initiatives, along with the need for better quality animal products. Emerging economies, such as China and India, expect positive growth over the next two years and lead the regional market.Development and innovation with the aim of providing quality products is expected to increase growth in this region in the near future.

The industry is very costly and is characterized by the high cost of raw materials. Suppliers invest in development and research initiatives to produce co-products that give them a competitive advantage over other suppliers and give economic advantages to the compound feed industry. The industry is expected to witness several acquisitions and mergers in the near future, with companies taking strong steps to gain market share and supply a variety of products.

In November 2020, Cargill opened a $ 34.0 million expansion at its Animal Health and Nutrition department in Temple, Texas.

In June 2020,  InnovaFeed and Cargill signed a partnership whereby companies will develop, manufacture and sell fish proteins based on insect proteins to support the sustainable cultivation of aquaculture.

The demand for animal protein is growing in the Asia-Pacific region, especially in Thailand, China, Malaysia, India,and many more, with economic growth in the region. This increased demand for meat protein has triggered meat production in the region where the consumption of animal compounds has grown and is expected to show a healthy growth rate. In addition to improving nutritional value, compound foods are gaining importance due to their role in improving meat quality. In 2020, the Indian commercial food industry serves dairy cows at 10.0-15.0%, aquaculture at 10.0-12.0% and the poultry sector around 70.0-75.0%. Commercial feed production in India was nearly 39.0 million tonnes during the same period. Poultry feed has the largest share in the country’s feed production, with nearly 24.9 million tonnes in 2020,pigs with 0, 07 million tons, aquaculture with 2.3 million tonnes anddaily with 11.6 million tonnes. As the country has a minimum share of the pig population in the general Asia-Pacific market, the outbreak of African swine fever has not affected the country’s food industry. According to statistical data from the Agriculture and Food Organization, in 2020, the country held only 1.8% of the Asia-Pacific pork population. Encouraged by the goal of improving self-sufficiency, the region is moving to the inclusion of alternative fodder ingredients, such as rice for fodder production.

The global compound market is consolidating, with major players, with a significant market share. Land O Lakes Purina, Charoen Pokphand Feeds and Cargill Inc., are the leading players in the market. Major companies have focused on acquiring small manufactures and feed mills to expand trade in overseas and local markets. Some players have expanded their geographical presence by merging with manufacturers or acquiring new ventures in the overseas market. Leading companies have focused on expanding trade in all regions and creating a new plant to increaseproduct line, as well as production capacity. The companies are also increasing the production capacity of their existing factories.

At what CAGR is the compound feed market projected to grow during the forecast period?

What will be the value of the compound feed market during the forecast period?

Which companies would impact the compound feed market the most?

Which ingredients segment will dominate the compound feed market?

What are the key factors driving the compound feed market growth?

Increase in organized livestock farming and increasing consumption of meat are the key factors driving the compound feed market growth.

Which region is projected to lead the compound feed market?

Asia-Pacific is projected to lead the compound feed market.