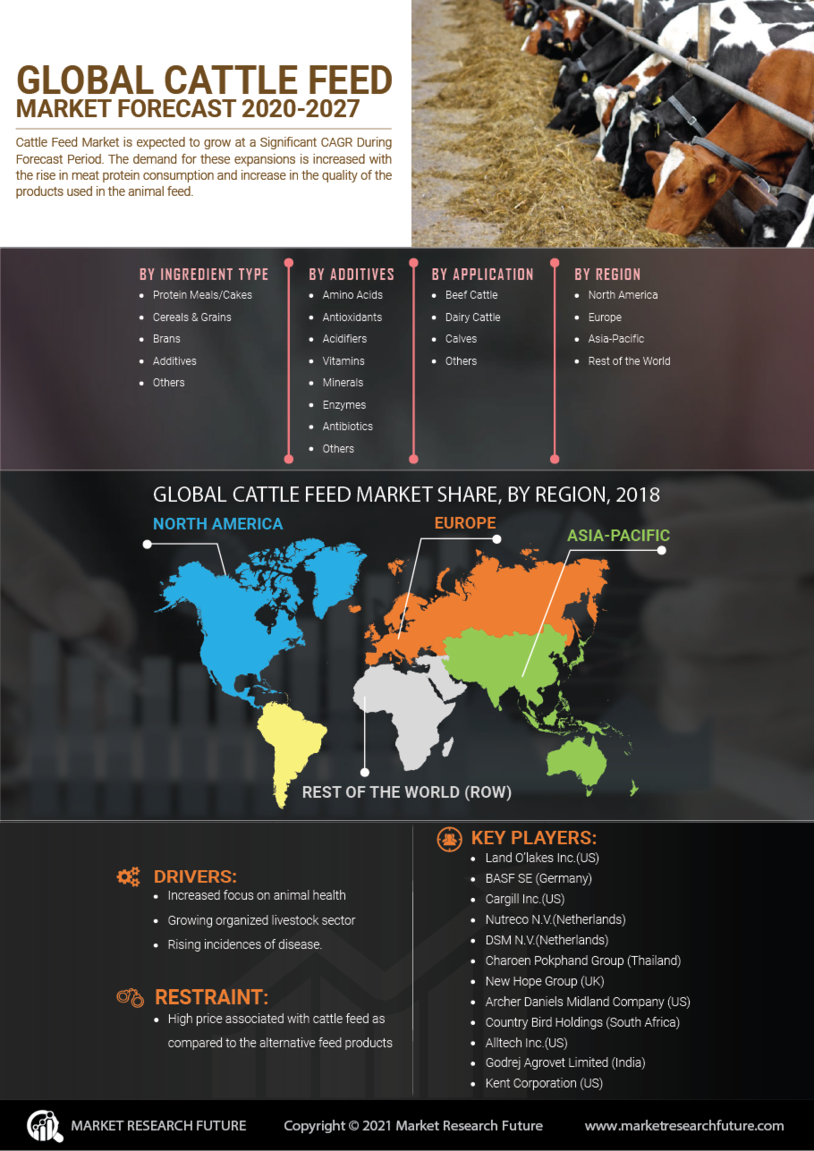 The global Cattle Feed market is projected to register a CAGR of 3.92% and reach a value of USD 103,888.1 million by 2030. Commercially compound feed manufacturers produce cattle feed, which is either fed directly or is mixed with concentrates or roughages. Some of these are required in small quantities but play an important role in the growth and performance enhancement of the animals. Cattle Feed is rich in proteins, carbohydrates, fibers, enzymes, minerals, acidifiers, antibiotics, and antioxidants, which allows it to enriched animal products, such as milk, and meat, as well as providing energy to sustain life processes.

The global pandemic, COVID-19, has created a crisis world over. Impacting over 195 countries, the pandemic has already created an economic backdrop worldwide and is likely to create a chaotic environment, resulting in the advent of a global recession. The COVID-19 outbreak has completely turned the lives of people across the globe, with the number of cases rising rapidly every day. The COVID-19 impact across industries is different. Amid the constant fear and panic of the pandemic, consumers are highly concerned about keeping a check on their health. In the current scenario, though the vaccination rate is steadily increasing across the world, it has become important to boost immunity to fight coronavirus along with maintaining hygiene and following all medical advisories that have been laid down. Even the guidelines provided by WHO (World Health Organization) in their COVID-19 analysis suggest the world population to consume immunity-boosting foods. Even in the nutrition advice of the WHO for adults during the COVID-19 outbreak, they mention that the intake of vitamins, minerals, dietary fiber, proteins, and antioxidants is essential for the human body to fight this pandemic.

The Global Cattle Feed Market is expected to grow at a CAGR of 3.92% during the forecast period 2022-2030. Cattle feed is produced either directly or by mixing with concentrators or roughages by the compound feed manufacturers. This is one type of food given to domestic animals especially those in livestock. Rising focus on animal health, growing incidences of disease outbreaks, and an increase in the organized livestock sector among cattle are the major factors that drive the cattle feed market. Rising demand for milk and dairy products in developing countries may accelerate the growth of the cattle feed global market. However, the rising cost of raw materials is restraining the cattle feed market growth.


Rising health consciousness has led to the preference for organic food products, which also include organic meat. There has been an increased inclination of consumers for organic products that are produced without any synthetic substances. Consumers progressively value resource-friendly and ethically sourced food. Citizens worldwide are increasingly becoming sensitive to sustainability issues, which, in turn, has demanded accountable actions from the corporate world about sustainable food production. It has been observed that the demand for organic products has been tremendous in most developed countries worldwide in the past few years. According to MRFR analysis, the global organic products market was valued at USD 104.6 billion in 2018, registering a CAGR of approximately 7.5% from 2008 to 2018.

Organic meat comprises only a few percentages of total meat consumption however, the rising demand for organic meat owing to the changing consumer preference has attracted the manufacturers. Consumers are also ready to pay a higher premium for natural and organic meat. This premium is about 30% for natural meat and anything between 15% and 200% for organic meat.

To combat the increasing demand for organic meat, US organic meat processors are importing organic meat from other regions such as Australia, Canada, and Latin America. Numerous companies are venturing into the organic meat sector to tap this opportunity. Conventional meat producers are either buying the already existing smaller organic meat players or starting their own organic meat divisions. For instance, in June 2018, Tyson Foods, Inc., acquired Tecumseh Poultry LLC, manufacturer of air-chilled Smart Chicken, a leading brand of organic chicken.

Along with North America and Europe, the adoption of organic food products is increasing in Asia-Pacific and the Middle East & Africa. Consumers in these regions are becoming aware of the benefits of organic and natural meat, which creates an opportunity for players in the global feed phytogenic market. Several application industries are focusing on launching organic and natural meat products to cater to changing consumer preferences. For instance, in October 2018, Foster Farms launched a new on-the-go chicken snack in five different flavors, namely, Cajun, Chile Verde, Korean BBQ, Caribbean Jerk, and Parmesan Garlic. Thus, a continuous increase in product lines of food manufacturers in favor of organic and natural meat is likely to propel the cattle feed market growth.


Governments have a huge impact on cattle feed safety for which various regulatory bodies are formed. For instance, EU Regulation 767/2009 fixes rules and regulations related to placing cattle feed in market and use of animal feed in European Union. In the US, the Animal Feed Safety System (AFSS) regulates and tests the manufacturing of cattle feed. Stringent regulations followed by major animal feed producing countries affect the growth of feed market as they go through thorough testing. Additionally, the use of antibiotics in animal feed is banned as they affect human health after consumption of animal products. Introduction of new feed and feed additives in the market becomes difficult, since it must be approved by the government authorities involved. Hence, the entry of new players in this market stands a low chance. Thus, various regulations by regulatory bodies affect the cattle feed market and act as a restraint for the growth of the market.


Natural feed additives such as feed phytogenic promote the growth, health, indigestion, absorption, and assimilation of nutrients. They also affect physiological processes such as reproduction, immune function, and stress resistance. These plant-derived compounds are incorporated in animal feed to improve livestock productivity through the amelioration of feed properties and promotion of the animal’s production performance. Moreover, feed phytogenic also gives a specific flavor or scent to the feed as they contain a cocktail of numerous active principles. Feed phytogenic are known for their flavoring properties, thus having an impact on the palatability of diets. They exert a range of distinct biological properties, therefore having the potential to affect gut health and increase performance positively. The plant-derived compounds have been gaining close attention from livestock feeders because of the ban on antibiotics in many countries. Apart from that, the wide availability of products from different manufacturers is expected to drive the demand for cattle feed in the global market. The increasing demand for plant-derived or natural feed additives and their wide advantages on livestock health and growth are altogether propelling the demand for the cattle feed market.


Growing demand for meat, and dairy as a part of a diverse diet has raised the need to produce them in the most sustainable way possible. Cattle feed is a vital input for the food industry and has a significant implication on environmental health and food security. Resources such as land, water, and energy are used to rear animals. Increasing the livestock population plays a very crucial role and is identified to exert pressure on the environment. The livestock sector is responsible for the emission of about 15% of the global greenhouse gas (Food and Agriculture Organization) and utilizes 70% of the agricultural land. Looking at the current scenario and trends, a large amount of feed would be required to suffice the growing demand for livestock production in Malaysia. However, more production of feed is directly related to emission or increased percentage of greenhouse gases. Thus, this is a major challenge faced by the feed additive industry to foster sustainable food security. A highly efficient livestock farming practice is required to get a solution to this problem.

Based on ingredient type, the global Cattle Feed market has been segmented into protein meals/cakes, cereals & grains, brans, additives, and others. The cereals & grains segment accounted for the largest market share of 29.69% in 2021. However, the brans segment is likely to register a higher CAGR of 4.50% during the forecast period.

Based on application, the global Cattle Feed market has been segmented into beef cattle, dairy cattle, and calves. The dairy cattle segment accounted for a larger market share of 57.15% in 2021 and is likely to register a CAGR of 3.97% during the forecast period.

By region, the global Cattle Feed market has been divided into North America, Europe, Asia-Pacific, and the Rest of the World. North America accounted for the largest market share of 32.20% in 2021, the market is expected to register the highest CAGR of 3.75% during the forecast period. Asia-Pacific was the second-largest market with a share of 28.27% in 2020, and the market is projected to exhibit the highest CAGR of 4.22%.

North America is accounting for 32.20% of the market proportion in the year of 2021 and it is projected to expand at a high CAGR of 3.75% the forecast period of 2022-2030. The North American market consists of the US, Canada, and Mexico; it is projected to hold a significant share of the global cattle feed market during the review period. North America is an attractive market for manufacturers of cattle feed. The significant amount of meat consumption in the region and increasing awareness regarding the origin of consumed products is expected to supplement the growth of the cattle feed market. In addition, the region has witnessed a considerable surge in the number of millennials, who are forefront consumers of new food & meat products. Therefore, the rise in the millennial population is anticipated to offer remunerative cattle feed market opportunities. The market for cattle feed in the region is characterized by the presence of large multinational corporations such as Cargill Inc., Land O' Lakes, and ADM, among others, who have a strong presence across the United States and Canada.

Asia-Pacific is also accounting for significant market share in the global Cattle Feed market in the year of 2020 and is expected to grow at a CAGR of 4.22% during the forecast period 2022-2030. Asian countries have witnessed a higher rate of traction for dairy products, owing to its increased demand from vegan consumers. The continuous growth of India and Japan in the cattle feed market will reflect the overall growth of this region in the cattle feed market. High consumption of pork in countries such as China and Japan drive the production of swine feed in this region. Moreover, owing to the increasing trend of pet adoption among the population, the production of pet food is increasing in this region which is contributing to the growth of the Asia-Pacific cattle feed market.

Few developments that occurred in recent times influencing the market growth of Cattle Feed are listed below:

What is the valuation of the cattle feed market?

who are the leading players in the market?

North America is expected to dominate the global cattle feed market over the forecast period.

The growing cattle industry is the major driver for the cattle feed market.

The global cattle feed market is projected to record a CAGR of 3.92% during the forecast period d...