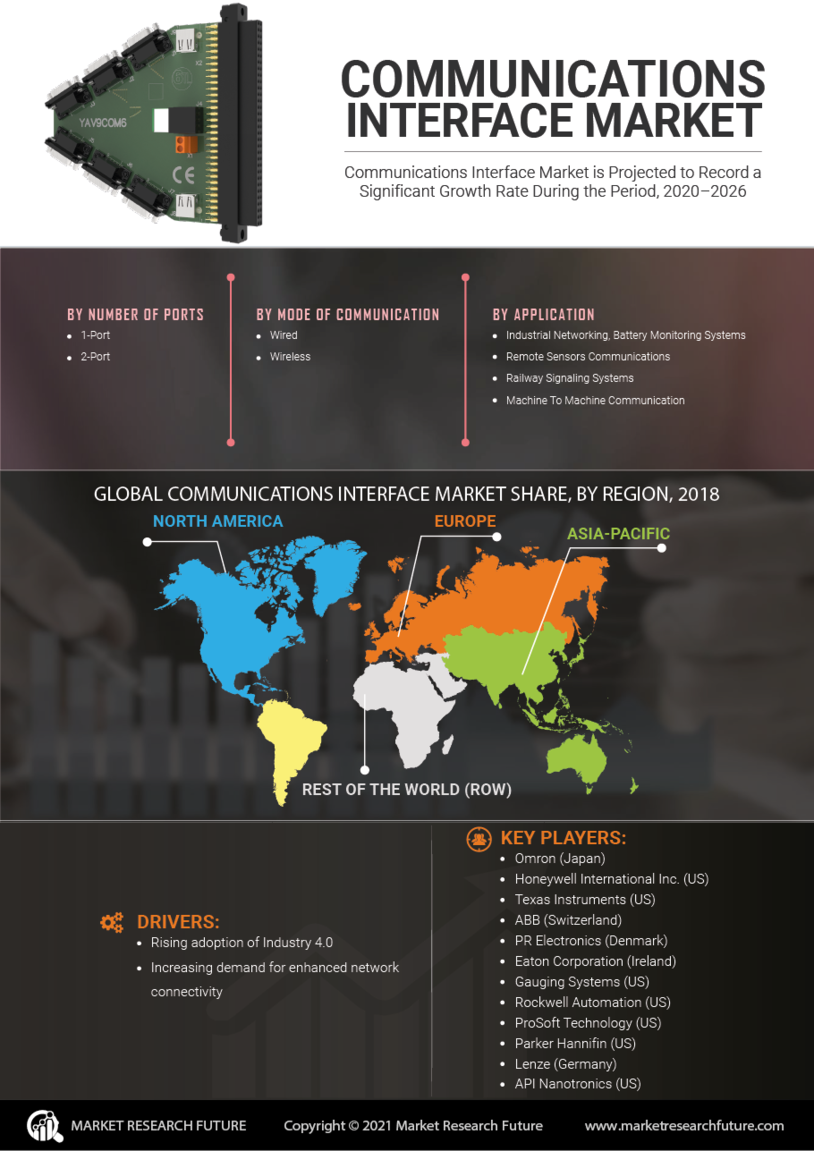 However, a lack of proper network infrastructure in developing countries is expected to hamper the market growth during the forecast period. The market seeks opportunities from the advent of advanced and intelligent networking devices and the rising adoption of M2M and IoT communication technologies across various industry verticals.

Global Communications Interface Market has been segmented based on Component, Number of Ports, Mode of Communication, Application, and Region.

By component, the market has been segmented into hardware modules and services. The services segment has been bifurcated into implementation and support and training.

By number of ports, the market has been segmented into 1-Port and 2-Port.

By application, the market has been segmented into industrial networking, battery monitoring systems, remote sensors communications, railway signaling systems, machine to machine communication, and others.

By region, the market has been segmented into North America, Europe, Asia-Pacific, the Middle East & Africa, and South America.

Market Research Future (MRFR) has covered the following countries in the regional analysis of the communications interface market: the US, Canada, and Mexico in North America; Germany, the UK, France, and Italy in Europe; China, Japan, India, and South Korea in Asia-Pacific. Saudi Arabia, UAE, and South Africa in the Middle East & Africa; and Brazil, Argentina, and Colombia in South America.

North America currently dominates the global communications interface market. It holds a significant market share owing to the presence of the majority of key players in the market who are investing heavily in the research and development activities to develop advanced networking hardware solutions and offer seamless connectivity. Furthermore, the region is also an early adopter of technology and has been investing heavily in research and development for the advancement of wireless technologies by countries such as the US and Canada in this region.

Asia-Pacific is projected to record the fastest growth rate during the forecast period. Governments in the region have been increasingly supporting the digitalization initiatives, which is expected to drive demand in the region. Furthermore, the region exhibits a growing demand for connected devices and the adoption of smart and intelligent technologies such as IoT and M2M communications, which is further expected to propel the demand for communications interfaces in the region. Europe is also expected to gain a considerable share in the market whereas, the Middle East & Africa and South America regions are witnessing steady growth.

Name players making a move in the communication interface market?

Which region has the upper hand in the communication interface market?

Which region would outpace others in the communication interface market?

Asia Pacific would record higher CAGR than others in the communication interface market.

How many ports have been discussed in the communication interface market?

1-port and 2-port are two ports discussed in the communication interface market.

What are the components discussed in the communication interface market?

Two components, hardware module and service, have been discussed in the communication interface market.

Communications Interface Market Is Projected To Record A Significant Growth Rate During The Perio...