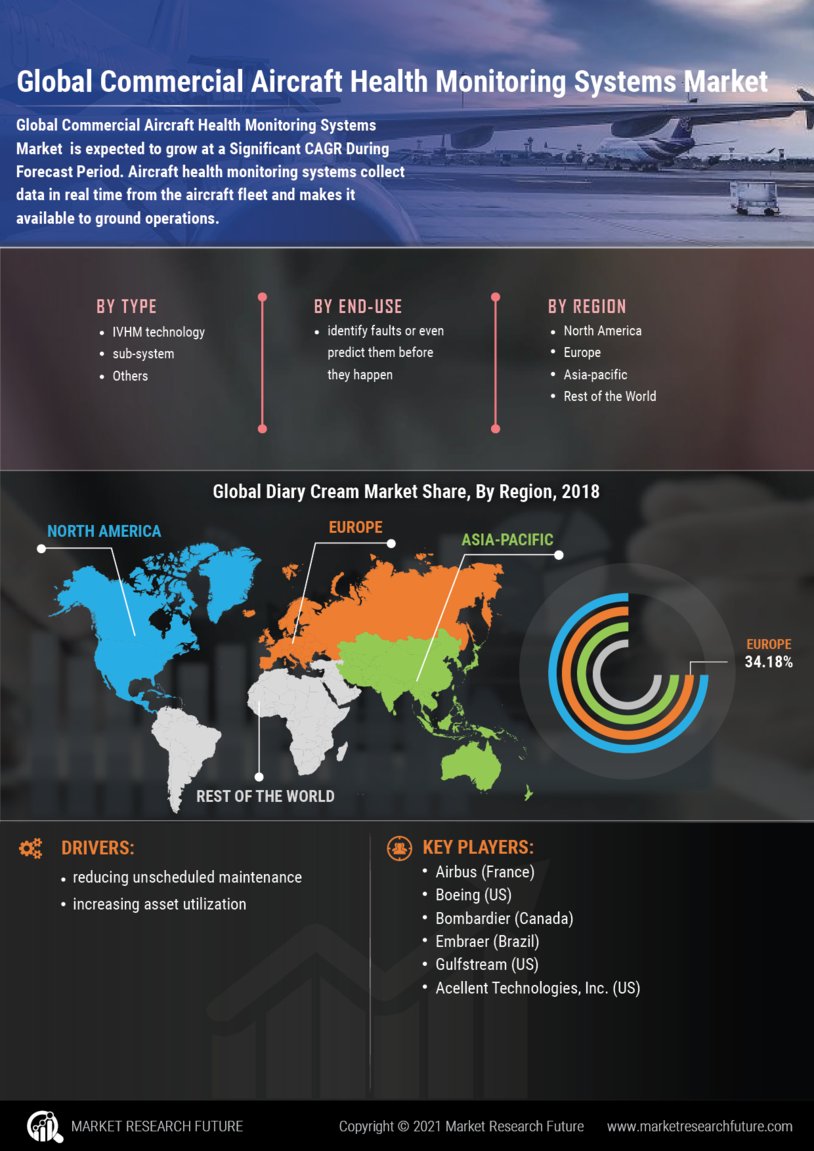 Aircraft health monitoring systems collect data in real time from the aircraft fleet and makes it available to ground operations. Various sensors are installed at various damage hotspot locations throughout the aircraft structure/engine, which provide early detection of anomaly (or initiation of crack/fatigue). Thus, necessary preventive measures can be implemented on-time, which reduces the chances of critical damage and major system failure.  However, the reliability and durability of damage detection techniques/ sensors acts as a barrier for the growth of global commercial aircraft health monitoring systems market. The aircraft operators sometime incur high operational cost for aircraft maintenance.

The global commercial aircraft health monitoring systems market is expected to grow at a CAGR of around 6% during 2016-2021. The key factors driving the growth are the advantages of structural health monitoring, need for aircraft real-time damage detection, growing trend towards more electric aircraft, rising demand for automation, growth in situational awareness to drive operations, reducing unscheduled maintenance & increasing asset utilization, and cost-effective maintenance. Development of fiber optics sensor for real time data analysis and R&D spending on health monitoring systems are the emerging trends in the market.

North America is the leading region for the global commercial aircraft health monitoring systems market. Several major aircraft manufacturers (such as Boeing, Bombardier) and health monitoring systems system providers (such as UTC, Honeywell) are present in the region, gaining the region a high market share. Moreover, it is expected that approximately 10,000 aircraft would be in service in the region by 2035, which would create an opportunity for the major and prominent companies of the region.

Airbus (France), Boeing (US), Bombardier (Canada), Embraer (Brazil), Gulfstream (US), are some of the prominent aircraft OEMs while Acellent Technologies, Inc. (US), BeanAir (Germany), Curtiss-Wright Corporation (US), FLYHT Aerospace Solutions Ltd. (Canada), General Electric Company (US), Honeywell International Inc. (US), Meggitt PLC (UK), Rolls-Royce plc (UK), RSL Electronics Ltd. (Israel), Safran S.A. (France), and United Technologies Corporation (US) are some of the prominent solution providers profiled in MRFR Analysis and are at the forefront of competition in the global commercial aircraft health monitoring systems market. The report on the global commercial aircraft health monitoring systems market by Market Research Future covers extensive primary research. This is accompanied by a detailed analysis of the qualitative and quantitative aspects by various industry experts and key opinion leaders to gain deeper insights into the market and industry performance. The report offers a clear picture of the current market scenario, which includes the historical and forecast market size, in terms of value, and the technological, macroeconomic, and governing factors of the market. The report also provides comprehensive information about the strategies of the top companies in the industry, along with a broad study of the different market segments and regions.

What are the key IVHM technologies in the Commercial Aircraft Health Monitoring Systems Market?

What growth rate is the Commercial Aircraft Health Monitoring Systems Market touted to acquire in the coming years?

The Commercial Aircraft Health Monitoring Systems Market is touted to acquire a growth rate of around 6% in the coming years.

What are some of the top Commercial Aircraft Health Monitoring Systems Market size enhancers?

Which IVHM technology is the leading segment in the Commercial Aircraft Health Monitoring Systems Market?

The prognostic systems segment has remained in the lead since 2020.

In 2020, the fixed wing segment accounted for the largest market share.

Which region is the top performer in the global Commercial Aircraft Health Monitoring Systems Market?