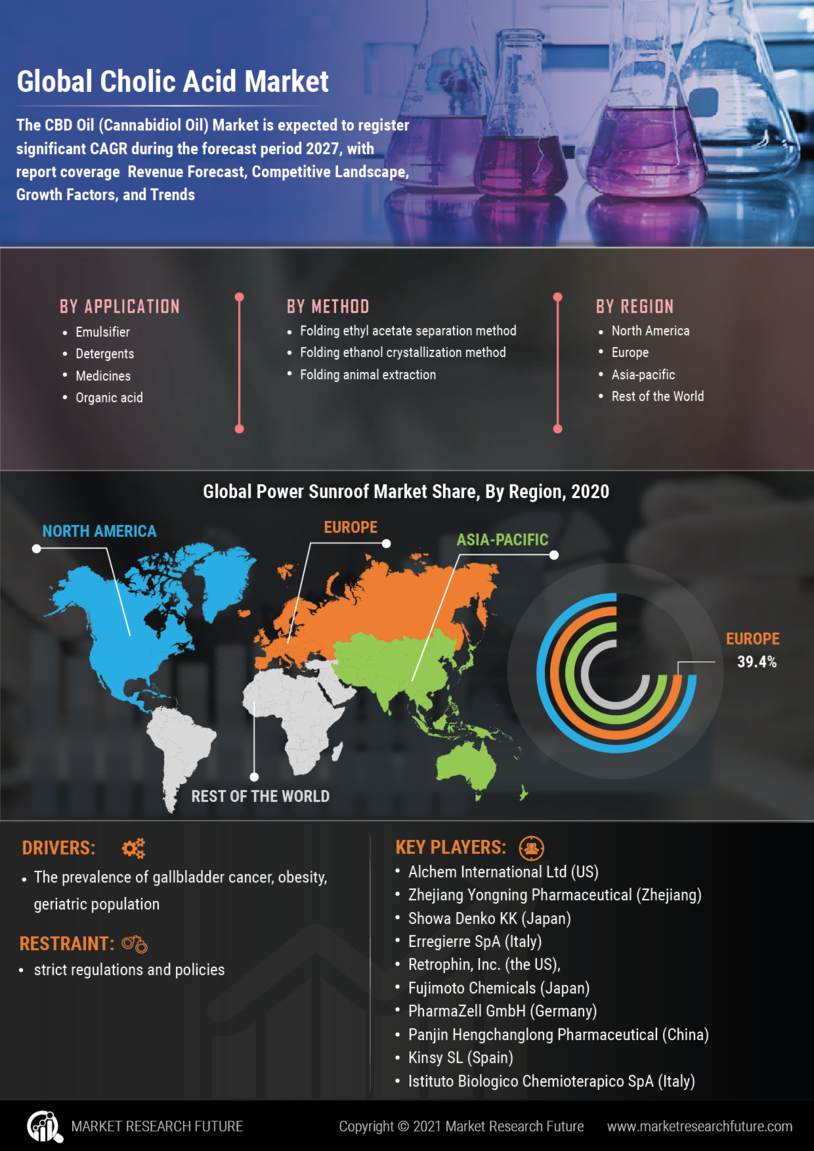 Cholic Acid Market is expected to reach USD 815.5 million at CAGR of 11.23% during the forecast

With an expectation of touching a CAGR of 7.90%, the cholic acid market expects to reach a value of USD 92,412.51 thousand by the year 2024. Cholic acid structure made by the liver using cholesterol is termed cholic acid. The primary role of Cholic acid is to ensure that fat is broken down into smaller particles and subsequently bring about perfect digestion in the human body. Cholic acid is used in the production of ursodeoxycholic acid, a pharmaceutical agent used in the treatment of conditions like gall bladder stones and other liver diseases. With the use of cholic acid function in treating chronic diseases, it is indeed going to register a very high value in the global economy.

Significant factors influencing the market's growth include increased obesity, gallbladder cancer, increased geriatric population, and many more. On the other hand, strict regulations and policies tend to pull back the market growth significantly.

Life has taken a sharp turn with the onset of this deadly pandemic. Physical, mental, and financial disturbances are being observed in every sector. The business has been affected a lot too. With worldwide lockdown and the fear of Covid set in, the companies have been shut down for quite a lot. All this is not over yet but what needs to be understood is that everyone should learn to live with it. If nothing can be done with the virus, we can at least change the working pattern and style to ensure we are on the right track. The reports that have been prepared are accurate and to the point description of what the companies should do to combat the losses and take care of the future perspective. Apart from the qualitative and quantitative aspects, the current cholic acid market analysis is also included in the reports.

One of the significant factors behind the growth of the Cholic acid market is the increase in the cases of gallbladder cancer. And according to the studies, gallstones are the reason behind the development of the market. This study revealed that almost 2,20,00 new cases of people suffering from gallbladder cancer were diagnosed worldwide in the year 2018. This high rate of gall cancer cases can be correlated with gallstones too. Therefore, the growing rate of gallbladder cancer has ultimately led to an increase in the usage of colic acid. The entire scenario has made the market grow at a favorable rate. The market is expected to grow at a similar place due to changing lifestyles, obesity, and similar factors leading to liver diseases and gall bladder conditions.

Few factors affect the cholic acid market analysis, but the one that has been affecting the most is the regulations and laws laid down by various regulatory bodies, governments, and local bodies for the wise usage of cholic acid. These are indeed strict and stringent and holds back the market from growing further. The regulations are implemented because of the use on the human body. Though they have been found very useful in treating liver and gallbladder conditions, there are still some contraindications that negatively affect the human body. The regulatory bodies need to make sure that colic acid is done in an appropriate manner and that it does not cause any harm to any human being or even the environment. No doubt the regulations are structured, but there is a fire need for such stringent rules to make cholic acid function be implemented in a wiser way.

The market can be divided based on two factors. They are:

Based on method: Based on the technique, the market can further be classified into the following subcategories:

Based on these two broad classifications of the market, each of them has a unique market value. Based on the application, the Medicines segment holds a significant part in the cholic acid market. With its widespread use in various kidney diseases, it has gained popularity across the world.

Based on the regions, the cholic acid market has the following subtypes:

Europe holds the most significant share in the market with a value of almost 39.5% of the total stake.  The dominance of the region in the market is primarily due to substantial manufacturers in the area.

The Asia Pacific also holds a significant share of the ursodeoxycholic acid market. This is because of the increase in ten obese populations the countries like India and China. Obesity comes with an increased risk of gall stems and, after that, gallbladder cancer.

The cholic acid market expects to attend a CAGR of 8.47% during the forecast period. The American region has two central areas that include North America and Latin America. Increased gall bladder stones are likely to be a significant factor in the increased growth of the market.

The Middle East and Africa have the most negligible share in the cholic acid market but expect a steady increase due to the increased geriatric population in the region.

All these significant players in the market have been working in a strategic and a planned manner. Various collaborations, acquisitions, and mergers amongst themselves have taken the call to the heights of success. They have also been leading the market as idols for the new entrants. It is not just for the growth of themself but also for the development of the market as a whole.

Here are few recent advancements made in the cholic acid market:

The report provided includes all the significant and small aspects required by an organization to do well and even combat losses during the Covid times. Starting from the overview of the cholic acid market to analysis based on the Covid impact, it also includes the market dynamics of the cholic acid market. The market segmentation based on method type and application is also included in the report. The market analysis based on five different regions is also provided with the report. The report's lap gives the details about the major players in the market and various strategies they have been following for the market's growth. The latest developments in the market are also provided to move forward with the newest technology. The current market scenario and the ways that can be implemented to bring about growth are shared in a detailed manner—all the reports are prepared by analysts with expertise in the field and the industry experts.

cholic acid market CAGR would be 7.9% during the forecast period.

What is the projected valuation of the market?`

What are the restraints of the market?

The prevalence of gallbladder cancer, obesity, geriatric population, and regulatory policies can hold back the market.

Which region would lead the market?

Europe would lead the market with a 39.5% market share.

Which region would be the fastest-growing in the global market?

The Americas would be the fastest-growing region in the global market.

Cholic Acid Market is High Prevalence of Gallbladder Cancer is Expected to Boost the Growth Near ...