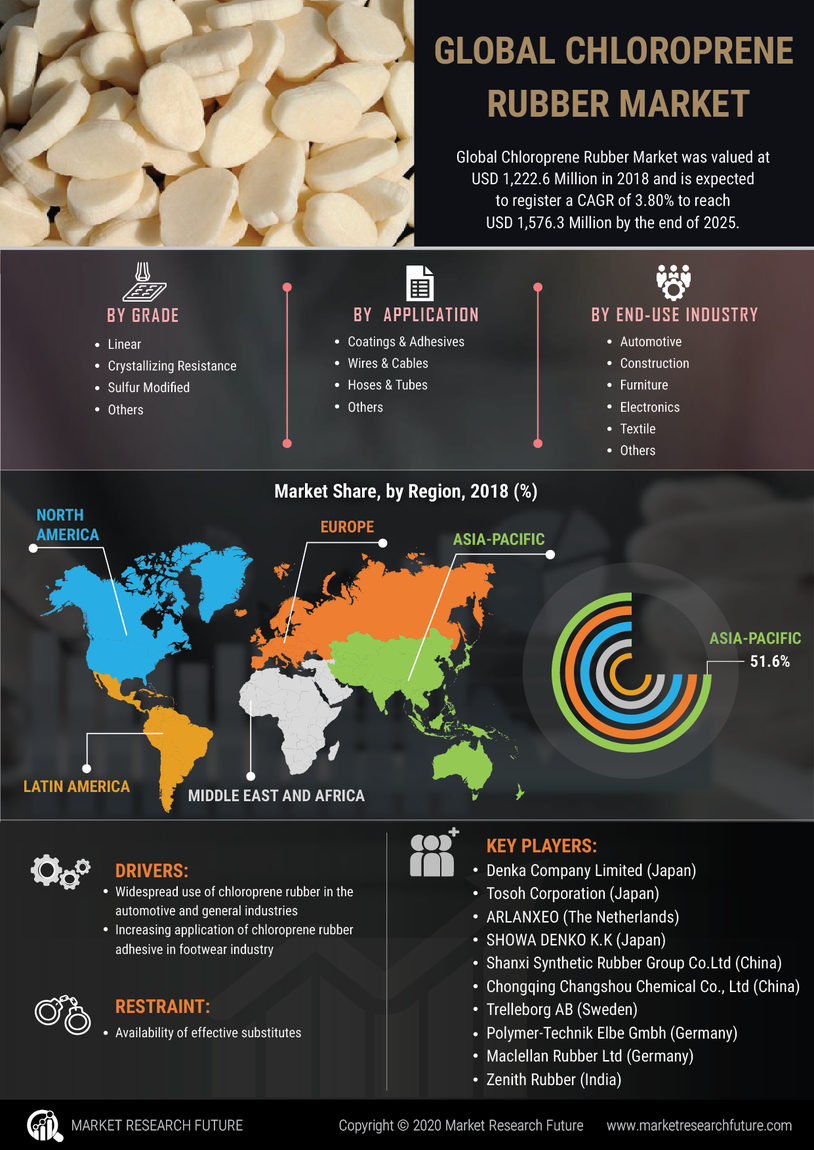 Chloroprene is a monomer that is a colorless fluid and is used to produce a polymer polychloroprene. Chloroprene Rubber is a synthetic or an artificial polymer that acts as Elastomer or can be called a synthetic rubber. The Elastomers have significantly greater elastic deformation. The primary properties of the Chloroprene Rubber are high flexibility, heat resistance, perspiration, solvent resistance, weather aging, and bonds with various substrates and chemicals. Chloroprene is used in various kinds of applications such as rubber and adhesive industries. The utilization of this product is playing a central role in the enhancement of the global economy and the major application sectors for the market growth are medical industries, consumer goods, automotive, and manufacturing.

COVID-19 Analysis:
During the global covid-19 outbreak, the demand and supply chain market was almost shut down and the import-export market came to a halt. The detailed analysis shows the restricted growth in 2020. In 2020, there was an inclination of around 13-32% in the global trade volumes. This led to a forced recession in the manufacturing and production market. The value and the prices of the market have been dropped during the pandemic. The main restraints were that the consumer is not active in the market and the production has been hampered and that too made it a problem at a global level and impacted the distributors and manufacturers. Several small-scale industries have emerged during pandemic times and have given a boost to the demands as well and now it is developing more amongst the local regions as well.

Market Dynamics:
Drivers
The widespread usage of chloroprene rubber in the automotive and general industries is one of the driving factors for the growth of the market. Apart from this, in the application segment, the usage of Chloroprene has been increased as the Chloroprene Rubber adhesive is majorly in the footwear industry.

Restraints
Certainly, there are some alternatives for chloroprene rubber and the manufacturers have given effective substitutes such as natural rubber, styrene-butadiene, and isoprene. The increasing consumption of elastomers with lower cost and their various applications may hinder the growth of the market.

Challenges
With the increased awareness and changed mindsets, most of the industries are approaching eco-friendly and natural materials. Also, the chloroprene rubber can neither be recycled nor be re-processed which can be a threat to the growth of the market. Moreover, this market requires capital investments and has extended paybacks. So, emerging new players might be a substantial risk factor for the future.

Value Chain Analysis
One of the most favored synthetic rubbers is Chloroprene rubber. There are many potential substitutes for its application. One of the factors for the growth in the market is acceptance and other substitutes are expected to account for substantial demand. The APAC region is responsible for the maximum growth in the Chloroprene Rubber Market. The growing application of Chloroprene Rubber is majorly in the automotive industry, followed by
Coating, binders and adhesives, belts and hoses, and others. It is widely used in motor vehicle components and such usages have projected to be the fastest-growing segment as per the forecast period. The overall boost in the growth of the Chloroprene Rubber market is held by the regions of North America and Europe. Last year, North America generated a share of 24% in the market and is expected to grow at a CAGR of 1.73% during the forecast period.

Segment Overview:
The global chloroprene rubber market is segmented based on Grade, Application, Type, End-User, and Region. The major profit to the market is based on segmentation is divided into coating and adhesives, hoses and tubes, wires and cables, and others. As per the end-user, the market is broken into construction, automotive, furniture, electronics, textile and adhesives, and others. Based on region, APAC has provided the highest revenues to the global Chloroprene Rubber Market.

By Application
Coating and Adhesives
Wires and Cables
Hoses and Tubes

The Middle East and Africa
Latin America
Brazil, Argentina & Others

Regional Analysis
The detailed overview of the report provided both qualitative and quantitative details of the global chloroprene rubber based on various segments. The market size and forecast estimates from the years 2018 to 2025 concerning five major regions are North America, Europe, Asia-Pacific, Middle East, and Africa and South America. Out of all, APAC is expected for the largest and the fastest growth in the chloroprene rubber market. This region is surging demands from china in both automobile and industrial component applications. Out of all the regions, North America and Europe are expected to witness significant growth in this sector. Afterward, the increase in the population and the developments in the urban areas will get rapid industrialization, this will increase the demand and supply chain in the APAC region and Europe. Many outcomes for the Chloroprene Rubber have shown very beneficial results, the extensive R&D has been conducted by potential key players, they replaced the smoked rubber suppression with vulcanization during the manufacturing process of chloroprene, and the properties after that are better in terms of elasticity and non-absorbing properties. This will lead to extensive growth for the participants of the region that will eventually generate revenues for the Chloroprene Rubber Market.

Competitive Landscape
The high consumption and demand for chloroprene rubber are majorly increasing in the areas of China, Japan, and the US. The rapid increase in consumption and demand has led to the emergence and rapid increase in industries in the location. Certain developing countries in the regions of APAC, Latin America, and Eastern Europe witnessed a high demand for the material in the past few years. So it is expected that most of the major players emerging in these areas will have a significant role to propel the market. The increase in automotive outputs, the economic growth, and the higher demand and manufacturing require raw material so the consumption of Chloroprene Rubber will increase so rapidly in the forecast period till 2025.

Recent Developments
● In 2018, Tosoh corporation located in Shunan City in Japan proposed a rapid increase in the synthetic rubber production capacity increasing the market shares and this made it difficult for the new players to gain a stronghold in the market.
● In the past few years, several new companies have been established and the continuous growth of the industries lead to new techniques, chemical demands, and industrial equipment growth. Domestic chloroprene rubber production increased the market competition and the production capacities.
●October 09, 2019 Arlanxeo (Netherlands), a leading global synthetic rubber company, announced investments in chloroprene rubber and nitrile butadiene rubber production plants. Synthetic elastomers manufacturer is upgrading these chloroprene rubber (CR), and nitrile butadiene rubber (NBR) plants to meet the rising demand for the polymers. Investments would be used for the modernization of the company’s CR plant in Dormagen, Germany. The move has improved the plant’s flexibility and capability for increased production operations.
●August 5, 2019 Tosoh Corporation (Japan), a global chemical & specialty materials company, revealed its plans to raise production capacity for chloroprene rubber (CR). Tosh’s CR is a part of the functional polymer product line-up of its Specialty business and marketed under the product name Skyprene.
•April 2021 - ARLANXEO, a world reputed chloroprene rubber (synthetic rubber) producer, is working on bolstering its presence in India with the introduction of ARLANXEO India Private Limited, with the operations already having started in January this year. This legal entity is expected to be a cornerstone for the company to gain the interest of its customers not only in India but other markets as well, including Nepal, Bangladesh, and Sri Lanka.
•October 2021 - Nike is ready to collaborate with Liverpool F.C., celebrating the latter’s colors by launching new football shoes. With a blend of red, white, black, and yellow, Air Huarache has a red and white checkboard along with a solid red base made of chloroprene rubber. This base also features an off white-colored overlays, coupled with white and yellow neoprene right in the middle of the shoes’ tongues.

In the report analysis for the Chloroprene Rubber Market Research, the study presents a thorough analysis of the competitive landscape where the market shares of the leading players are increased and are expected to grow at a rapid rate as per the forecast period. The units are presented for shipment of the product. The opportunities, drives, and restraints in the market development have been keenly observed. The market trends and challenges are done in the report analysis. The new technologies and the emergence of the new companies have shown the specific application growth by different end-user industries.

How is chloroprene rubber produced?

Chloroprene rubber is produced by polymerizing 2-chloro 1-3 butadiene in the presence of a catalyst, emulsifying agents, modifiers, and protective agents.

What are the advantages of chloroprene rubber over conventional rubber?

Major advantages of chloroprene rubber include a higher resistance to chemicals, oils, ozone, and heat.

What is the volume of the global chloroprene rubber market?

What is the major driver for the chloroprene rubber market?

The major driver for the global chloroprene rubber market is the growth of the automotive industry.

What are the major restraints acting on the chloroprene rubber market?

The major restraints acting on the global chloroprene rubber market include the widespread adoption of alternative rubber products such as natural rubber, styrene butadiene rubber, and isoprene.