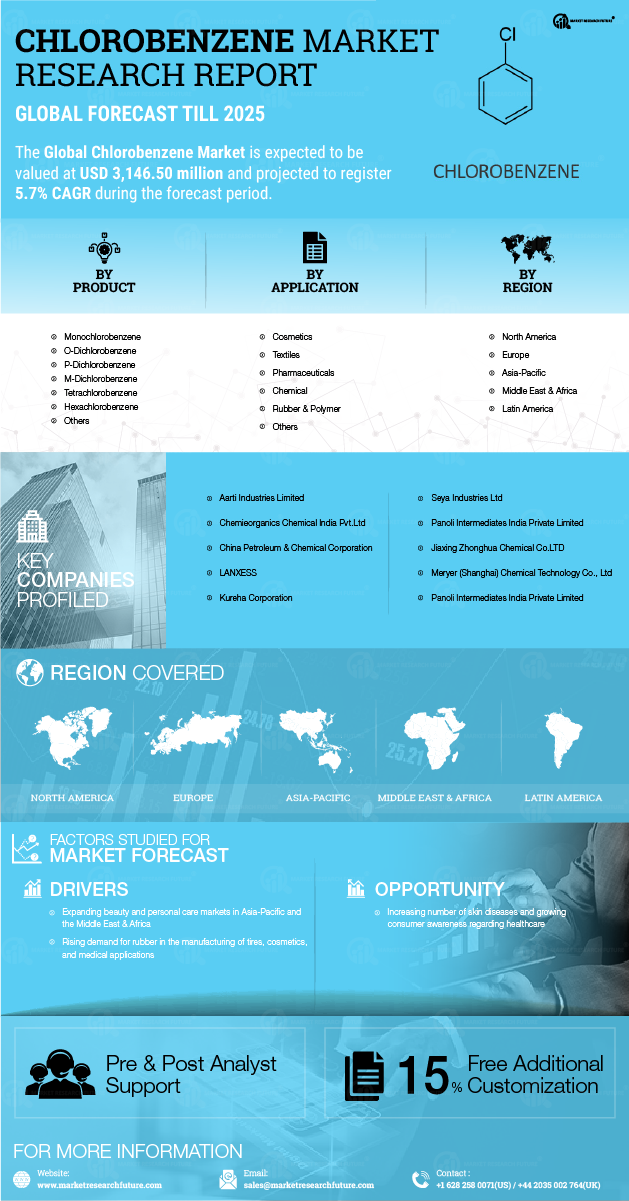 The Global Chlorobenzene Market is expected to be valued at USD 3,146.50 million and projected to register 5.7% CAGR during the forecast period. Chlorobenzene is primarily used as a chemical intermediate as well as a solvent and degreasing agent. It is an aromatic chemical compound which belongs to the family of organic halogen compounds, class of synthetic and natural chemicals that comprises of one or more halogens such as chlorine, fluorine, bromine, or iodine combined with carbon elements.

In cosmetic products, chlorobenzene dissolves with other substances and is an organic chemical which is positively influencing its application in natural-based beauty products. The growing beauty and personal care markets in Asia-Pacific and the Middle East & Africa is expected to create significant demand for natural beauty products. The ASEAN Cosmetics Association, Inc (ACA), reported that China accounted for nearly 37% of revenue generated in the Asia-Pacific cosmetics & personal care ingredients market by 2017 and is estimated to exhibit a significant CAGR of around 6.55% over the assessment period due to the various factors such as rapid urbanization, rise in per capita disposable income, and changing lifestyles.

The growing geriatric population across the globe is expected to increase the adoption of cosmetic and skincare products, which in turn is likely to raise the demand for cosmetics & personal care products across the globe. The increasing number of skin diseases and growing consumer awareness regarding healthcare is estimated to augment the demand for personal care and cosmetic ingredients. Thus, the growth of the cosmetic industry in the developing regions is estimated to offer lucrative opportunities for the producers of chlorobenzene as an organic chemical solvent. 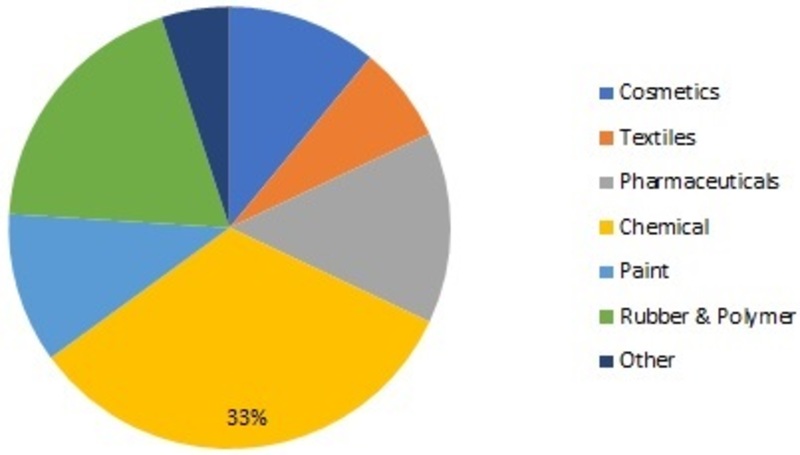 Asia-Pacific is expected to be the fastest-growing regional market owing to the high demand for cosmetics, textiles, chemical, and polymer products in countries such as China, South Korea, India, and Japan. In addition, the region is witnessing exponential growth in the manufacturing and construction industries on account of economic development, which is likely to propel the demand for chlorobenzene in various applications. The North America market is witnessing high demand for chemical-based products, which is expected to boost the demand for chlorobenzene in the region. In the US, the use of chlorobenzene as a medical intermediary in the pharmaceutical industry is growing due to the rise the prevalence of chronic diseases.

At what CAGR the chlorobenzene market is projected to grow during the forecast period?

What will be the value of the chlorobenzene market during the forecast period?

Which region is expected to command the largest share in chlorobenzene market?

The APAC region is expected to command the largest share in the chlorobenzene market.

What are the major applications of chlorobenzene?

It has wide applications in rubber and polymer, chemicals, pharmaceuticals, cosmetics, and others.

Which key factors are driving the chlorobenzene market?

Growing agricultural industry and increasing use in the automotive industry is boosting market growth.