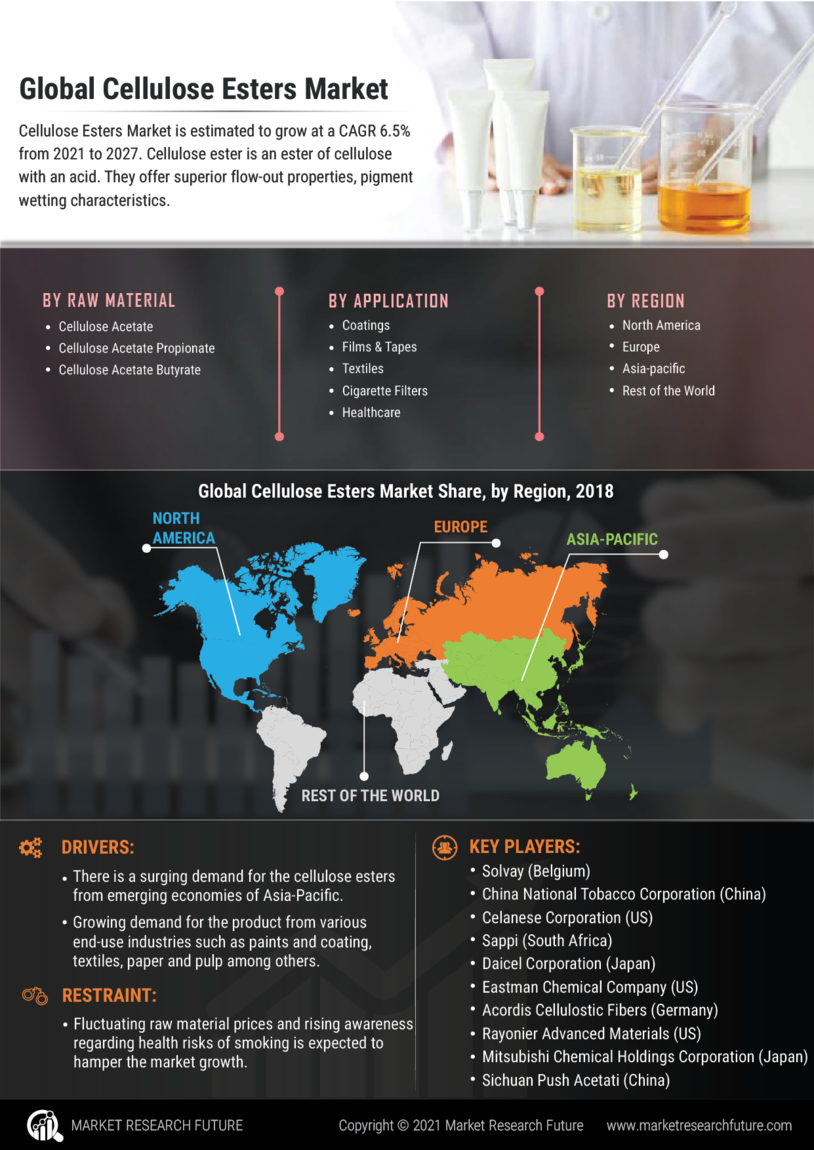 Cellulose Esters Market is projected to be worth USD 5.1 Billion by 2027, registering a CAGR of 6.5% during the forecast period (2021 - 2027). Cellulose esters are cellulose-derived polymers. Papermaking, food packaging, medicines, adhesives, paints, coatings, and plastics are just a few of the industries that employ them. Cellulose esters are chemical molecules that are non-toxic, biodegradable, and renewable. They have better flow-out and pigment wetting capabilities. Furthermore, they are frequently seen as safer alternatives to phthalates and BPA. As a result, they're a wonderful option for people who want to limit their exposure to dangerous substances.

Thanks to its applications in many end-use sectors such as paints and coatings, textiles, paper and pulp, and others, cellulose esters are experiencing a surge in demand from growing nations in Asia-Pacific. Another factor propelling the market surge is its application as a renewable bio-based material. The market players will benefit from the transition to green technology and increased awareness of the benefits of employing biodegradable plastic in composites, optical films, paint coatings, plastics, and laminates, among other applications. 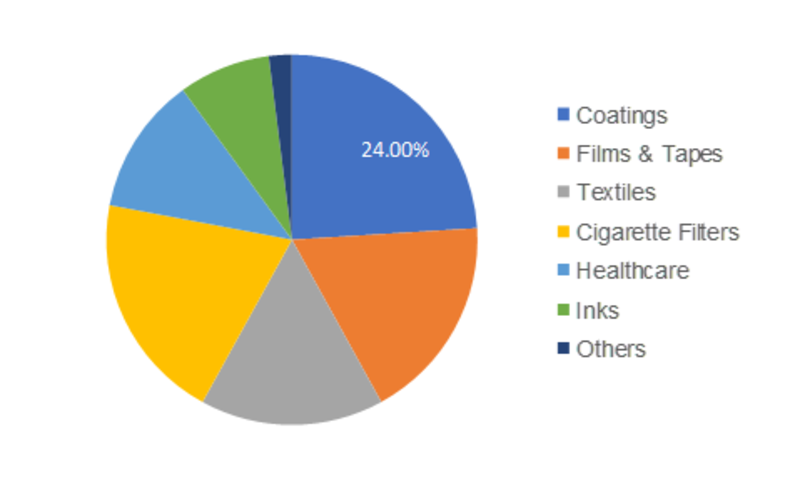 The North American market held the largest Cellulose Esters Market Share in 2017 and is expected to grow at a significant CAGR in the coming years owing to the growing demand for pharmaceutical drugs. The US is the leading country in the region due to growing demand for the product in coatings, inks and due to the presence of leading manufacturing companies in the region such as Celanese Corporation, Eastman Chemical Company, and Rayonier Advanced Materials. The Asia-Pacific Cellulose Esters Market is expected to grow at the highest CAGR in the coming years owing to the surging product demand in the automotive and construction industries. China is the leading country in the region owing to its largest tobacco industry base and growing demand from coating industry. The European market held a significant market share in 2017 and is expected to maintain this trend in the coming years due to the growing pharmaceutical industries, coatings, and films and tapes among others. Germany is the major contributor in the region owing to the continuous technological advancements and wide range of drug delivery systems. France, the UK, Spain, and Italy are other countries contributing to the regional market growth. The Latin American market held a moderate market share due to the significant consumption of the product in inks and coatings. Brazil, Argentina, and Mexico are the prominent countries in the region. The Middle East & Africa market is projected to grow at a sluggish rate owing to limited availability of raw material.

The Cellulose Ester Market has been segmented on the basis of Raw Material, Application, and Region.

By Application, the Cellulose Esters Market is classified into coatings, films & tapes, textiles, cigarette filters, healthcare, inks, and others.

The Cellulose Esters Market has been studied across the five regions—Asia-Pacific, North America, Europe, Latin America, and the Middle East & Africa.

The six nominees for the "Cellulose Fibre Innovation of the Year" innovation award, to be given at the International Conference on Cellulose Fibres hybrid event, have been announced by nova-Institute GmbH (Hürth, Germany). Cellulose fiber solutions adopted by the International Conference on Cellulose Fibres conference advisory members span from orange and wood pulp cellulose to a unique cellulose fiber manufacturing method. German Institutes of Textile and Fiber Research Denkendorf, Fibers365, RBX Créations, Spinnova, Orange Fiber, and Kelheim Fibers are among the six nominees.

Rayonier Advanced Materials Inc., a global pioneer in cellulose-based technology, announced the sale of 28,684,433 common shares of GreenFirst Forest Products Inc. to an Interfor Corporation wholly-owned subsidiary for $43.3 million. The agreement includes a Purchase Price Protection clause that allows the Company to participate in future stock price appreciation under specific conditions and for a set length of time.

What could hold back the cellulose esters market growth?

Which region would have the maximum growth in the cellulose esters market?

North America would propel the market ahead.

Which country would dominate the Asia Pacific cellulose esters market?

Name the applications involved in the cellulose esters market study.

Applications of the market are films & tapes, coatings, cigarette filters, textiles, inks, healthcare, and others.

What are the raw materials involved in the cellulose esters market study?