Global Carboxylic Acid Market is projected to register a CAGR of 5.3% during the forecast period (2021-2030). The global market, in terms of value, accounted for USD 14 billion in 2020.

Global Carboxylic Acid Market is projected to register a CAGR of 5.3% during the forecast period. The global market, in terms of value, accounted for USD 14 billion in 2018.

Carboxylic acid is a polar organic compound that belongs to the carboxyl functional group, which on deprotonation forms carboxylate anion. These chemicals tend to have a high boiling point than water on the account of strong hydrogen bonding. Carboxylic acid groups are generally more acidic than other organic compounds containing hydroxyl groups, but weaker than mineral acids such as sulfuric acid and hydrochloric acid. 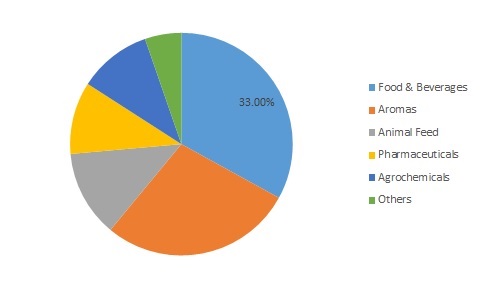 Asia-Pacific was the dominant market for carboxylic acids in 2018 and is projected to register the highest CAGR during the forecast period owing to the rapid industrialization. The increasing use of carboxylic acid derivatives in the expanding food and beverage industry as additives and preservatives is expected to drive the growth of the regional market. Furthermore, the use of carboxylic acids mainly butyric, propionic, and citric in the production of feed dietary acidifiers in the animal feed industry is also expected to support the regional market growth. China, being one of the leading countries in the animal feed industry, is expected to the fastest-growing country-level market in the region. India and other Southeast Asian countries are also expected to propel the regional market growth owing to increasing demand for carboxylic acids derivatives in various end-use industries such as rubber and pharmaceutical. For instance, the industrial output in China increased by 6.3% in 2018, whereas a similar trend has been observed in India with a growth rate of 3.4% in the first half of 2019.

North America accounted for a substantial market share in 2018. The growing demand for carboxylic acids in the food & beverage, pharmaceutical, and chemical industries is expected to drive the regional market growth. In addition, esters of carboxylic acids on the account of strong odor are used in the production of perfumes, which is projected to boost the demand in the region.

Europe is expected to showcase significant growth during the forecast period owing to extensive use of carboxylic acid derivatives in the personal care & cosmetic industry to produce beauty care products and dyes. Germany is the major contributor followed by France and the UK as it is the largest market for cosmetics and personal care products in the region. According to the Cosmetics Europe, the European cosmetics and personal care market was valued worth USD 92.7 billion in 2018, with Germany accounting USD 16.2 billion of the total net worth.

Latin America and the Middle East & Africa are expected to witness substantial growth during the forecast period owing to growing industrialization and per capita disposable income of individuals.

The global carboxylic acids market has been segmented based on product, end use, and region.

Based on end use, the global market has been divided into food & beverages, aromas, animal feed, pharmaceuticals, agrochemicals, and others

The global market, by region, has been categorized into North America, Europe, Asia-Pacific, Latin America, and the Middle East & Africa.

Jan 2022 The Food and Drug Administration will hold a virtual public hearing on the safety of carbadox, an animal health medication used in hog feed to prevent bacterial diseases such as salmonella and swine dysentery. The FDA wants to hear about the benefits of carbadox, as well as scientific data and information about its safety and potential carcinogenic residues in swine tissue. They concluded that because there is no established relationship between the noncarcinogenic residue quinoxaline-2-carboxylic acid (QCA) measured by the approved method and the residue of carcinogenic concern, the approved method measuring the concentration of QCA in animal tissue does not allow CVM to determine conclusively whether the residue of carcinogenic concern remains in the tissue.

At what rate is the market projected to expand during the conjectured period?

The market is projected to expand at rate of 5.3% during the conjectured period.

What factors have induced significant market growth across the globe?

Which factor can most likely slow down the market growth in the near future?

The health hazards with regard to over use of a few types of carboxylic acids could demotivate the demand rate and most likely slow down the market growth in the near future.

Which region is believed to accrue the fastest growth rate during the evaluation period?

Growing Demand for Food Across the Globe is Expected to Boost the Demand for Carboxylic Acid Duri...