The Carborundum (or silicon carbide SiC) Market is expected to reach to over USD 6.6 billion  by end of 2030.

Carborundum, also known as silicon carbide (SiC), is a crystalline compound made of silicon and carbon. It exhibits superior properties such as high thermal conductivity, low thermal expansion, and stiffness, which makes it suitable for use in various industries. SiC is increasingly used in abrasives, refractories, and ceramics. The product finds use in numerous applications including steel & energy, electronics & semiconductors, automotive, aerospace & defense, medical & healthcare, and fabrication. Various types of carborundum used in different applications include black SiC, green SiC, metallurgical SiC, coated SiC, micro grit SiC, and refractory SiC.

Growing electrical & electronics industry is the prime factor propelling the growth of the carborundum market. The product consumption is increasing in a wide range of electronics applications such as kiln furniture, process components, electrical field grading, and surge protection due to its superior properties such as chemical inertness, thermal shock resistance, abrasion hardness, and sinterability.

The product use is increasing in the automotive industry owing to the high density, excellent oxidation resistance, chemical inertness, high strength, and high thermal shock resistance. Carborundum is used in numerous automobile applications including bearing & wear parts, brake pads, abrasives, and diesel particulate filters, among others. Flourishing automotive industry in the developing countries is fueling the product demand. Additionally, growing demand for electric vehicles due to less carbon emission is likely to drive the market growth at a significant rate in the coming years.

Furthermore, increasing application of carborundum in aerospace & defense, foundry, steel, foundry, and energy industries, among others is expected to drive the market growth during the review period. 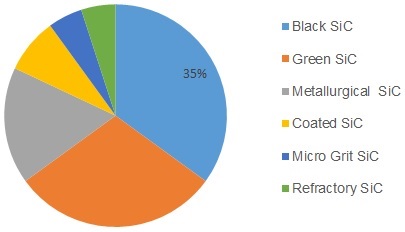 The market in Asia-Pacific accounted for the largest share of global carborundum market owing to the growing iron & steel industry in the developing economies such as India, China, and Japan coupled with expanding industrial base in the region.

Furthermore, growing electronics and semiconductors industry due to the increasing use of electronic devices is driving the product demand. Increasing automobile production and increasing aerospace & defense industry with increased spending on defense equipment by the government are other vital factors propelling the market growth in the region. The product consumption is increasing in the energy sector owing to the rising demand for renewable energy to reduce pollution. For instance, the Ministry of New and Renewable Energy of India is set to provide custom and excise duty benefits to the solar rooftop sector.

The market in North America is expected to register significant growth during the review period owing to the growing steel production in the region. Rising demand for steel from the major end-use industries such as automotive, construction, electronics, and aerospace & defense, among others is augmenting the market growth. Furthermore, the presence of established aerospace & defense industry and rising demand for the semiconductors and electronic devices in telecommunications, automobiles, and pharmaceuticals are propelling the market growth.

Europe is another prominent market owing to increasing demand for carborundum in the automotive industry with increased production of electric vehicles to reduce carbon emissions. Expanding electrical & electronics and aerospace & defense industries are projected to propel the market growth in the region.

The markets in Latin America and the Middle East & Africa are expected to grow at a moderate rate during the review period owing to increasing automotive, construction, and electronics industries.

The global carborundum market has been segmented by type, application, and region.

Based on the application, the global carborundum market has been classified as steel & energy, electronics & semiconductors, automotive, aerospace & defense, medical, fabrication, and others.

Geographically, the market has been divided into five key regions, including Asia-Pacific, North America, Europe, Latin America, and Middle East & Africa.Recent DevelopmentDecember 2021- a wholly-owned subsidiary of Carborundum Universal Limited (CUMI) CUMI International Limited, Cyprus (CIL), has signed an agreement for the acquisition of 100% of an existing company in Germany that will be a step-down subsidiary of CUMI for the matter of 28,600 Euros. The present name of the firm is Altstadtsee 492. V V GmbH and CIL have proposed it to be transformed to M/s. CUMI Gmbh after the acquisition. The company was incorporated on October 20, 2021, and has yet to start.August 10, 2021- The Murugappa Group has disclosed to make a fresh investment of over ₹200 crore in Kerala that includes funds to expand its present facilities in the state. Accosting to the Chennai-based industrial group, details of the funding will be worked out soon. October 2021- Carborundum Universal Ltd acquired equity shares in PLUSS Advanced Technologies Private Limited (PLUSS) on October 6, 2021, totaling 71.99% of the paid-up equity capital. PLUSS, along with its wholly owned subsidiary in the Netherlands, after the acquisition comes into effect, will be the subsidiaries of CUMI.

What would be the global caroborundum market valuation by 2025?

The valuation would surpass USD 5.8 billion.

Name the end user industries involved in the carborundum market?

Which industry would play a prime role in the carborundum market growth?

The electrical and electronics industry would play the major role.

Which region would lead the carborundum market growth?

The Asia Pacific region has the potential to drive the market ahead.

Name types that are part of the carborundum market study?