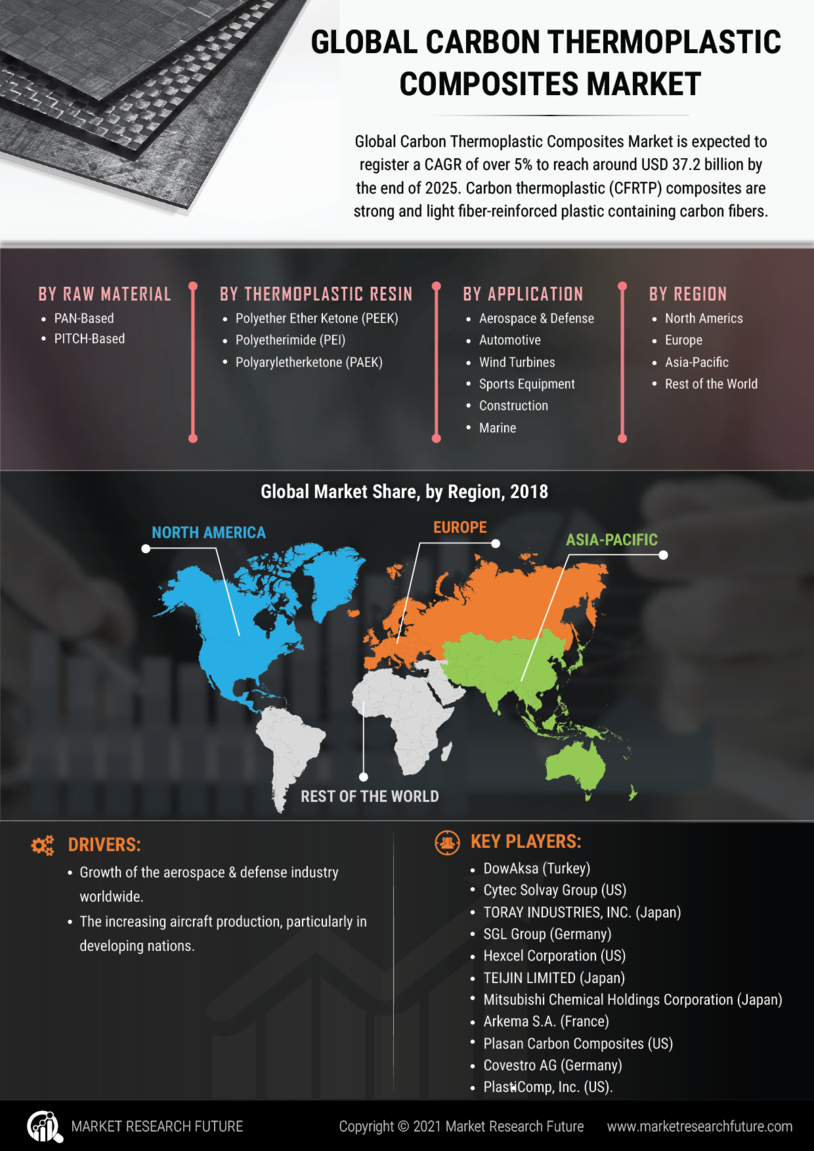 The Carbon Thermoplastic Composites Market is expected to register a CAGR of over 5% to reach around USD 37.2 billion by the end of 2025.

The global demand for carbon thermoplastic composites is primarily driven by the growth of the aerospace & defense industry worldwide. The increasing aircraft production, particularly in developing nations, including China and India, is likely to fuel the demand for carbon thermoplastic composites at a significant rate during the review period. Additionally, the increasing adoption of aircraft emission standards for new aircraft by the International Civil Aviation Organization to reduce impact of aviation industry on greenhouse emission is expected to drive the market growth. The emission standards will be applicable to new aircraft design from 2020 and to all in-production airplanes by 2023. Carbon thermoplastic composites are used in the manufacturing of various components of aircraft such as the wing skins, forward fuselage, flaperons, and rudder

The preference for thermoplastic composites over composites incorporated with thermoset polymers is increasing owing to their superior performance, such as an increase in production rates and no for curing after consolidation. This is another important factor driving market growth.

Additionally, the increasing automotive production and the surge in demand for lightweight vehicles to increase vehicle efficiency are expected to propel the growth of the global carbon thermoplastic composites market 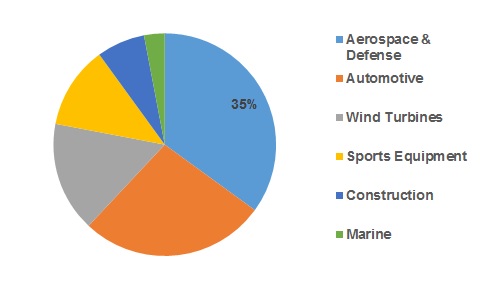 The market in North America accounted for the largest share of the carbon thermoplastic composites market in 2018 and is expected to witness significant growth during the review period. The growth of the carbon thermoplastic composites in this region is characterized by the rapidly expanding aerospace and defense industries as a result of the rising demand for single-aisle airplanes. In 2017, the aerospace & defense industry in US generated around USD 865 billion. The presence of major players in the aerospace industry, such as Boeing and GenCorp, is another important factor bolstering the market growth in the region. The reviving automotive industry due to rising demand for fuel-efficient products is likely to drive the market growth in this region. The increasing demand for renewable energy due to fluctuating oil prices is also increasing the product demand in the region.

Europe is expected to be a prominent market for carbon thermoplastic composites on account of the increasing R&D in the aerospace & defense industry. Additionally, targets set by the European Union to reduce the level of carbon emission by automobiles is expected to boost the product demand in the region.

Asia-Pacific is expected to be the fastest-growing market for carbon thermoplastic composites due to the rapidly growing aerospace and automotive industry, especially in developing countries such as India, China, Thailand, and South Korea. For instance, the air traffic in India grew by around 18% year on year and 280 million during April-February 2017-2018. Additionally, Japan-based Asahi glass developed a technology based on fluoropolymer to improve the impact strength of CFRTP by reducing the rate of water absorption.

The Latin American market is expected to exhibit considerable growth concerning the growing automotive production, especially in Brazil. For instance, automobiles production in Brazil grew by around 5.2% in 2018 and is expected to grow at a significant rate in the coming years.

The Middle East & Africa is likely to witness moderate growth during the review period on account of the growing end-use industries, including automotive and aerospace & defense

The global carbon thermoplastic composites market has been segmented based on raw material, thermoplastic resin, application, and region.

Based on raw material, the global market has been divided into PAN-based and PITCH-based.

Based on thermoplastic resin, the global market has been segmented into polyether ether ketone (PEEK), polyetherimide (PEI), polyaryletherketone (PAEK), and others.

Based on application, the global market has been segmented into aerospace & defense, automotive, wind turbines, sports equipment, construction, and marine.

The global market, by region, has been classified into North America, Europe, Asia-Pacific, Latin America, and the Middle East & Africa.

At what CAGR is the global carbon thermoplastic composites market predicted to grow over the forecast period?

The carbon thermoplastic composites market is predicted to grow at a 5%CAGR between 2017-2025.

What will be the possible market valuation of the carbon thermoplastic composites market?

The global carbon thermoplastic composites market is predicted to touch USD 4.002.8 million by 2025.

Which region is expected to have maximum share in the carbon thermoplastic composites market?

North America is predicted to have maximum share in the carbon thermoplastic composites market during the forecast period.

Who are the key players profiled in the carbon thermoplastic composites market?

What are the key factors that are adding to the growth of the carbon thermoplastic composites market?

Increasing Use Of The Carbon Thermoplastic Composites In Aircrafts Manufacturing Is Set To Drive ...