Captive Power Generation Market is expected to register a ~5.5% CAGR during the forecast period.

The major factors driving the growth of the global captive power generation market is the increasing energy intensive industries in developing countries. Moreover, existence of the element of cross subsidy in power tariff and rise in per unit cost of power generation is expected to contribute to the growth of the captive power generation market. Also, the industrial sector uses about 54% of the total energy generated worldwide.  Industrial production is expected to grow substantially during the forecast period, owing to the rising demand for manufactured products. Based on energy consumption, there are three types of industries- energy-intensive manufacturing, non-energy-intensive manufacturing, and non-manufacturing. The energy-intensive manufacturing industries are among the largest users of energy sources for production. Additionally, increasing industrialization in the developing countries is expected to positively trigger the demand for captive power generation as most of the industries require continuous power supply and operate remotely. For instance, most companies are focused on reducing the use of carbon-based fuels for energy production. The oil & gas industry is also gradually moving towards clean and continuous sources of energy for providing electricity to certain production activities, such as lighting and fluid pumping, which is likely to boost the demand for captive power plants in the oil & gas sector. Similarly, companies in the food & beverage industry are either fully automated or semi-automated, which leads to high demand for electricity from food manufacturing plants. All these factors are likely to increase the demand for captive power generation facilities during the forecast period. 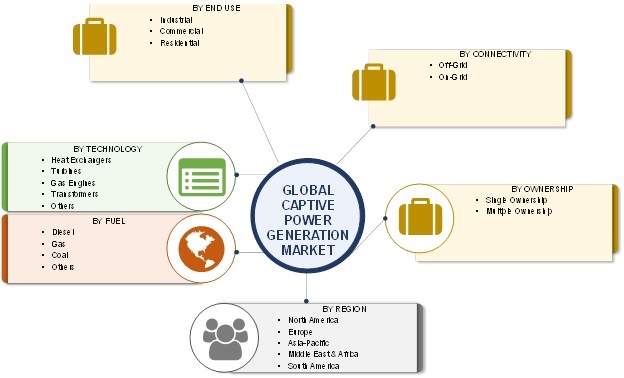 Global Captive Power Generation Market has been segmented based on Technology, Fuel, Ownership, Connectivity, and End Use. Based on technology, the captive power generation market is divided into heat exchangers, turbines, gas engines, transformers, and others. The gas engines segment is expected to hold the largest share in the global market during the forecast period as gas engines make ideal captive power plants where there is a localized supply of gas. This might be from a gas pipeline but can also be transported via vehicle as compressed or liquefied natural gas or biomethane. Such factors are anticipated to lead to a significant share of the gas engine segment. Based on fuel, the global market is divided into diesel, gas, coal, and others. The gas segment is expected to hold a largest market share as many key companies are utilizing gas for captive power plants. For instance, Reliance Industries (India) operates a 2,100 MW captive power plant at its Jamnagar refinery in Jamnagar, Gujarat. Moreover, with new innovations coming up, the gas segment is anticipated to hold a largest share as gas as a fuel offer higher efficiency.

Based on region, the captive power generation market is segmented into Asia-Pacific, North America, Europe, the Middle East & Africa, and South America. Asia Pacific accounts for the largest share of the captive power generation market due to increasing urbanization and industrialization. Moreover, with increasing focus on Make in India reforms, the Indian government continues to reduce barriers and regulatory limitations on foreign investment, which, in turn, is helping in strengthening the industrial and manufacturing sectors over the coming years. Such factors are likely to drive the demand for captive power generation in the region as increasing number of industries will lead to rising demand for electricity.

At what CAGR is the global captive power generation market predicted to grow during the forecast period?

Which region will lead the global captive power generation market?

What are the key factors driving the global captive power generation market?

Who are the key contenders profiled in the global captive power generation market?