Capnography Market Information By Type (Capnograph and Disposable), By Device (Handheld and Others), By Application (Procedural Sedation, Critical Care, and Others), By End User (Hospitals, Clinics, and Others), and By Region (Asia-Pacific, North America, Europe, and Rest of the World)—Forecast till 2028 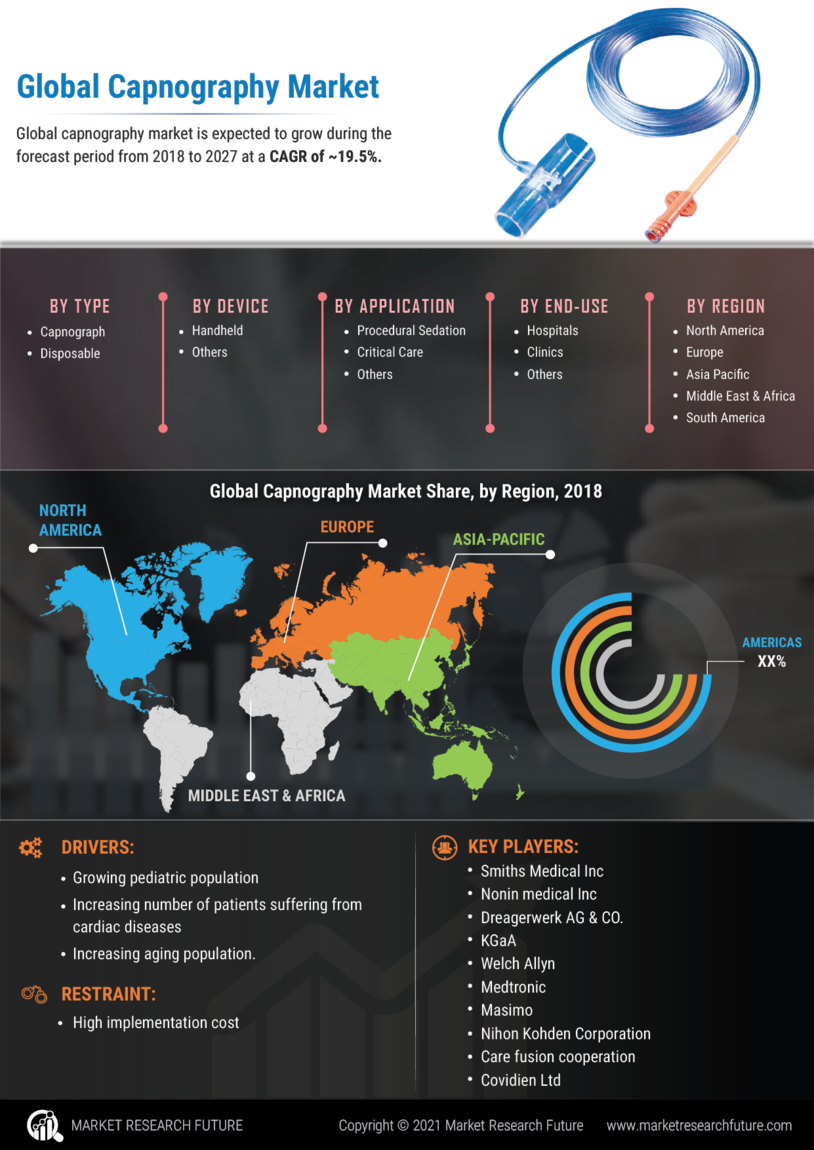 The capnography market size is expected to reach USD 3.7 billion by 2030 at CAGR of 33.70% from 2021-2028. Throughout the projection period, technological advances, the incidence of respiratory disorders, and helpful government efforts are expected to fuel market expansion. The increasing use of capnography in treating respiratory illnesses is anticipated to increase the medical effectiveness of these devices in patient monitoring because of their better reliability and efficiency. It is the best method for respiratory monitoring because of capnography equipment's low cost and non-invasive nature. The market is benefiting from the growing elderly population and changes in lifestyle. Technology developments have made it possible to create capnography equipment that is portable, effective, and automatic. The market's expansion is anticipated to be impeded by elements including strict government rules relating to the safety and effectiveness of capnography, a shortage of qualified specialists, and little to no product differentiation between companies.

Market participants like Medtronic saw a spike in demand for capnography devices and other respiratory system-related goods during the COVID-19 pandemic. This was primarily because, by US FDA rules, capnography devices fell under the category of non-invasive remote monitoring devices and can be used to support patient monitoring during the treatment of COVID-19. This had a favorable effect on market expansion during the pandemic. These specialists introduced capnography expertise into these settings and implemented the technology to enable better patient outcomes. The pandemic has boosted product sales as remote respiratory monitoring equipment demand has grown, which has, in turn, boosted market expansion.

Two significant aspects projected to boost the  market during the forecast period are the development of portable or point-of-care capnography devices and the clinical advantages of capnography equipment over pulse oximetry. The market for capnography is also expanding due to guidelines for its clinical application being developed and an increase in surgical procedures. However, it is also predicted that the lack of qualified personnel to manage capnometers will restrain the market for capnography throughout the forecast period.


One of the main elements promoting the industry's growth is the rising number of people suffering from respiratory disorders worldwide. According to an article in the National Center for Biotechnology Information (NCBI), lung cancer fatalities worldwide are expected to increase by 86% by 2035. The number is predicted to double in some countries, such as America, the Western Pacific, and South-East Asia. This emphasizes the growing demand for capnography equipment to detect early respiratory depression and airway abnormalities, particularly during sedation, preventing serious complications. Additionally, it is anticipated that variables, including tobacco use, family history of lung cancer, and air pollution, among others, would increase the number of people worldwide who suffer from respiratory disorders.


The clinical role of capnography equipment during surgeries and postoperative surveillance is not well understood by healthcare professionals in emerging and less developed nations. Additionally, there isn't much clinical evidence to support the safety & efficacy profile of capnography equipment for various applications, which has slowed its acceptance among surgeons in industrialized nations. Therefore, it is anticipated that over the forecast period, the optimal uptake of capnography among healthcare professionals in key regions will be constrained by a low understanding of its clinical role, and there aren't enough clinical studies to back up its effectiveness profile across different applications.


Because of factors like growing target patient populations, rising prevalence of lifestyle disorders, growing public-private investment in product development & commercialization, less restrictive regulatory environments, and rising medical tourism in these emerging nations (such as India, China, Brazil, and Mexico), the market presents significant growth opportunities for players. The demand for capnography equipment in emerging nations is being driven by an increase in minimally invasive surgical procedures (such as endoscopic and laparoscopic procedures), ongoing improvements in healthcare infrastructure, an increase in target patient populations, and a growing number of hospitals and surgical centers.

Based on devices, the  market is divided into handheld and others. The  capnography market growth was prominently high under the handheld product segment in 2021 as a result of growing usage due to the advantages of portable capnography. During the projection period, multi-parameter products are anticipated to register the fastest CAGR. Their expanding use in procedural sedation and emergency medicine is associated with this increase.

Based on end user, the market is divided into hospitals, clinics, and others. The hospital sector accounted for more than 58% of the  market's sales in 2021. The product is utilized as a preventative step to deal with catastrophic incidents in ICUs. Due to their simplicity of use, less invasive nature, and improved capabilities for measuring patient ventilators, capnography techniques are widely used in hospital settings. 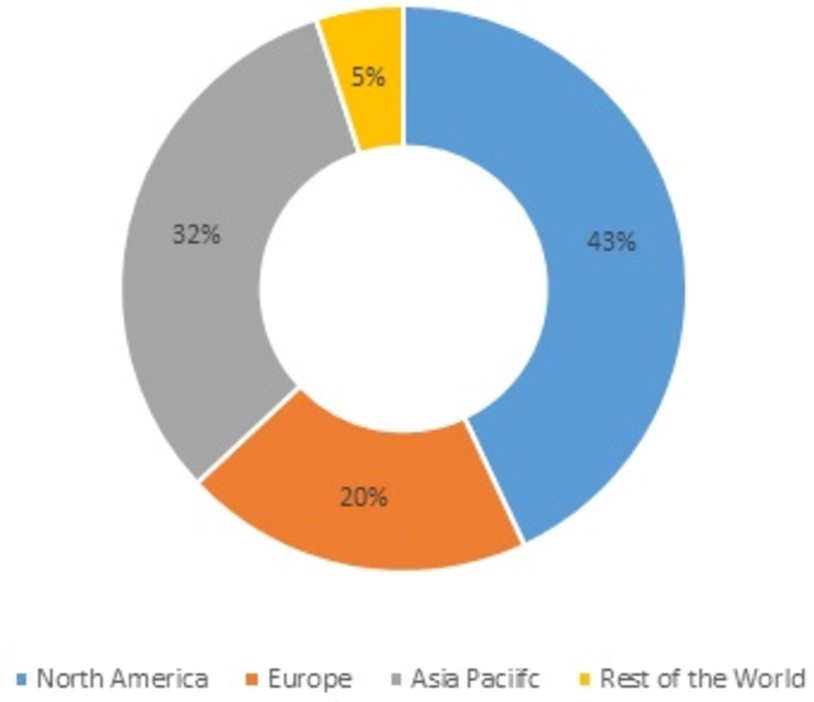 By region, the  capnography market has been categorized into Asia-Pacific, Europe, North America, and the Rest of the World. The fastest CAGR is anticipated for Asia-Pacific during the review period. The largest share of the market was in North America.

North America contributed a major share of the worldwide market value in 2021. The key factor driving the regional market is the increased prevalence of respiratory disorders due to unhealthy lifestyles and high-stress levels. The American Society additionally advised the use of capnography during procedural sedation and anesthesia of Anesthesiologists. Additionally, it is anticipated that in the upcoming years, the adoption of new reimbursement models for respiratory and monitoring solution procedures in this region and strict regulatory guidelines intended to ensure patient safety, medical efficacy, and clinical efficiency will fuel the demand for the product.

The fastest market growth is projected in Asia-Pacific due to the region's aging population and rising disease prevalence. This is mostly due to the rise in government funding for the construction of capnography equipment stations, strict rules that encourage wider adoption of pollution monitoring technologies, and developments in the technology of environmental sensors. The strong growth is due to ongoing healthcare system improvements, increased healthcare spending, and rising end-user knowledge of the usage of capnography technology in the region.

There are tier-1, tier-2, and local companies in the market. Vendors invest in new product launches, geographic expansions, alliances, and acquisitions to stay competitive. For instance, in May 2021, Masimo and Philips struck a licensing agreement that allows Masimo NomoLine Capnography and O3 Regional Oximetry to be used with specified Philips patient monitors. Furthermore, in April 2021, Radius PCG received FDA approval in the United States, according to Masimo Corporation. It is a portable real-time capnograph with wireless Bluetooth connectivity that allows patients of all ages with seamless, tetherless mainstream capnography.

Scope of the  Capnography Market Report

The study's objectives are outlined in five stages. They are as mentioned below:

To determine and infer the drivers, restraints, opportunities, and challenges in the  capnography market growth

To provide detailed information into the leading market players operating in the market. The company's financial performance during the last two to three years will be described, along with product offers, recent developments, SWOT assessments, and significant business efforts.

What is the study period of the capnography market report?

What is the capnography market growth rate?

A CAGR of ~33.70% is anticipated for the market in the upcoming ten years, according to  capnography market research.

Which region accounts for the biggest portion of the worldwide market?

What is the expected capnography market size by 2028?

Who are the leading market players in the market?

Holoxia Limited (UK), Zspace (US), Echopixel (US), and EON Reality (US) are the largest businesses present on the world market.