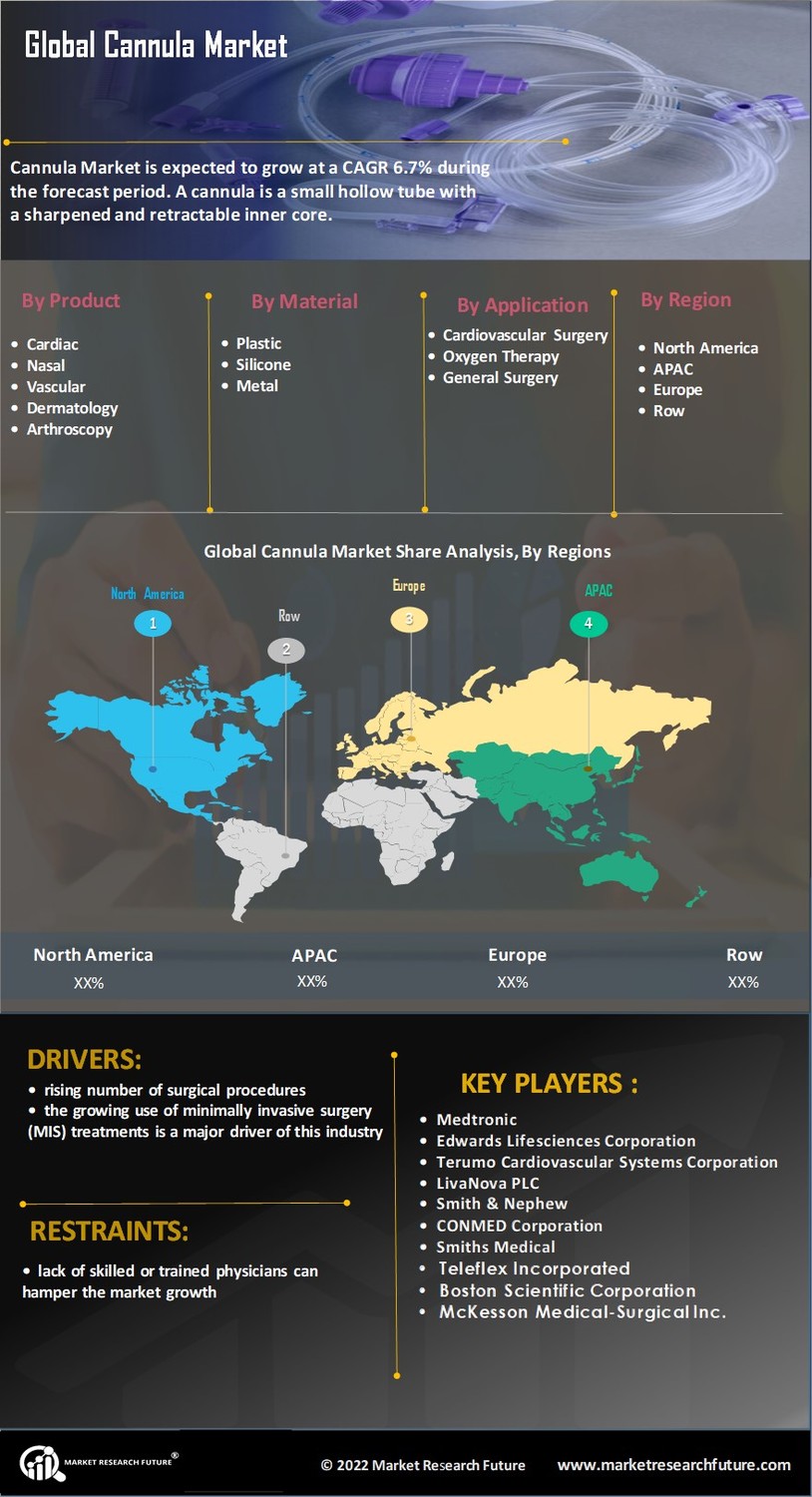 Cannula Market is expected to grow at a CAGR 6.7% and market value at USD 286.4 billion during the forecast period, says Market Research Future (MRFR)


Cannula Market size is expected to reach USD 286.4 billion by 2030 at CAGR 6.7% during the forecast period 2022-2030, says market research future (MRFR). A cannula is a small hollow tube with a sharpened and retractable inner core that is inserted into a vein, artery, or body cavity to deliver medication and remove fluids. Cannulae are available for a range of procedures. During heart surgery, for example, an intravenous cannula is used to achieve cardiopulmonary bypass. A nasal cannula is used to supply oxygen by placing the plastic tubing behind the nose. It's also commonly used for filler injections because it's less painful, reduces the danger of bleeding and bruising, and has more flexibility than hypodermic needles. It is frequently utilized in hospitals, ambulatory surgery centers (ASCs), blood banks, laboratories, and pathology laboratories all over the world due to its many qualities. The growing number of surgeries, innovations in healthcare facilities, more investment in research & development, a large patient pool, and rising government funding are the major factors driving this market. A primary driver of this business is the expanding usage of minimally invasive surgery (MIS) therapies.

Geographically, the Americas is anticipated to dominate the Cannula market owing to rising healthcare expenditure, increase in number of surgeries and developing healthcare infrastructure. According to Centers Medicare and Medicaid Services, National Healthcare Expenditure grew by 4.3% to USD 3.3 trillion in 2016 from the previous year. Europe is expected to hold the second largest position in the market. The market growth in this region is attributed to the government support and improving healthcare related research & development activities. The Cannula Market in Asia-Pacific region consists of countries namely China, Japan, Republic of Korea, India, Australia and Rest of Asia-Pacific. The Asia-Pacific region is expected to be fastest growing region owing to the increasing demand for minimally invasive surgeries and rising healthcare spending. According to the World Bank Group, India spent 3.89% of its Gross Domestic Product (GDP) on health. The Middle East & Africa are expected to hold the least share of the market. The market growth in this region is expected to be driven by a developing healthcare infrastructure.Recent Development


LivaNova announced Bi-Flow, a novel range of femoral artery cannulas that allows stable bidirectional perfusion and is the only femoral arterial cannula that prevents limb ischemia, in July 2019. Europe and Canada are among the markets where this new equipment is accessible. In addition, the corporation plans to extend its market in the United States, thereby boosting its industry share. Terumo Blood and Cell Technologies' (Terumo BCT) unique plasma collection technology was authorized by the US Food and Drug Administration (FDA) in March 2022. Terumo BCT is a medical technology company that leads the cannula market. Rika is a next-generation automated technology designed to improve the experience of plasma facility employees and donors. Rika was founded in response to the industry's need for technological advancement and process optimization to boost productivity and quality while maintaining donor safety and a sufficient plasma supply.

Market of Cannula, by Product:

Market of Cannula, by Material


Market of Cannula, by Application

Market of Cannula, by End User


Market of Cannula, by Region: