Boom Truck Market Research Report: Information, by Capacity (Up to 15 Tons, 15 Tons–25 Tons, 25 Tons–35 Tons and Above 35 Tons), Application (Construction, Utilities, Industries and others) and Region (North America, Europe, Asia-Pacific and Rest of the World) - Forecast till 2027 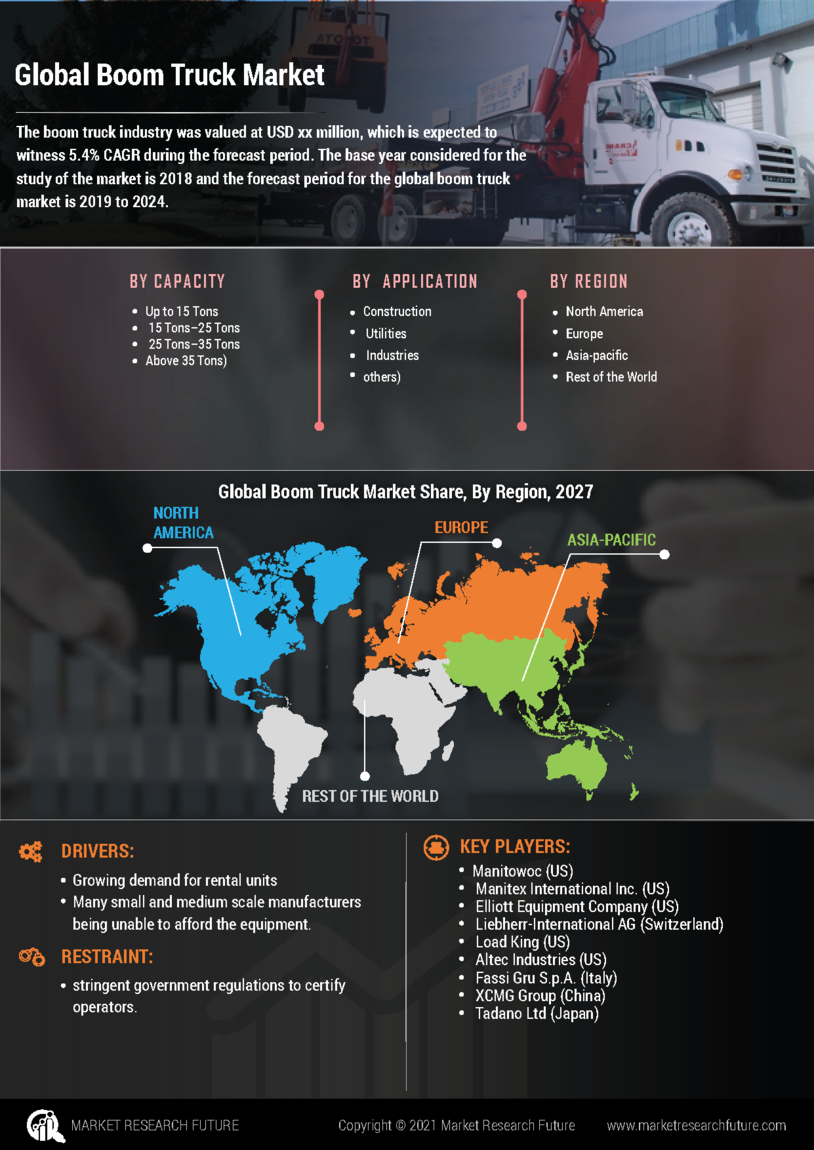 The global boom truck market has witnessed significant growth in the past few years, owing to various factors, such as the growing oil & gas industry and versatility of boom trucks. The overall boom truck industry includes boom trucks that can lift heavy equipment, carry loads on the flatbed, and hoist personnel using crane buckets. This makes these cranes versatile and convenient as the end users can use them for multiple tasks in construction and project sites where setting up traditional cranes can be unfeasible. Furthermore, as a boom truck crane is a single unit, it can easily reach sites in difficult terrains. It can even operate without support pads, which are essential for conventional cranes. These cranes are used to load materials on trucks, which then transport them to various destinations. They consume less space and have a shorter assembly time as well as they are smaller than traditional cranes, which enable them to operate in smaller urban spaces. Furthermore, they do not need to be installed at the site, which makes the inspection time much shorter than small boom truck cranes. These factors make boom truck cranes suitable for use in a wide range of industries including construction and oil & gas.

Boom trucks are available on rent depending on the need for projects as per the application, which can be attributed to the lesser costs associated with renting than purchasing new cranes. With many small and medium scale manufacturers being unable to afford the equipment, there has been a rise in the boom truck rental business. Therefore, the growing demand for rental units creates a growth opportunity for the global boom trucks market during the forecast period.

However, the growth of the market might be hindered by the stringent government regulations to certify operators in regions such as North America and Asia-Pacific.

Geographically, the global boom trucks market has been segmented into North America, Europe, Asia-Pacific, and the rest of the world. Asia-Pacific accounted for the largest market share of around 35% and is expected to retain its dominance during the forecast period. This can be attributed to the growth of the construction industry and the improved financial conditions in this region. Moreover, the rapid industrialization and urbanization in emerging economies, such as China, India, and Japan are expected to contribute significantly to the growth of market. Furthermore, Asia-Pacific is one of the key regions experiencing significant growth in the mining industry. Countries such as China, India, Australia, and Indonesia dominate the mining industry in this region. These countries are also major producers of minerals and metals, such as gold, diamonds, base metals, coal, tungsten, tin, and platinum. In the last decade, Asia-Pacific has emerged as one of the highest consumers of metals, coal, and mineral, owing to the continuous growth of the region’s economy. The Chinese government has put in efforts to convert its medium to large state-owned enterprises into corporate organizations to make them globally competitive. Thus, as a result, government authorities have signed several joint ventures with foreign investors.

North America accounted for the second largest market, which is anticipated to exhibit sustainable growth rate during the forecast period. This can be attributed to the growing oil & gas industry in the region.

On the basis of capacity, 25 tons–35 tons segment accounted for the largest market share of 33% in the global boom truck market. This segment is anticipated to witness significant growth rate, as these cranes mostly have a higher number of sections in the crane truck than the cranes included under the others segment. This is primarily because the higher number of sections help improve the stability of the cranes under heavy load conditions. Most of the cranes in this segment are equipped with multiple jibs to improve the functionality of cranes. These features make the 25 tons–35 tons segment the dominating segment in the global boom truck market.

On the basis of application, the construction segment held the largest market share in 2018, which is expected to hold its position by 2024. This segment is also anticipated to witness the maximum growth rate in the market due to a rise in the demand for the construction of infrastructure across the globe.

The global boom trucks market is extremely fragmented with many players operating in the market. These players have adopted various strategies to expand their global presence and increase their market shares. Some of the key strategies adopted by the players are expansions, investments, acquisitions, product development, and agreements.

At what CAGR is the boom truck market projected to grow during the forecast period?

Which region is expected to dominate the boom truck market?

The Asia Pacific is expected to dominate the boom truck market.

Which application segment will lead the boom truck market?

The construction segment will lead the boom truck market.

Which capacity segment will dominate the boom truck market?

The 25-35 tons segment will dominate the boom truck market.

Which factors may limit the boom truck market?