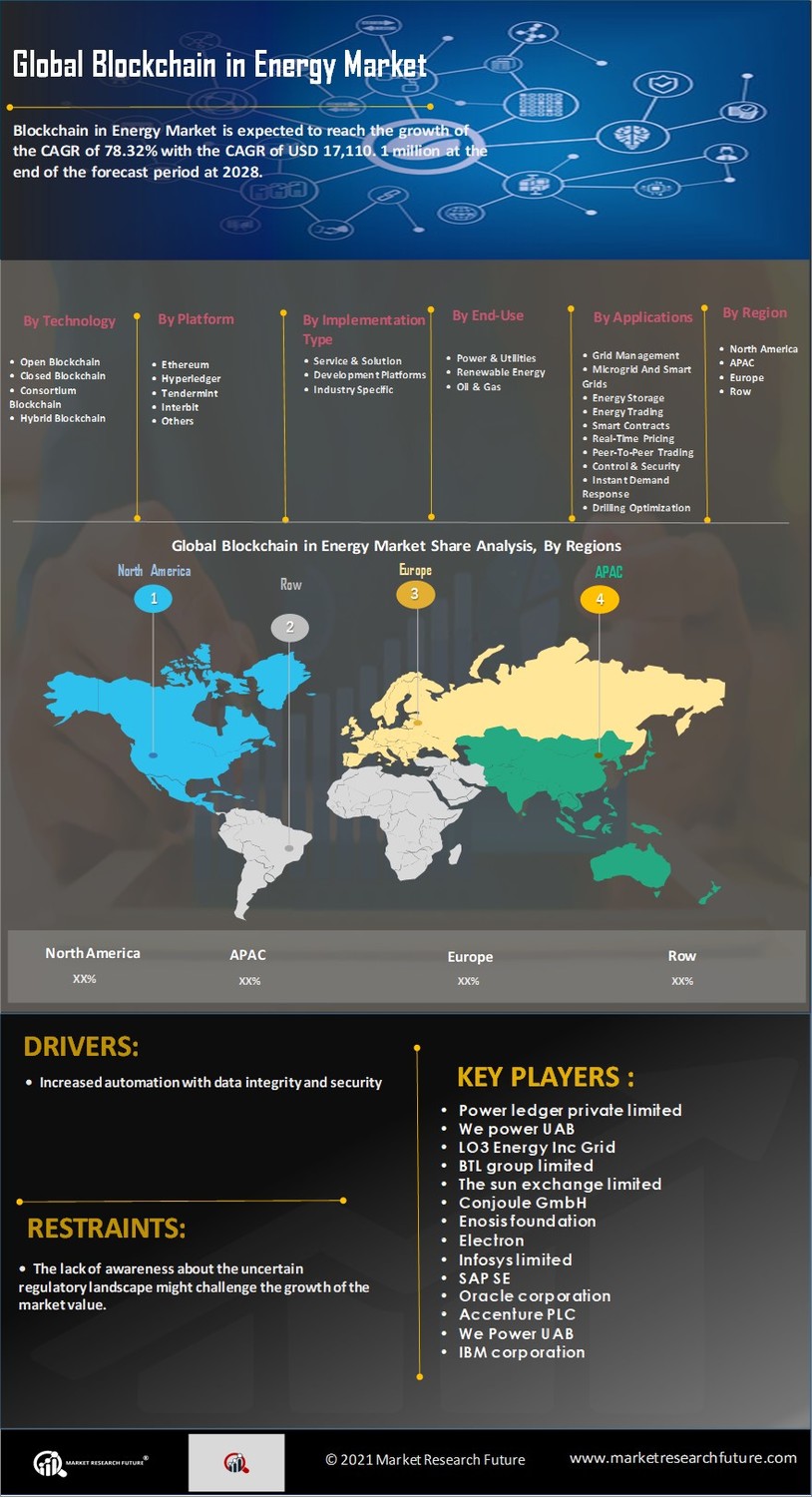 The Blockchain in Energy Market has the chance of growing with many positive aspects from the year 2020. This market has been recorded with the growth of USD of 279 million during the year 2019. And this is expected to reach the growth of the CAGR of 78.32% with the CAGR of USD 17,110. 1 million at the end of the forecast period at 2028.

In recent days due to technological development, there are tremendous changes in the Blockchain in Energy Market. The rising internet of things and the development in technology are the main factor for the growth of the market size.

Here in this report, the Blockchain in Energy Market is the explanation about the current market status after the outbreak of the pandemic in 2020. This report clearly explains the drivers, restraints, growth opportunities, profit, the impact of the pandemic, challenges, major key players' recent developments are available in this report.

As the outbreak of the pandemic across the globe has brought a great impact on the market. Due to the spread of the pandemic and because of the quick rise in the number of positive cases. There is no other option for the government than to advise the people to opt for the lockdown option. People were advised to stay at their home and prefer the work from home option. There were drastic changes in the lifestyle of the people after the impact of the pandemic.

After the spread of the virus, many markets have been lost. Due to this, the key players are in search of investment. They are looking for funds to increase their production rate and also to increase their market value.

The growing nature of the technology because of the adopting nature of the people is one of the added advantages for the growth of the Blockchain in Energy Market Value. The increase in the use of solar energy for charging the electric vehicle and the e-mobility is also one of the main reasons which boost the growth of the market. Adopting the product and demand for the product has created a good impact among the people.


The Middle East and Africa

The key players are using many ideas and techniques to develop the growth of their business. But due to the impact of the pandemic, there is less involved in the growth. This is because the people are less responsive to the development in the technology and also not getting the awareness about the growth in the technology. So the key players are working to create awareness in using the Blockchain in Energy Market. The key players are also expanding their business to the next level by introducing their branches in many regions. And also they are interested in collaborating with other companies to complete the large scale output.

There are regions that are holding the share of the Blockchain in Energy Market. Some of the main regions where there is the great revenue are North America, Europe, Asia Pacific and the rest of the world.

North America is the region that holds the largest amount of share and dominates the Blockchain in Energy Market. This is because the countries like the US, Mexico and Canada are in the process to provide awareness among their people about the benefits of using the technology. Even the government are taking steps to promote the benefits and make sure that their people are using the new technologies.

The Asia Pacific is the region that is following the path of North America. This growth is because the investors are interested in investing in the key players who are available in the Asia Pacific. Even due to the rapid population and the increase in urbanization the Asia Pacific region is being in second place.

Europe is expected to reach the development in the forecast period. This development is because of the people's interest in using the Blockchain in Energy Market.

These are some of the key players who are ruling the Blockchain in Energy Market.

What is the expected growth of the Blockchain in Energy Market in the forecast period?

The Blockchain in Energy Market Value is calculated with the USD of 180.3 million in 2017. And then it is expected to reach the value of the USD of 5000 million in the forecasting period.

What is the significant factor motivating the global blockchain in the energy market?

The operational costs, capital expenditure, risk management, and security are the significant factors motivating the global blockchain in the energy market.

What are the segments affecting the global Blockchain in Energy Market Value?

Which region is going faster in the valuation of blockchain in the energy market’s growth?

The European region is one of the forefront regions in the adoption of blockchain technology and influencing the market’s growth.

What are the regions which are covered by the Blockchain in Energy Market?

The top regions which are driving the growth of the Blockchain in Energy Market are North America, Asia Pacific, Europe etc.

How is Blockchain used in renewable energy?

We believe blockchain is a key tool to speed up the process of decarbonising the economy, as it makes transactions traceable, secure and quick. This technology makes the supply of green energy more efficient, flexible and transparent, which incentivises the production and consumption of 100 % renewable energy.

Does Blockchain use a lot of energy?

Surprising Fact. A single bitcoin transaction uses roughly 707.6 kilowatt-hours of electrical energy–equivalent to the power consumed by an average U.S. household over 24 days, according to Digiconomist.

In competitive landscape, the report covers the development strategies adopted by the companies between 2017 and 2018. The key players adopted various strategies to retain and/or expand their market share. The key strategies followed by most companies within the global blockchain in energy market were that of product launch followed by the partnerships and collaborations.

WePower is a blockchain based energy trading and financing firm with specific focus in renewable energy. Renewable energy producers such as solar and wind power operators can raise their own operating capital by issuing their own energy tokens using WePower. This is different from other blockchain based operators since power producers with WePower will have their own tokens rather than a standard token issued by other blockchain providers. The main advantage of using this WePower technology is that renewable energy produced by individual producers can be traded directly with buyers by selling energy upfront at below-market rates. WePower is currently in the process of launching a pilot project in Elering, an Estonian transmission and distribution operator for its blockchain technology implementation. The primary goal of this project is to demonstrate the capacity of Ethereum blockchain technology in recording of country-level energy production and consumption data. The company believes that this will enable blockchain based power markets to venture into reality.

LO3 Energy Inc., is a U.S. based technology provider that also offers business development consulting services. The company has its major operations on decentralized business models with specific focus to innovative technologies in sectors such as energy, cleantech and currency systems. LO3 Energy has diverse operational portfolio including operations such as the development of utility design hardware, policy advocacy, and final product design including technical standard setting. LO3 energy also benefits from its deep expertise in cryptography, cybersecurity, peer-to-peer consensus along with distributed energy computing. The company’s major strength is its unique experience of integrating blockchain technology with different energy generation techniques, such as thermal and renewable sources.

Grid + was established by ConsenSys, a global leader in blockchain technology through its continuous research in implementing blockchain technology for the energy industry. The company is currently focusing on bringing next-generation energy efficiencies to the energy market by developing new hardware and software solutions including blockchain. Grid+ was formed with the objective of revolutionizing the way the energy market operates by functioning as a commercial electricity retailer in deregulated market. Ethereum platform is used to enable customers pay and settle payments real-time, which significantly reduces costs. Furthermore, Grid+ Ethereum based blockchain platform can instantly introduce efficiency in energy retailing and this enables renewable energy production more sustainably and efficiently. Ethereum based blockchain enables Grid+ to enable automated billing and transaction processes with payments being recorded and moved through smart contracts.

BTL Group is a blockchain technology based in Vancouver, Canada which has its operations on developing blockchain technologies for various industries and businesses. The company is the creator of InterbitTM, a next-generation blockchain platform, which has the unique capability of joining thousands of InterbitTM blockchains that can enable enhanced security along with data integrity and privacy than other blockchain platforms. One of the most important advantages of the BTL’s InterbitTM platform is that businesses and enterprises can build their own applications focusing on trading, settlement, remittance, audit, and back-office processes. BTL Group believes that this flexibility of their blockchain platform must enable InterbitTM to become the professional-grade blockchain development tool of choice among various businesses. In Europe, the BTL Group is currently testing its InterbitTM platform with the trading arms of oil and gas supermajors along with leading energy traders including Eni Trading & Shipping, Total, Gazprom Marketing & Trading Limited and Vattenfall for delivering gas trading and settlement.

Enosi foundation is an Australia based blockchain energy market operator with a focus on increasing the utilization of clean locally generated energy. Enosi develops blockchain based open-sourced systems that are used to sell excess energy generated from renewable energy sources, such as solar PV within communities. In addition to that, the Enosi platform creates smart contracts, which will enable rapid deployment and the use of the renewable energy. Smart contracts are generated through a mobile application, which is commonly known as a “Decentralised Application” or dApp. The app does not require a centralized server or 3rd party server as it runs on decentralized blockchain network. For higher adoption of blockchain based distributed energy applications, Enosi foundation has set up partnership programs with energy retailers, such as Solar Analytics and Energy locals, who are based in Melbourne.

The key players adopted various strategies to retain and/or expand their market share. Out of all the key strategies adopted by the companies in the global blockchain in energy market, LO3 Energy based in U.S. had the maximum number of partnerships and collaborations with a share of 36%, during the period 2017 - 2018. Power Ledger (Australia) accounted for 18% share in partnerships and collaborations during the period. For instance, LO3 energy in partnership with Siemens established blockchain technology based microgrid pilot in Brooklyn, U.S. the project facilitates the residents with solar panel based power generation to sell their excess generated energy to their peers. This peer-to-peer power transfer takes advantage of blockchain technology to minimize the amount of energy lost through transmission.

BTL group (Canada) has undergone the highest number of on new product development with a share of 43% each during the period 2017-2018. For instance, on April, 2019, BTL Group announced that its proprietary next-generation blockchain platform InterbitTM is made available for public testing and feedback. This will enable users to create their own multiple blockchain solutions and they can also provide their feedback. This is specifically done to address the privacy and scalability shortcomings of existing generations of blockchain platforms. In January 2018, BTL Groups European energy project entered its second phase following its initial pilot implementation phase. The project is now focused on expanding its scope to enable straight settlement processes and also bringing wider participation from the industry.