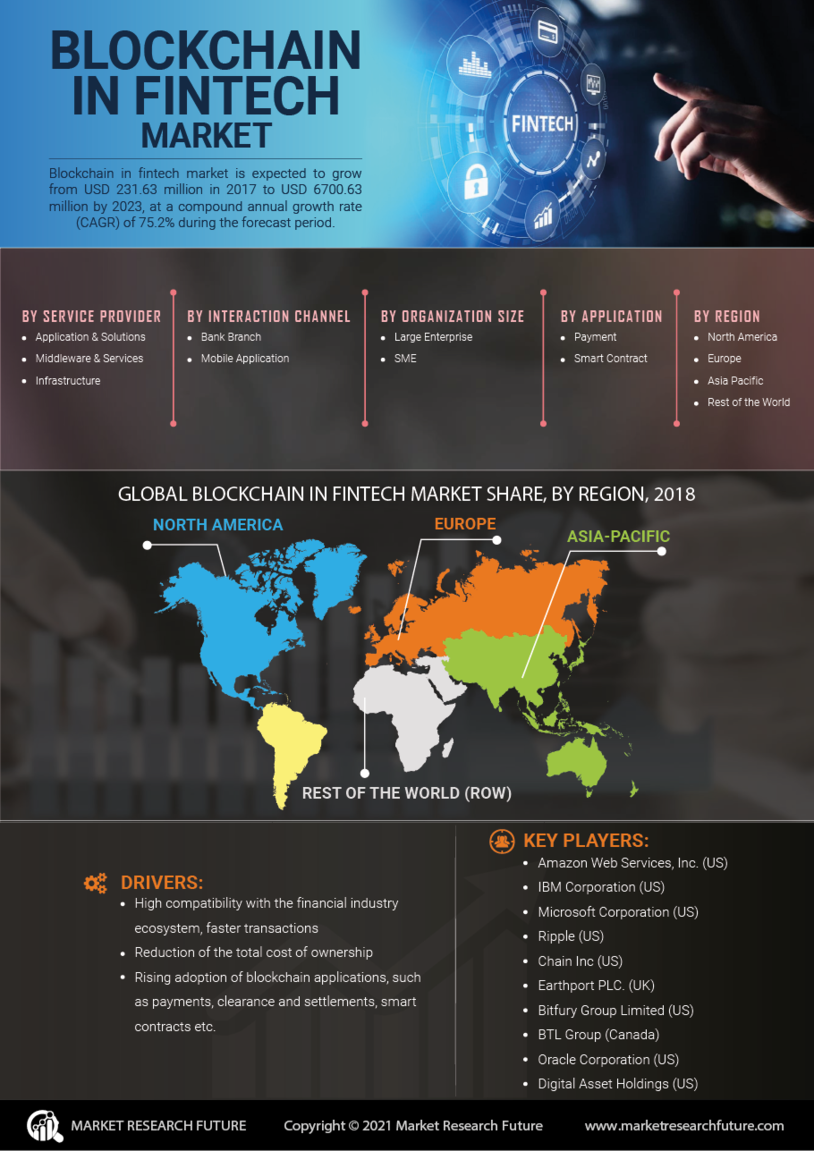 The Blockchain in Fintech market size is expected to grow from USD 231.63 million in 2017 to USD 6700.63 million by 2023, at a compound annual growth rate (CAGR) of 75.2% during the forecast period. Blockchain is a decentralized database that records transactions. The transparent tool allows the users to view the transactions and the data entered are irreversible. Unlike other databases, the blockchain is a secured and decentralized database that makes the processing of data faster. The technology provides enhanced control over the data and eliminates the duplication of data. With the aid of technology, financial institutions and banks have eliminated the reconciliation costs and settlements for the transactions.

The data that enters the technology is stored in the block which is a fixed event and is locked into a space. Every time the block is filled with the data, they are added to the existing chain and are arranged in chronological order. Such processes have made it easier to access and verify. Especially such arrangement has eliminated the corruption to a great extent. The network is highly secured as it cannot be accessed by any unauthorized user as the data will remain safe in various other areas to which they are distributed. The banking and financial sectors are increasingly utilizing the Blockchain in the Financial technology owing to the characteristics like higher compatibility, secure transactions, and rapid transactions, while at a reduced cost of ownership.

The Pandemic has created an economic shock in several industries; therefore several industries have adopted digitalization to showcase resilience. The data entered the supply chain can't be available for the users or trusted either. Therefore the organizations are increasingly shifting the crucial financial transactions to blockchain solutions. This has enabled the organizations to achieve strong data quality and integrity.

The pandemic has propelled the industries to adopt digital transactions and digital payments in several developed countries. The transaction of the value of the assets has been processing slowly in the past, with the advent of Blockchain technology, the process is done very quickly as there is no intervention of traditional banking solutions. The restrictions in the movement have influenced people to utilize online services more than visiting the banks. In this case, the digital transaction has paved way for the cybercrimes and lack of security measures, Blockchain technology has eliminated fake identities thereby ensuring safe transactions.

The data are not stored centrally, which has eliminated the risks of getting hacked. The data are stored across the peer-to-peer network which has eliminated the risk of centralized failure and other computer crackers. The digital identity that is provided by the blockchain has enabled the users to select the identity for themselves and permit them to share the identity with whomever they choose. Such processes enable additional protection of the data.

There is no interruption of a third party in the validations. Traditional transactions require several validations from third-party people, which take the processing longer and are expensive. The elimination of such third-party validation has reduced the costs and time. Such factors have increased the growth of Blockchain in Fintech Market.

The increasing adoption of Blockchain Technology in various other financial conditions like bitcoin has increased the opportunity for the growth of the Blockchain in Fintech market. Additionally, the failures in the validations processes are eliminated. The recent reports regarding the huge financial loss that was due to the poor validation or failures in the validation process have propelled several industries to adopt Blockchain technology in recent years.

The lack of awareness of digital transactions and digital accounting in several developing countries has hindered the growth of the Blockchain in Fintech Market in several countries.

The uncertain regulations and frameworks of the BlockChain technology and lack of technical expertise in several countries have hindered the growth of the Blockchain in Fintech industry. Moreover, the technology is complex and the interruptions of human errors and the cost of a block are some of the major restraining factors in the Blockchain in the Fintech Market.

The lack of awareness of the technology in the majority of the countries is the challenge in the Blockchain in Fintech Market. Small industries that deal with minor transactions might find the solution a financial burden as the maintenance and the system is not compatible with the banking sector who tends to modify their data regularly.

Additionally, the time lags created during the transaction and the initial costs for the implementation are the major challenges of the Blockchain in Fintech industry in recent years. Owing to the decline in the economic condition of several industries, they are hesitant to deploy the solution.

The application and solution providers of blockchain technology are responsible to provide the infrastructure that is required to develop the platforms and is currently leading the market growth. The non-banking financial operations have created a huge demand for the market in recent years. Currently, large enterprises are emphasizing implementing Blockchain applications to further augment their business growth. The attractive features of the blockchain in Fintech Market like the scalability of the cloud-based deployments and easy availability have attracted small-sized and medium-sized industries to invest in the applications.

The multi-sig process is utilized in bitcoin which is a multiple signature process that makes the bitcoin more secure. The prominent user of the Blockchain in Fintech industry is bitcoin. Such factors have propelled the leading industries to implement Blockchain technology. The higher security level during the transaction and storage with the network transparency and the decentralized administration processes have augmented the growth of the Blockchain in Fintech industry. If any of the nodes in the network is corrupted, the other nodes 'references can be used to correct the node. Such factors have ensured the transaction history is irreversible.


Based on Organization Size:

Based on Industry Vertical:

The Global Blockchain in fintech market is experiencing steady growth in the current economic condition due to the increasing growth of advanced technologies and cloud-based technologies in several countries. Currently, North America is expected to dominate the market over other countries. The increased adaptation of advanced technologies and upgraded infrastructure and growing adaptation of the Internet of Things have propelled the growth of Blockchain in Fintech in North America.

Asia-pacific is the second-fastest-growing region in the market due to the changing lifestyle and trends in the region. The presence of leading market players in the region and increased investments in the region have increasingly influenced the adaptation of Blockchain technology in various methods and sectors like retail and other essential industries.

The novel platform is focusing on international payments and the platforms offer the highest scalability and integrate multiple participants into the financial supply chain process while enabling the highest security and transparency.

What is the historical valuation of the market?

What is the valuation of the market calculated?

North America, Europe, Asia-Pacific, and the rest of the world are the most grossing one in terms of market share.

Which key players are actively participating in the growth of the market?