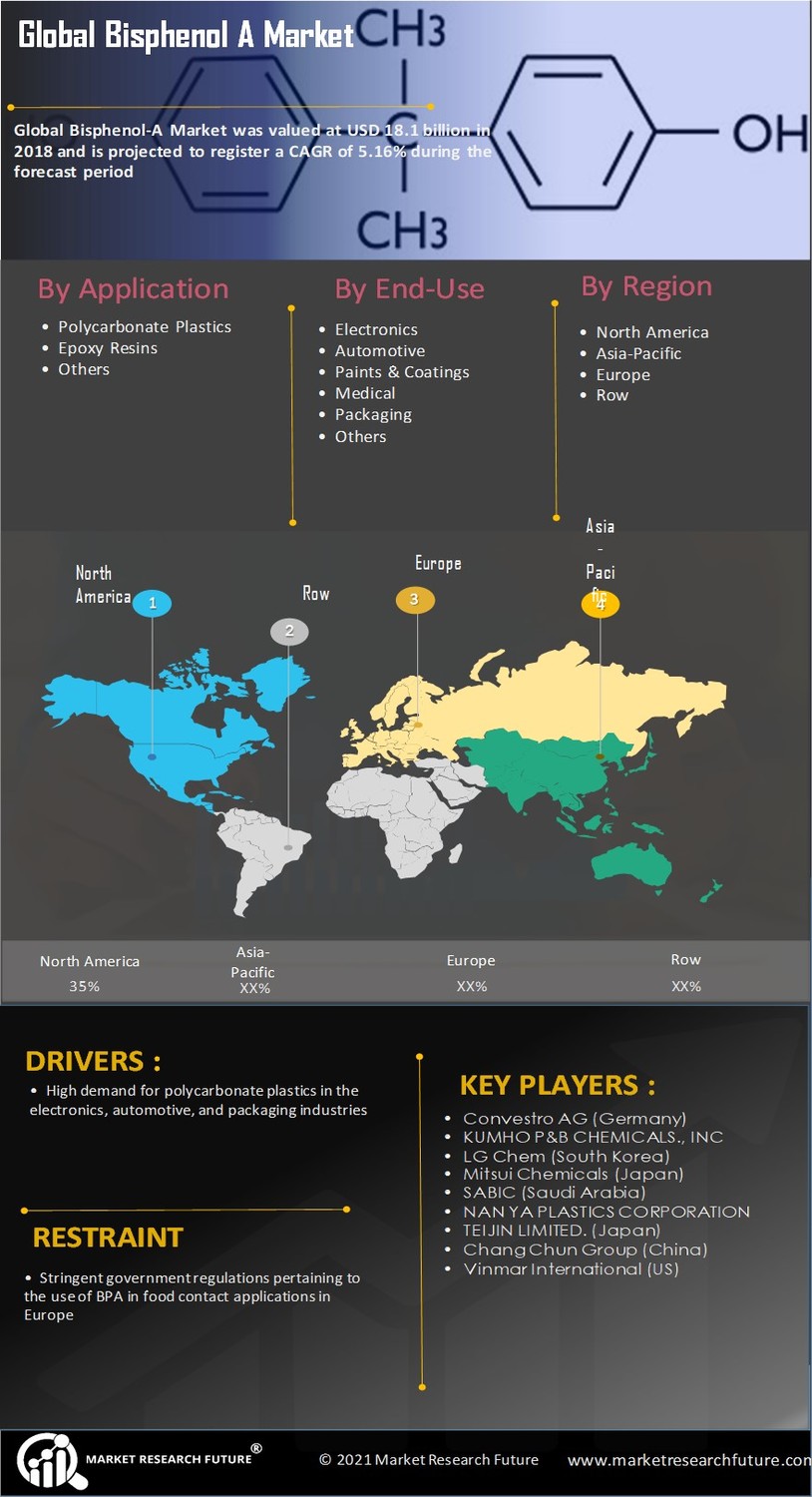 According to MRFR analysis, Global Bisphenol-A Market was valued at USD 18.1 billion in 2018 and is projected to register a CAGR of 5.16% during the forecast period.

Bisphenol A, commonly abbreviated as BPA, is an industrial chemical primarily used in the production of polycarbonate plastics and epoxy resins, among others. BPA-based products are known for their high optical clarity, toughness, and excellent electrical resistance. Due to the aforementioned properties, BPA finds a variety of applications in numerous end-use industries such as electronics, medical, automotive, and packaging. For instance, BPA-based polycarbonate plastics on account of their electrical insulation and versatility are extensively used in the electronics industry to produce digital disks such as DVDs, compact discs, and Blu-ray discs. Besides, BPA is also used in the manufacturing of medical equipment, tableware, plastic containers, thermal print paper as well as an antioxidant in glues, plastics, and inks.

The major factor driving the growth of the global market is increasing demand for bisphenol A in the expanding electronics and automotive industries. Bisphenol A is broadly used to produce polycarbonates and epoxy resins, which are then used in the production of printed circuit boards, LEDs, keyboards, computers, and others. For instance, the Consumer Electronics Association (CEA) in January 2018 predicted an increase of 3.95% in the consumer electronics sector over 2017 with a retail revenue of USD 351 billion. This is likely to fuel the demand for BPA during the review period. The increasing use of polycarbonate plastics to produce lightweight and fuel-efficient vehicles and in numerous automobile applications such as impact-resistant bumpers, sunroofs, and others is consequently expected to boost the demand for the product during the review period.

The surging demand for epoxy resin to produce water-based coatings, protective coatings for metal cans and containers due to their high corrosion resistance and adhesion is further driving the demand of BPA in the paints and coatings industry.

Additionally, the increasing use for high strength and lightweight polycarbonate plastics in the packaging industry for storage of food products, beverages, and others is expected to propel the product demand during the forecast period. Furthermore, the increasing use of BPA-based wind turbine rotor blades in the wind energy sector is projected to create lucrative opportunities for the key players operating in the global bisphenol A market.

However, BPA is an endocrine disruptor, thus behaves in a similar way to estrogen and interferes with the production, secretion, function, and elimination of natural hormones in the body. It affects the brain development and reproductive system, especially in babies and fetuses, owing to which its use in food contact applications has been restricted in the US and Europe. This is likely to hinder the growth during the review period.

In 2018, bisphenol A was priced around USD 1700–1800 per ton across the globe and is expected to follow the similar trend during the forecast period.

BPA, one of the most utilized industrial chemicals worldwide, is produced by condensation of acetone and phenol in the presence of a strong acid catalyst mainly hydrochloric acid and is accompanied by methyl mercaptan promoter.

What is the projected market value of the global bisphenol A market?

Global bisphenol A market is expected to record a substantial market growth from its last recorded value of 18.1 billion in 2018.

What is the estimated growth rate of the global bisphenol A market?

Global bisphenol A market is projected to register a moderate 5.16% CAGR in the forecast period.

Which application is expected to witness the highest growth?

The Polycarbonate Plastics segment is poised to observe substantial demand over the review period.

What is the end-users segment of the global bisphenol A market expected to witness the highest growth?

The electronics segment is slated to expand as the fastest-growing segment.

Who are the significant players operative in the global bisphenol A market?