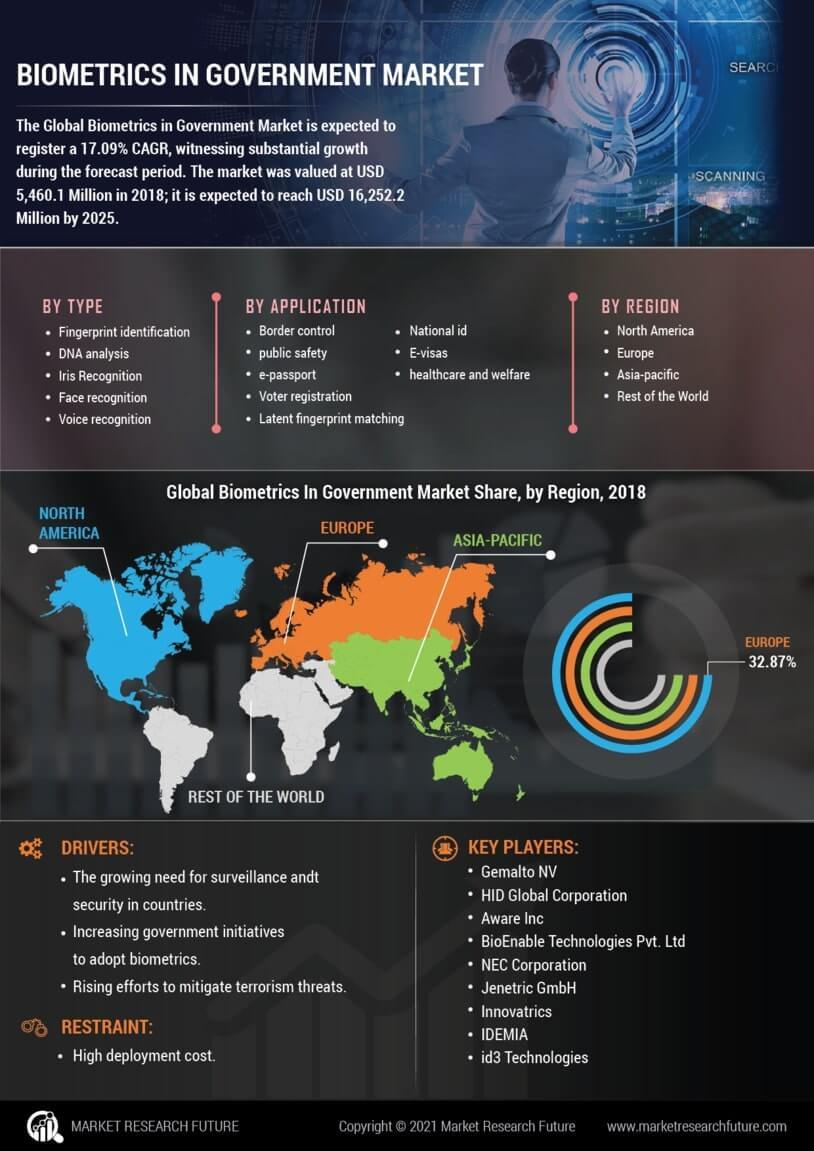 The Global Biometrics in Government Market is expected to register a 17.10% CAGR, witnessing substantial growth during the forecast period. The market was valued at USD 5,460.1 Million in 2018; it is expected to reach USD 16,252.2 Million by 2025.Biometrics is a modern technology used for the identification and authentication of personnel by examining and analyzing personal traits of a person like fingerprints, iris, voice, palm, vascular patterns, and signatures & typing patterns. These biometrics also do the DNA analysis of a person and store this information in its cloud storage, detects it when that individual either physically presses his palm or fingers or gets his eyes scanned by the scanner. These biometrics also uses PIN-based methods in situations of emergency such as where these systems stop working or are disrupted due to electricity and network problems.Biometrics In Government Market COVID-19 Analysis:

The coronavirus pandemic has given a very hard time to most of the manufacturing, developing, production, and logistic units of the market. Due to this pandemic situation, restrictions were imposed by the government of different countries. These restrictions have impacted biometrics in the government market very drastically. Due to this pandemic situation, all the manufacturing units and other working organizations have been shut down where these biometrics are used to prevent intruders and maintain the security of their premises. Also, these restrictions have led to a decrease in registrations for government-mandated policies for individual identification.

With the increasing government initiatives to adopt biometrics making their installation mandatory in all the public and private organizations is one of the major factors that will be responsible for the growth of this market. Also due to rising concerns to alleviate the terrorism threats and ensure full-proof security, the demand for biometrics is increasing very rapidly which in turn is another element that may enhance the growth of this market. Lastly, the growing need for surveillance and security of countries & regions the demand for biometric systems is increasing at a very fast pace and it is another key element that will be responsible for the expansion of this industry.Biometrics In Government Market Restraints:

Firstly the cost associated with the deployment of these systems is very high and that is one of the major factors that will hamper the growth of this market. Secondly incontinent placement of these biometric systems at the border entry and exit areas and due to weak signal strength in such areas these devices don’t give efficient results which is another factor that may act as a barrier in the growth of this industry. Also, the data stored in such devices is uploaded on cloud-based systems, and due to which that data is open to hacking purposes and can face major data security concerns which is another crucial factor that may restrict the expansion of this industry. Lastly, the dependence of these biometric systems on internet networks which can be disrupted just by a shortage of electricity is another element that may hinder the growth of this market.

Many new innovative things are happening in this sector. A new master card has been developed in which the person can store his iris pattern, voice recognition, fingerprint impression, and DNA analysis from before, and every time he doesn’t need to get his eyes, voice, and fingerprint scanner with this software. You just have to swipe it or scan it with the device that has this type of software incorporated in it. These devices are not used just for preventing intruders from entering airports or colleges or business organizations but are also becoming an important feature of mobile phones for unlocking purposes or just keeping some things secure from the eyes of others. Many studies and attempts are being made so that these scanning devices can work in offline mode and they shouldn’t be connected to the internet every time. Lastly, the basic concern of the key manufacturers is to develop such types of devices that can be operated without any human effort required.

Biometrics in Government’s market share is anticipated to witness significant growth owing to the performance of different market segments. Among these, the fingerprint identification segment will be the fastest-growing and also contribute towards this market growth more than any other segment. Fingerprint identification is the oldest and even now the most popular method in the field of biometrics. In this method, the verification is made by the government by scanning the little ridge formations formed and found on fingertips. Also, face recognition technology is used in the USA at airports, colleges, business organizations, etc. There is software that recognizes the voices and covers those voice signals into digital signals and if stored once, can be recognized easily. Lastly, pattern recognition is used by iris scanning software in which the color patterns of eyes are traced and can be stored for future purposes. For an amplifying use the market has been Segmented into the following on different bases:

The Biometrics in Government industry movements is remarkably working in 6 major regions of the world that is North America, South America, Asia Pacific, Europe, and Middle East & Africa. Among all these regions, the North American region will dominate this market, and the reason attributed to it is the rising adoption of biometrics by enterprises and government organizations. In this region the biometrics are used by both, department of homeland security (DHS) and the department of defense (DOD). These respective organizations are using biometrics for various reasons such as border & immigration management, enforcement of the law, access control, intelligence, counter-terrorism, and credentialing. Europe will be the second-largest market due to the use of biometrics by the European Union and executing it in the authentication of an individual’s id. The use of facial and fingerprint technology assists the government in lowering crime rates. Asia Pacific region will also witness notable growth due to the implementation of various government rules and regulations applying biometrics security systems in most of the private and public offices and organizations. The Middle East and African region will witness moderate growth due to the lack of technological advancements in this region.

To get a detailed and profound idea about the Biometrics in Government market insights, it is very important to create a competitive environment amongst the different key players at different market locations all around the country. All the market players are competing with each other globally in the international markets by implementing various types of strategies such as product launches and upgrades, mergers and acquisitions, partnerships, etc. The prime players of this market include:-

The Biometrics in Government industry report presents a shift analysis that includes market drivers, opportunities, and restraints that are available in the global Biometrics In Government market. The report discusses the impact of covid-19 on the key players of this market. The report also tells about the market segmentation on a different basis and how a competitive environment is developed among the key players around the globe. At last, the report presents some recent developments in this industry.

What are the type based segments of the biometrics in government market assessed in the report?

At what CAGR is the biometrics in government market expected to expand?

What is expected to be the value of the biometrics in government market by 2025?

Which region is poised to dominate the biometrics in government market?

North America dominated biometrics in government market in 2018 and is poised to continue its dominance over 2025.

At what CAGR is North America biometrics in government market expected to augment?

The biometrics in government market is poised to mark 17.3% CAGR.

By type, which segment is poised to dominate the biometrics in government market?

By type, the fingerprint identification segment is poised to dominate the biometrics in government market.

What are the segments of the biometrics in government market on the basis of application?

The segments of the biometrics in government market on the basis of application are border control, e-passport, public safety, voter registration, national id, e-visas, latent fingerprint matching, and healthcare & welfare.