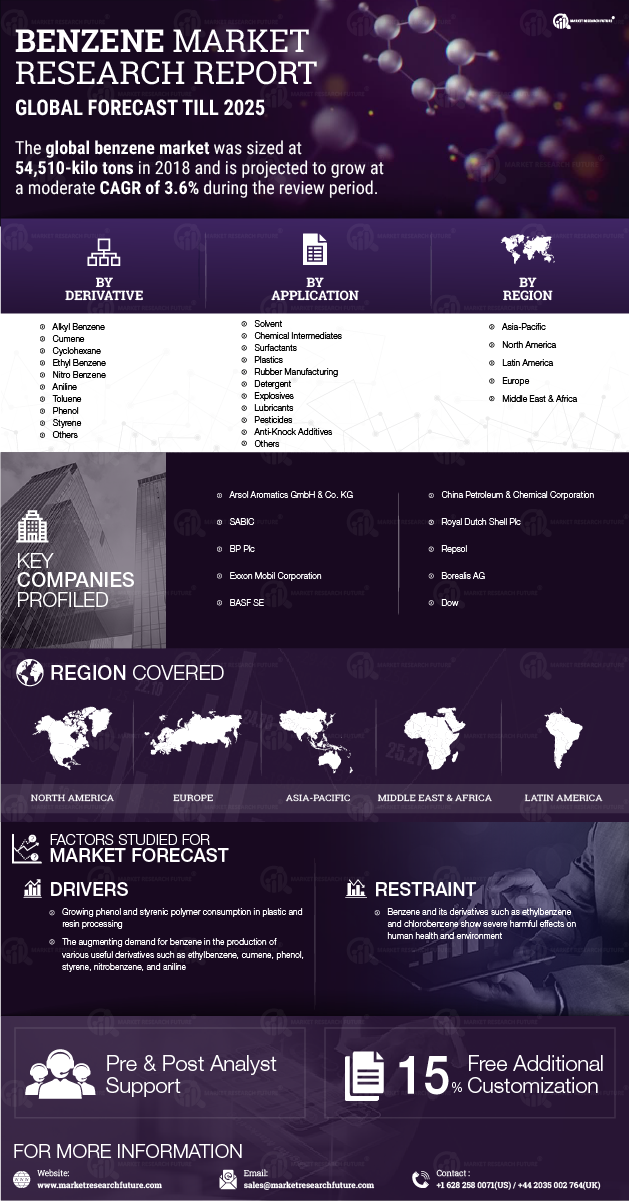 Benzene is an organic compound with a gasoline-like odor and a sweet smell. Other properties of benzene include high flammability, abundant availability in nature, and no odor. It can be extracted from the crude by refinery or manufactured as a bi-product in refineries and steam crackers. Its chemical properties are as follows:

COVID-19 pandemic has affected almost every individual across the world and even every business. With worldwide lockdown and the terrible spread of the virus, the financial, physical, and mental stress seems to have taken a toll on everyone. The business has suffered some serious setbacks, and thinking to take them further is a difficult task. But some guidance and a thorough benzene industry size study bring them on track and ensure that they work according to the current benzene market value.

The reports provided to them have a detailed analysis of the market with a quantitative and qualitative study conducted by the industry experts. After the in-depth research of the effect of COVID-19 on the market, the report prepares the organization for the future and enables them to cope with the past. The pandemic is not over yet, so we need to make sure that we follow the advice from the experts and make our lives better.

The primary factor driving the market’s growth is the increase in demand for phenol and steric polymers in plastic and resin processing industries. Also, benzene is used to produce derivatives useful in various areas, including phenol, styrene, and amine, etc.

The production and use of benzene and even its derivatives are very harmful to human health and the environment, causing serious damages to both. Hence, the government’s stringent policies subsequently hamper the benzene analyzer market growth to be a major restraint.

Regulatory implications seem to have a considerable effect on the growth of the market. The government and the regulatory bodies, before passing the law, ensure that they are laid down not only for the good of the living beings but also for the environment. As the benzene market value has significant effects on human beings’ health, serious laws and regulations have been passed by the governments of different regions.

Not only Benzene but also its derivatives tend to pose major health issues. Acute eye and throat irritation is seen in human beings after long exposure to ethylbenzene. Also, it tends to contaminate the groundwater, which further causes serious health hazards. No doubt, market growth is taking place at a significant pace; hence, it is expected to touch the heights of success within the next few years. The regulatory bodies of different regions have also been taking care that the global benzene market follows strict rules to prevent ill effects on human beings and the environment.

The benzene market is divided into the following segments:

Based on derivatives, the market has the following subtypes:

Based on the applications, the market has the following subcategories:

Based on the region, the market has the following types:


In 2018, Asia Pacific registered the highest CAGR due to the increase in demand for oil and natural gas, construction, and the polymer industries. China holds the top rank in producing and consuming Benzene with a CAGR of 7.8% during the forecast period. This is because of the increase in the living standards in the region and increased demand for plastics in the automotive industries. Also, polyurethane foams in the beddings have increased, leading to the higher consumption of benzene in the region.

North America holds the second rank in the market with the increased demand in the oil and gas industry. This increased demand has widened the horizons in petrochemical products, and the demand for benzene in the manufacturing of rubber and lubricant applications has increased many folds. The US dominates the region with major manufacturers of the market like Exxon Mobil Corporation and Dow.

Europe is likely to register moderate growth due to stringent laws in the region. Germany dominates the benzene analyzer market in the region due to some major automotive manufacturers like BMW, Volkswagen, Mercedes-Benz, and many more.

The Middle East and Africa are expected to register significant growth by 2025.

The major benzene producers in the market are as follows:

All the major benzene producers in the market have been working as a team towards developing the market. They have focused on bringing the revolution in the benzene products market by introducing the latest technologies regularly. Also, they have been looking forward to ensuring that the effects it produces on the health of humans and the environment can either be removed completely or at least can be reduced. The mergers, acquisitions, and collaborations have been proving to be quite beneficial for the entire market.

Recent advancements in the market are as follows:

What is the projected CAGR of the benzene market in the forecast period?

The Benzene market is expected to grow at a CAGR of 3.4% during the forecast period.

Which region is expecting to dominate the Benzene market?

The Asia Pacific is expected to dominate the benzene market during the forecast period.

Mention the names of the key players in the Benzene market?

What are the strategies implemented by the major players in the benzene market for growth?

Mergers, geographical expansions, mergers, and collaborations among themselves are among the few major strategies implemented b the major players in the benzene market.

What is the major restraint in the growth of the benzene market?

The ill effects it produces on human health and the environment are the major factors that hamper the market’s growth.