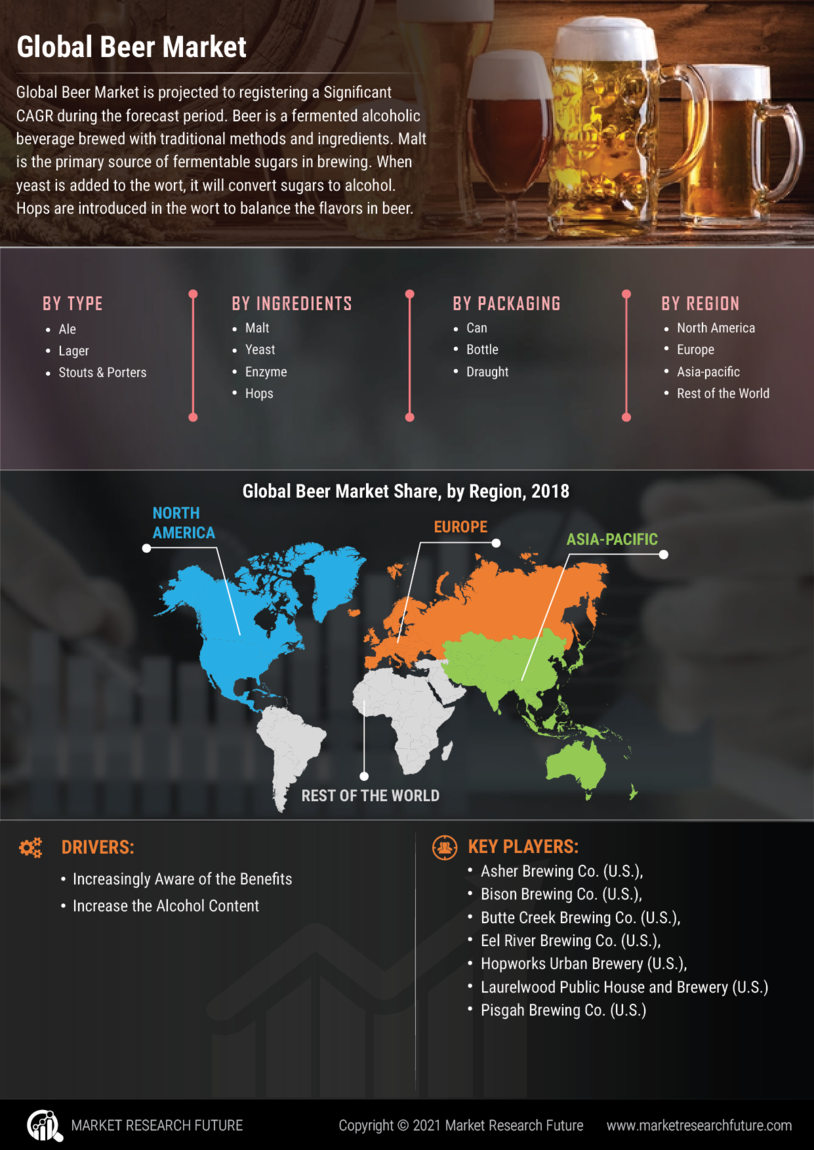 Over the past decade, the changes in people’s lifestyles, rapid urbanization, surge in disposable incomes, and the widespread popularity of different types of beer among the youth favor the worldwide market.  Inclusion of new and innovative ingredients as well as flavors, which combines fruity, tart and salty properties in beers enhances their appeal among millennials. Craft beer’s huge popularity and the heightened inclination towards flavored beers among consumers, could translate into considerable business growth.

The trend of local beers has given rise to the number of breweries, which could be a lucrative opportunity for the top developers in the market. But, since alcoholic beverages are known for their health concerning and addictive nature when taken in excess, their demand takes a hit. The prevalence of alcohol addiction worldwide has emerged as a huge concern for the government bodies in various nations. Consequently, governments everywhere are imposing strict regulations and rules regarding the sales as well as distribution of beer. This could have a negative influence on the global industry in the long run.

With the persistent surge in the demand for low alcohol by volume beverages, the sales have risen considerably among health-conscious consumers. In view of this, brands are introducing extensive new lines of low alcohol beers with better taste. Another reason for the mounting preference for low-alcohol beers could be their higher affordability compared to their high alcoholic counterparts. This scenario is extremely prevalent in European nations like Sweden, where brewers are constantly developing low alcohol beers, with the aim to leverage the attractive opportunities.

Like other marketing sectors, the global Beer Market had also got affected due to the global pandemic. The global lockdown and social distancing norms have impacted the beer industry, and it has increased the price of beer products. Hence, the increased prices of global beer products have disrupted the supply chain of the organic beer industry.

However, the Beer Industry key players and manufacturers have adopted supportive strategies to thrive in the global market.

Beer Market is continuously driving its growth due to various reasons like high demographic and economic growth rate, less structural rigidities, and the free market structure. Moreover, the beer demands are increasing across the world day by day due to the willingness to purchase healthy goods and increasing consumer awareness for the beer product.

Opportunities for the Global Market

Hence, this increasing purchasing behavior of the consumers has brought more opportunities to the key players and beer industrialists.

The global Market might face restraints due to the increasing prices of beer products, raw materials costs, and limited availability of raw materials.

Another restraint for the global Market was COVID-19. This pandemic has stopped all productive activities. Hence, the manufacturers are focusing on these issues.

Challenges for the Global Market

The global Beer Market might face challenges due to the raw material shortage, labor shortages, and closure of bars or restaurants.

The global beer product demand is fueling across various regions because of the introduction of different varieties of beer products and new developments of products.

The global market report mentions that the key players are applying branding and promotional strategies to increase the sales of the global beer product, which is very supportive of the growth of the Beer Market.

The global Beer Market is classified into stouts and porters, ale, lager, and others based on the type segment.

Among these type segments, the ale beer type segment is expected to increase the higher CAGR for the forecast period due to the increasing demand for innovative beer. On the other hand, the lager beer segment is generating the largest beer industry size for the review period.

The global Beer Market is divided into enzymes, hops, malt, yeast, and others based on the ingredient segment.

The global Beer Market is classified into three such as draught, can, and bottle, based on the packaging segment.

Based on the geographical classifications, the global Market is classified into different locations such as Asia-Pacific, North America, Europe, and the Rest of the World. Out of all the regions, the North American region is estimated to dominate the United States beer industry share for the assessment period and has aimed to grow its business in all the remote parts of the region.

Moreover, the Asia-Pacific region is considered to be the fastest-growing region for the beer secondary market. In this region, the countries like India, China, and Japan are performing well due to their emerging economies at a higher growth. These Asian countries have an exponential growth rate in the upcoming years. Along with that, the Latin American regions are bringing more opportunities for the key players and trying to expand their business. Further, Latin America and Asia-Pacific are increasing the consumption of alcoholic beverages with their growing economies. Especially, the regions like India and China are having more demands for beer, which is expected to grow the global market in the upcoming years.

The global beer market has many competitions among the key players. Hence, some of the top major key players or beer market company are playing well in the global market. These players are:


The above-mentioned key players belong to the U.S country. And these key players are growing the demands for the beer industry due to their better infrastructure and facilities. Hence, the global market is predicting to increase US beer industry size for the research period.

Molson Coors will be launching its European lager Madrí Excepcional in popular grocery stores starting from March 2022. The launch is backed by a million-pound funding for brand promotion on TV, out-of-home, digital activity, and video-on-demand, along with high-profile partnerships as well as activations.

The global beer secondary market report is based on extensive primary research. This report has given the focus on the quantitative and qualitative aspects to perform the detailed analysis of the beer market research. Here, the report has given a deeper explanation of the global beer market performance and beer industry performance across the world. For this, the report has included various key opinion leaders and industry experts to get detailed insights into the global market.

Which are the major segments in the Global Beer Industry?

Based on type, the Ale segment, based on ingredients, the hope segment, and based on packaging, the can segment holds majority shares in the Global Beer Market.

What are the major tailwinds pushing the growth of the global beer industry?

The willingness to purchase healthy goods and Increasing consumer awareness for the beer product are major tailwinds pushing the growth of the global beer industry.

Which region holds the largest share in the global market for beer?

North America holds the largest share in the global beer market, followed by Europe and the Asia Pacific, respectively.

Who are the top players in the global beer industry?

What are the key growth strategies of players operating in the global beer market?

Strategic initiatives such as mergers & acquisitions, collaborations, expansion, and technology/ product launch are some of the growth strategies that players operating in the global beer market adopt to gain a larger competitive advantage.