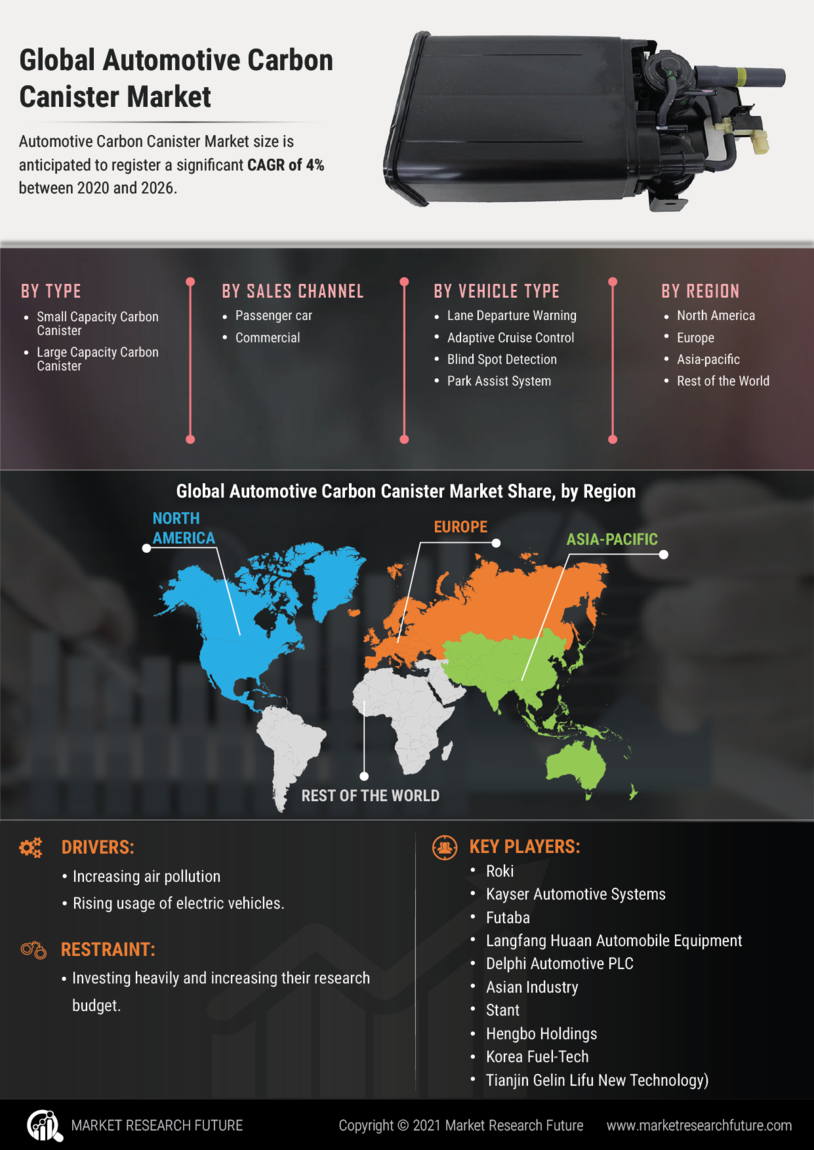 Automotive Carbon Canister Market size is anticipated to register a significant CAGR of 4% between 2020 and 2026.

The Carbon Canister is an automotive component of the evaporative emission control system (EVAP) that is attached to the fuel tank. This device is used to capture and store the fuel vapor emission from the fuel tank when the vehicle is at a halt. When the engine starts running, the stored fuel hydrocarbons are used for combustion after the filtration process in the canister. The carbon in the canister absorbs the contaminated particles from the fuel and purifies the fuel for use.

Carbon Canisters are devices found in automobiles designed to decrease the amount of air pollution the vehicle creates while at the same time increasing its fuel efficiency. Even when the vehicle's engine is turned off, hydrocarbons are produced. This occurs in the form of fuel vapor rising in the fuel tank. Carbon Canisters trap that vapors rather than allow it to escape the fuel tank, feeding it back into the engine. Carbon Canisters are rectangular-shaped boxes that sit apart from the fuel tank next to the throttle in most vehicles. There is an input port and an output port, with the two ports side by side. There are three chambers inside the canister, running in sequence from the intake to the outtake. The interior of the canister is filled with charcoal or carbon pellets. The input of the canister connects to the gas tank's vent port, while the output connects to the purge valve in the side of the vehicle's intake manifold.

When the vehicle is shut off, there is a pressure imbalance within the fuel tank caused by fuel being siphoned out, but no air being let back in to take up the empty space. The lower pressure in the gas tank promotes a greater rate of evaporation, letting some of the fuel become a gas. Eventually the tank's internal pressure equalizes, at which point the gas leaves the tank through the vent port and goes into the carbon canister. It is trapped there by the properties of the carbon within the canister, keeping it from escaping into the air. When the vehicle's engine starts, the sudden suction created along the intake manifold opens the purge valve and pulls all the gaseous fuel out of the canister and burns it in the engine. The canister goes unused until the car is turned off again.

Rapid industrialization and urbanization are set to surge people’s disposable income across the globe. It would increase the number of vehicles, thereby propelling the automotive carbon canister market growth in the upcoming years. The high emission of carbon dioxide from vehicles, coupled with the increasing air pollution is set to accelerate the demand for automotive carbon canisters. These canisters can easily help to reduce air pollution by lowering fuel emission. Apart from that, governments of several countries worldwide are implementing strict norms to reduce vehicular emissions. At the same time, multiple environment control organizations and transportation ministries are setting up limits for vehicular emissions. However, the rising usage of electric vehicles may obstruct growth. Moreover, the whole world is facing an unprecedented challenge of the COVID-19 pandemic. Several industries have shut down their manufacturing facilities and have shifted towards the production of hand sanitizers, PPE kits, and masks to cater to high demand from front-line workers, as well as common people. This would hamper the overall market growth and will help to focus on the right areas for investments. 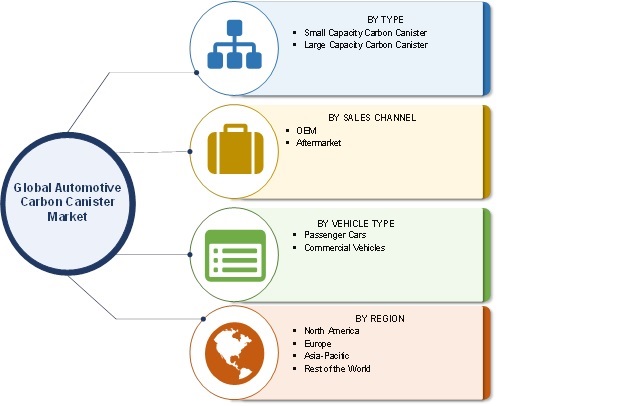 Based on Region, the global Automotive Carbon Canister market has been segmented into North America, Europe, Asia-Pacific, and the rest of the world. Asia Pacific is anticipated to hold the highest automotive carbon canister market share throughout the forthcoming years. This growth is attributable to the presence of several OEMs in China and India. Besides, increasing population and industrialization in the region is expected to boost the production and sales of passenger cars. In Europe, the market would grow significantly because of the implementation of strict rules for lowering emissions in the atmosphere.

At what CAGR is the Automotive Carbon Canister market predicted to grow during the forecast period?

Automotive Carbon Canister market is predicted to grow at 4% through forecast period of 2020-2027.

What is the forecast period of Automotive Carbon Canister market research report?

Which region will lead the global Automotive Carbon Canister market?