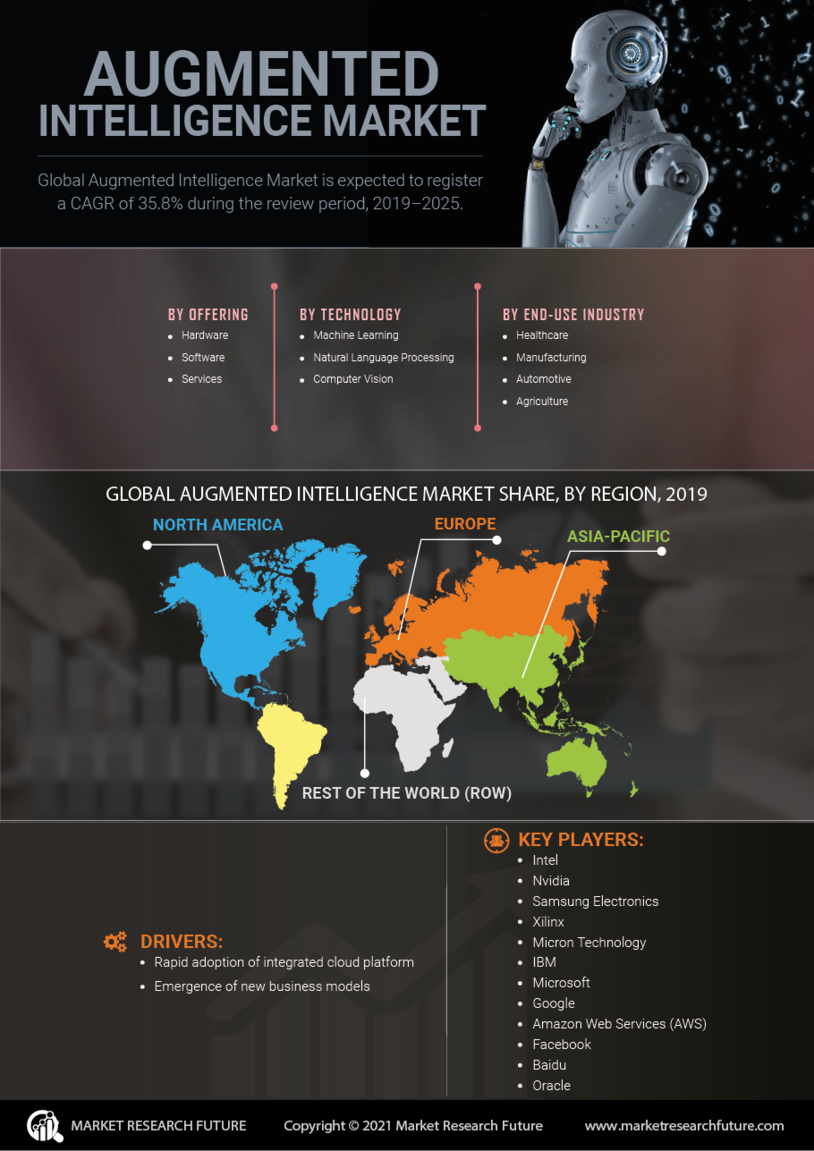 Augmented Intelligence Market Overview:According to the latest research report, The Global Augmented Intelligence Market size is projected to grow at a compound annual growth rate of CAGR of 35.8 percent during the forecast period of 2019–2025. Augmented intelligence is an alternate view of a.i. that emphasizes the helpful function of ai technology, stressing the fact that cognition technologies are intended to complement instead of supplanting human intellect. When machine learning and supervised learning algorithms are used to find connections and solve issues, enhanced intelligence emphasizes the importance that human intelligence performs in the discovery and solution of problems.

Enhanced intelligence would be described as the connection between a technology and a person that allows for the production of efficient and productive results in the future. When it comes to financial organizations, augmented intelligence will be essential since this living beings pairing will allow them to make more effective business choices, resulting in improved engagement between their workers and consumers. A similar improvement in operational efficiency is required by the healthcare sector when interacting with patients; therefore, increased intelligence would allow them to expand their conventional settings. A substantial increase in the need for analyzing large quantities of unstructured information among businesses is anticipated to drive significant growth in the worldwide augmented intelligence market throughout the forecast period. The rising R&D expenditures by major companies in order to embrace augmented intelligence solutions are also anticipated to have an impact on the development of the global augmented intelligence market in the future. Furthermore, it is expected that businesses would engage in acquisitions and mergers in order to make the best possible use of technologies in the interests of their company.

This report contains all the information on the global Augmented Intelligence Market analysis and its strengths. The report also contains the culmination of dynamics, segmentation, key players, regional analysis, and other important factors. And a detailed analysis of the global Augmented Intelligence Market forecast for 2025 is also included in the report.

Covid 19 Analysis:The augmented intelligence market is expected to grow in the COVID-19 environment as a result of the adoption of a work-from-home culture by different government, municipal, and private companies, as well as other organizations. In furthermore, many information technologies and telecommunications sectors are using augmented intelligence solutions in order to reduce the loss incurred as a result of the pandemic scenario and to increase its market share. Throughout this pandemic scenario, augmented intelligence offers many advantages to different sectors, including raising corporate governance standards and boosting the quality of the employees. Furthermore, COVID-19 generated a sudden demand for working remotely in the sector, and as a result, many businesses across the world have embraced a work-from-home culture, which is having a beneficial effect on the market's development. The increasing use of internet-based services is anticipated to fuel the development of augmented intelligence in the near future.

Market Dynamic:Drivers:The increased adoption of advanced analytics, smart contracts, machine intelligence, and the internet of things by businesses, as well as the increased use of computer media to meet the expectations of customers, are driving the expansion of the market augmented intelligence market growth in recent years. Additionally, the increase in demand for business intelligence products has a favorable effect on the market's expansion.

Cumulative Growth Analysis:Digital technologies help businesses develop faster because they enable them to reach a larger audience and establish long-lasting connections with customers, which increases brand dependability. In furthermore, technology assists companies in achieving a variety of goals, such as providing high-quality customer service while lowering operating costs and boosting revenues, all of which contribute to the expansion of the market. Furthermore, the rise in the usage of digital technologies amongst businesses that collaborate with distributors and suppliers, as well as specialized and subcontractor advisors, to produce a diverse variety of goods and services, presents a profitable potential for the marketplace.

Value Chain Analysis:According to the reports, The Global Augmented Intelligence Market is categorized depending on the offering, technology, end-use industry, and region. The offering is the most important sector in the market. The market has been divided based on what it is offering, with hardware, software, and solutions being the most common. In addition, the hardware component has been subdivided into three categories: processors, storage, and network. The AI platforms and AI solutions categories are included in the software sector. Service segments include deployment & integration, support & maintenance, as well as other specialized services. The market has been segmented into four categories based on technology: machine learning, context-aware, computer vision, and natural language processing.  Because of its capacity to handle natural language exchanges, discourse analysis is projected to acquire the highest Augmented Intelligence Market share over the projection period. It is also expected that after the natural language processing technology sector, the machine learning and computer vision segments would take their place.

Healthcare system, manufacturing, automotive, agricultural, retail, human resources, finance, and other end-use industries are among the segments of the market that have been classified according to end-use industry. Healthcare is projected to expand substantially during the projection period, followed by the business and financial services (BFSI) sector. It examines North America, Europe, the Asia-Pacific area, the Middle East and Africa, and South America, to name a few of the regions covered.

The market is segmented on the basis of offering, technology, end-use industry, and region. The global Augmented Intelligence business is expected to witness decent growth during the forecast period.

By Application:Based on the application, the market is segmented into Service segments include deployment & integration, support & maintenance.

By end-users:Based on the propulsion types, the market is segmented into Healthcare system, manufacturing, automotive, agricultural, retail, human resources, finance, and others.

Augmented Intelligence Market Regional Analysis:According to the reports, On the basis of geography, the Global Augmented Intelligence Market has been segmented into four regions: North America, Europe, Asia-Pacific, Middle East & Africa (MEA), and South America (SAC). Since North America is home to many small, medium, and big businesses of all sizes, it is anticipated that North America will have the greatest share of the worldwide augmented intelligence market sales during this projection period. Several important reasons, including the increasing implementation of sustainable cloud platforms and the development of new business models, are having an impact on the market's expansion. A growing IT network and the expansion of the industrial sector in the Asia Pacific are anticipated to propel this region to the greatest compound annual growth rate (CAGR) during the forecast period.

Competitive Landscape:Numerous provincial and municipal suppliers compete in the worldwide augmented intelligence industry, which is characterized by a high concentration of players. The worldwide augmented intelligence market is dominated by companies that provide complete solutions that integrate edge-to-enterprise analytics, deep learning, the commercial internet of things (IIoT), and augmented reality (AR) into industrial processes.

Recent Developments:Qlik announced a new collection of multi-cloud and augmented intelligence operations in May of this year. Over this, Qlik is among the few suppliers in the industry that is able to provide its technology under a singular subscription license model, which is notable.

What encouragements are generating a favorable backdrop in the augmented intelligence market?

The growing demand for analyzing enormous volumes of unstructured data in the organizations is expected to provide the market with an advantage.

Who are the firms opposing each other in the global augmented intelligence market?

What CAGR is projected to be produced in the augmented intelligence market?

A 35.8% CAGR is expected to fuel the growth of the market in the forecast period.

What is the revenue grossing potential for the augmented intelligence market?

The market is expected to accomplish a lucrative income level in the forecast period.

What regions are taking charge of the augmented intelligence market globally?

The rapid adoption of the integrated cloud platform is estimated to induce promising growth in the position of the North American region.

Augmented Intelligence Market is Expected to Register a CAGR of 35.8% During the Review Period, 2...