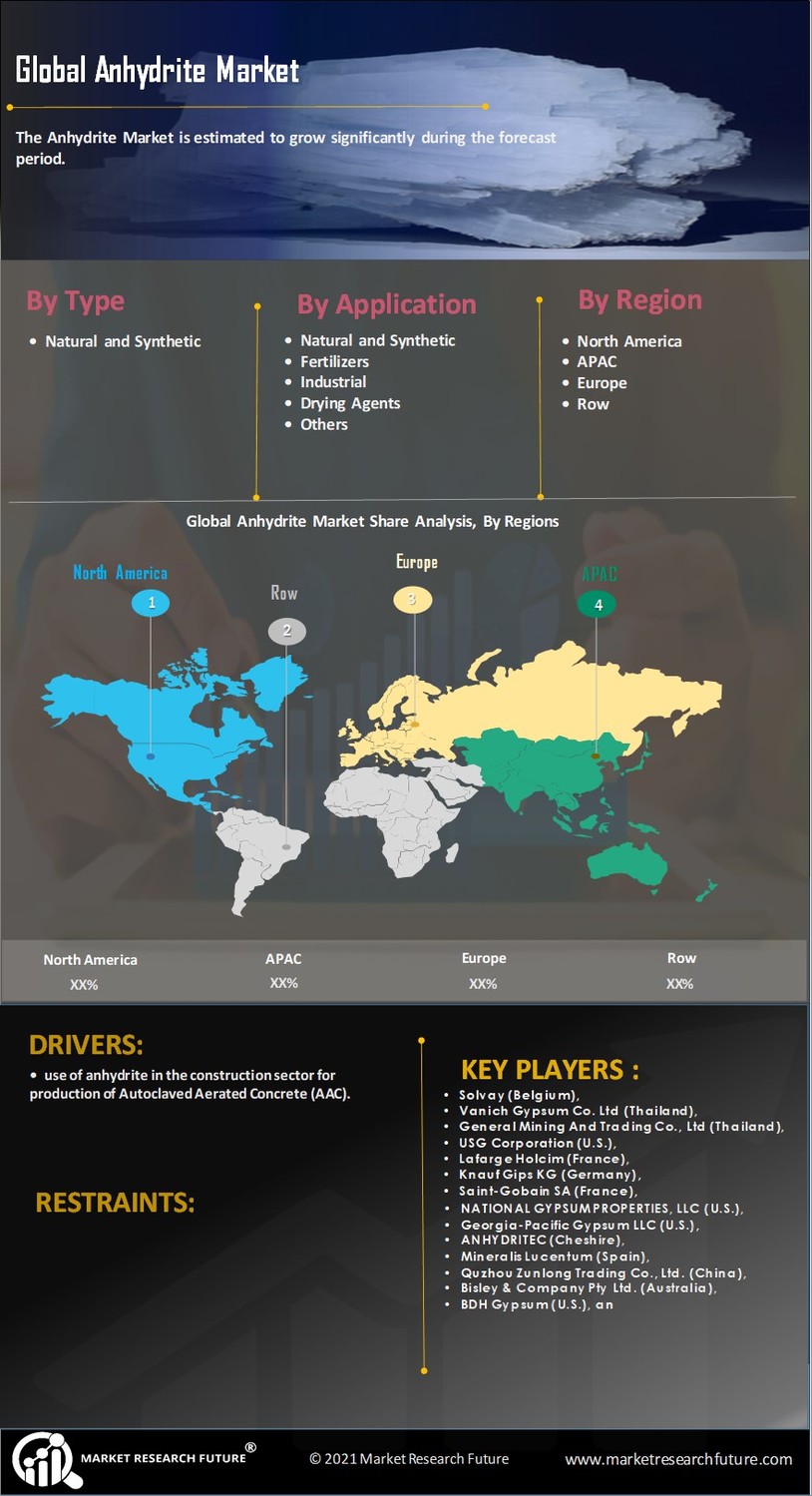 Anhydrite is anhydrous calcium sulfate, which occurs in extensive layered deposits in sedimentary basins. The evaporite deposits of halite, gypsum, and limestone in thick accumulations consist of anhydrite.

Anhydrite is used in various applications such as soil treatment, construction, fertilizers, industrial, drying agents, and others. The soil treatment application segment is driving the global market due to its higher solubility and calcium content, which is highly useful for maintaining the fertility of the soil. The lack of arable land and the rising demand for soil treatment for cultivation and agriculture purposes are likely to propel the market growth. Some of the government initiatives pertinent to soil conservation are expected to influence the market demand positively. For instance, Resource Conservation and Recovery Act by the U.S. Environmental Protection Agency has created a framework for the proper management of hazardous and non-hazardous solid waste, which is likely to propel the demand for anhydrite for soil treatment. Anhydrite is a potential replacement of gypsum because of these properties. It is used to neutralize the polluted soil to prevent pollution, which is another major factor inspiring use of anhydrite instead of gypsum. The use of anhydrite in the construction sector for production of Autoclaved Aerated Concrete (AAC) is another major driver of the global market and is expected to fuel the growth further in coming years. This growth can be attributed to the growing infrastructure and construction activities across the globe coupled with high disposable income. Anhydrite is also listed as a fertilizer and enriches the calcium and sulfate minerals level when used, which is another factor influencing the market growth positively. The lack of arable land and the demand for increased food productivity is expected to fuel the product use in agrochemicals industry. It is also used as a drying agent in plaster, paint, and varnish, which is projected to fuel the market growth further. Moreover, anhydrite meets the specifications of the Food Chemicals Codex under the Food and Drug Administration and can be used in food items up to certain limitations, thereby, offering considerable opportunities in the food & beverage industries over the forecast period. Some of the key development trends observed in the market include acquisitions, mergers, and others. For instance, in July 2017, ACG Materials has acquired Kelly Limestone, LLC, a leading manufacturer of limestone, gypsum, and dolomite products. 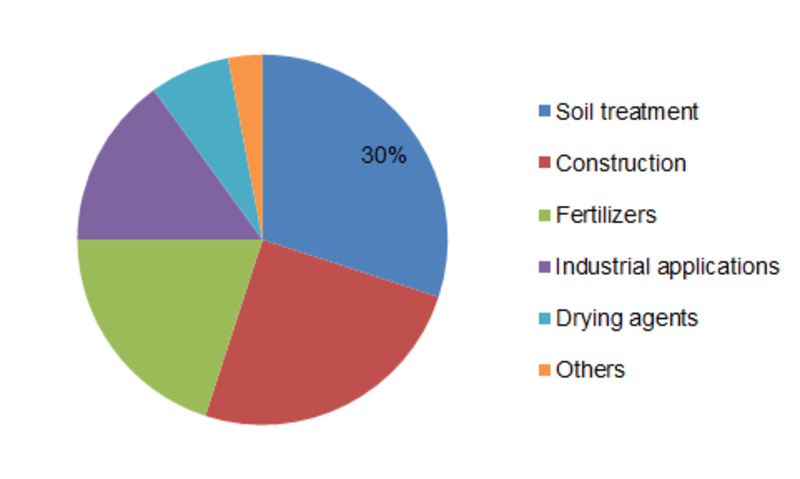 Anhydrite market is spanned across five regions: Asia Pacific, North America, Europe, Latin America, and the Middle East & Africa. Among these, Asia Pacific was the largest region in the global anhydrite market in 2016 on account of the rapidly growing urbanization and industrialization in countries such as China, India, and others. Moreover, the demand for the product is rising for soil treatment, and fertilizer owing to the major agricultural countries present in this region. Countries such as Indonesia, South Korea, and Thailand are also significant exporters of fertilizers.

North America was the second largest region in the global anhydrite market in 2016 due to the growing use of fertilizers in the U.S. for crop production. The reviving construction sector in this region is another major factor influencing the market growth positively.

Europe is likely to witness a considerable growth on account of the growing demand for concrete from the building & construction sector in Western European countries.

Brazil and Argentina are the major exporters of fertilizers, thereby, driving the regional market of North America.

The infrastructural hub present in the GCC countries is expected to drive the demand for anhydrite over the assessment period in the Middle East region.

November 2021 – ScoZinc Mining Ltd. happily announced the establishment of a non-binding gypsum offtake agreement with a Nova Scotian end buyer for the life of mine supply of Gypsum from its permitted and 100% owned Scotia Mine situated in Nova Scotia, Canada.

Mr. Mark Haywood, ScoZinc's CEO and President stated that the company is happy to bag a third and significant revenue stream opportunity for its Scotia Mine, which will be integrated into its future Pre-Feasibility Study update. As stated in the news release of March 22, 2021, the addition of a Gypsum revenue stream is likely to enhance the previously strong economics of the Scotia Mine as defined by the company's 2020 Pre-Feasibility Study released on July 7, 2020.

Gypsum is a soft sulfate mineral comprised of calcium sulfate dihydrate and is a type of evaporite mineral usually found in encrusted sedimentary deposits and dolomite, calcite, sulfur, anhydrite, and halite. The primary uses include the production of wallboard, soil conditioning, plaster of Paris, drywall cement, and a hardening retardant in Portland cement.

What is the biggest driver of the global anhydrite market?

Cultivation of crops and the booming agriculture sector are two of the biggest drivers of the global anhydrite market.

Which is the best-performing region of the global anhydrite market?

The APAC is the largest region of the global anhydrite market due to rapid industrialization and urbanization.

Which is the second-best region for the global anhydrite market?

North America is the second-best region for the global anhydrite market owing to the growing use of fertilizers.

Who are the biggest players of the global anhydrite market?

What are the strategies of players in the global anhydrite market?

Mergers and acquisitions are the biggest strategy followed by the global anhydrite market.