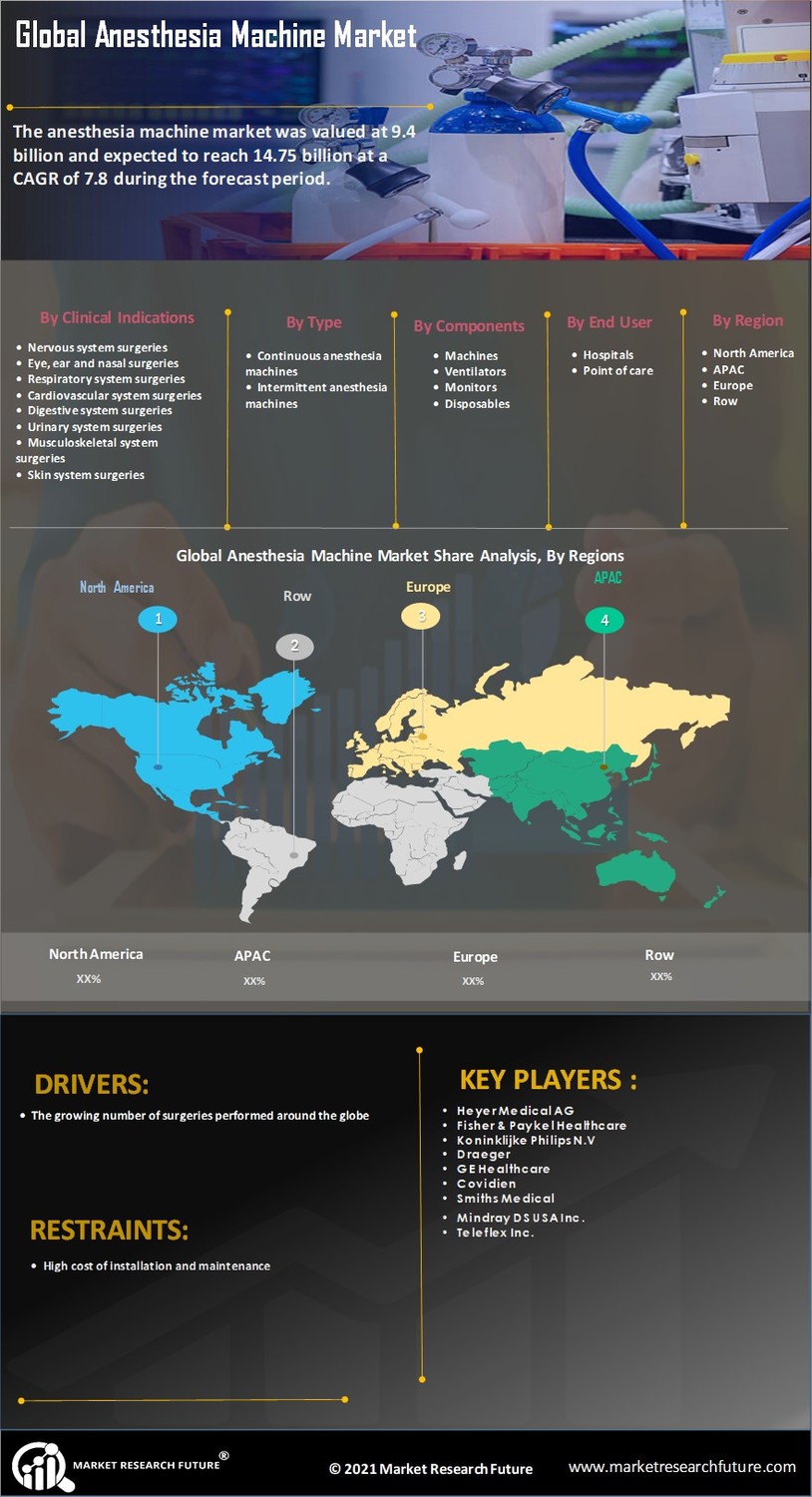 An anesthesia machine is a medical equipment that mixes gases to transport them to the patient's respiratory system and maintain anesthesia. These devices' primary functions are to ventilate patients and supply oxygen.

One of the key factors driving the growth and demand of the anesthesia machine market is the expanding capabilities of the anesthetic machine, such as the ability to deliver variable flow, minimum low flow rate, scavenging systems to capture waste gases, emergency systems such as oxygen flush systems, and others. Additionally, the frequency of chronic diseases is increasing, the population is aging, and technology is advancing, boosting the market growth.

According to GLOBOCON 2020, 612,390 fatalities and 2,281,658 new cancer cases were reported in the United States in 2020. The increasing incidence of cancer cases requires more cancer-related procedures. This also contributes to the region's growth opportunity for the anesthetic machine market, as anesthesia is essential to cancer care.

The COVID-19 pandemic could not hamper the demand for anesthesia machines as crucial medical devices, systems like ventilators, and anesthesia became the need of the hour. The timing of surgery after a COVID-19 diagnosis is vital for taking postoperative complications into account. Due to the worldwide increase in coronavirus incidence, all ICU ventilators and anesthetic equipment were needed to provide longer-term ventilation for critically sick patients.

North America commands the most significant share of the market due to a large number of surgeries and sizeable public expenditure on healthcare. The U.S. spends a substantial proportion of the GDP on healthcare, of which approximately 16 % in 2016. However, the recent reimbursement cuts by the government of U.S. may hinder the anesthesia machine market.

Europe market is dominated by Germany, France, and the U.K. Owing to the extensive medical device industry of Germany. Poland, Spain, and Italy also have a sizable market share of the European market.

Asia Pacific region is expected to demonstrate the fastest growth for the anesthesia machine market is owing to economic development and developing healthcare infrastructure. China is expected to drive a considerable growth followed by India. The leading domestic players, in China, are Tuoren Medical, Shengguang Medical, and Qiangjian Medical, which account for approximately 16 % of the local anesthesia machine market share of China.

The Middle East and Africa are led by Gulf economies of Saudi Arabia, UAE, Kuwait, and Qatar. The Middle East is a market to watch owing to its high wealth and the development of large hospital complexes in the region such as the King Fahd hospital, Riyadh. The market is however dependent on petrodollar and the expat population, which is a threat to its stability. The kingdom of Saudi Arabia reduced its healthcare spending by 35 percent in the year 2016 to wean the downfall of revenues owing to falling crude oil prices. Saudi Arabia and other Gulf nations spend approximately 75 % of total healthcare expenditure through public budgets which must be seen as a threat as well as opportunity for the private players to capture the domestic market of Gulf economies.

Thus, the short-term prospects for the Middle East region are expected to rise to previous levels after 2018. The government is undertaking harsh fiscal adjustment owing to weak oil price. However, the high and satisfactory foreign reserves of Saudi Arabia, which equal over 95 % of GDP, and low public debt stock of just 5.8 % of GDP in 2015 are enough to say that the cuts will not be too drastic!

The Latin America market is characterized by poor domestic capacity and capability of production. China is expected to increase its share of the medical devices imports of Brazil, especially in low-end devices. Among the regions of Brazil, São Paulo, Minas Gerais, Bahia, Rio de Janeiro and Parana tops the healthcare expenditure list. However, the differential regional healthcare availability owing to extreme social and economic differentiation of the Brazilian population is the prime threat to the market. The inadequate health care in its vast rural areas, political turmoil, the weak Brazilian Real are the other threats to the anesthesia machine market.

What valuation mark would the anesthesia machine market touch by 2030?

The anesthesia machine market would surpass a valuation of USD 14,560.0 Million by 2030.

At what pace, the anesthesia machine market is expecting growth during the forecast period of 2022-2030?

The anesthesia machine market can mark its growth with a CAGR of 9.20% during the forecast period of 2022-2030.

What are the prime restraining factors for the anesthesia machine market?

Major factors like lack of anesthesiologists, high installation cost and maintenance charge, complications like pain, risk of infection, and deaths due to overdose can adversely impact the anesthesia machine market growth.

Name the major players involved in the anesthesia machine market.

Which region is the leading anesthesia machine market?

The market in North America has a global lead for the anesthesia machine market.