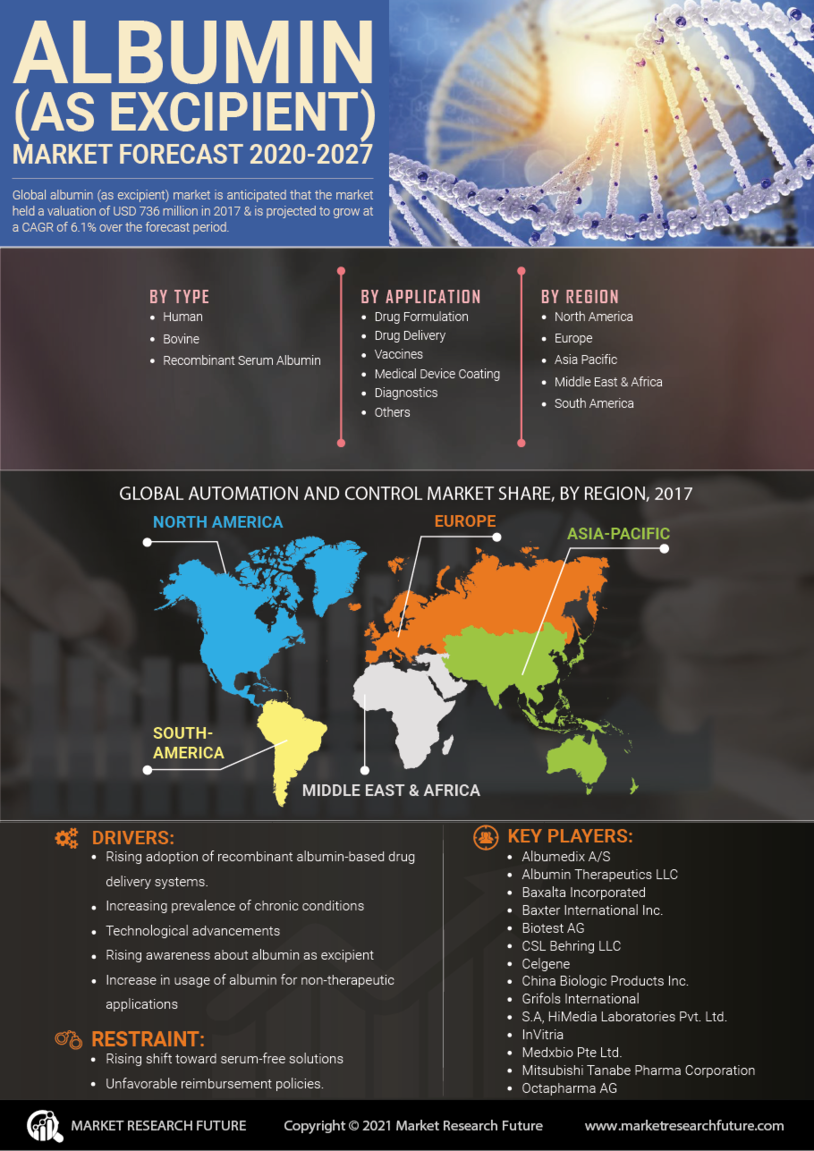 Albumin (as Excipient) Market is expected to grow USD 1,028.31 Million at CAGR of 5.80% during the forecast period 2022-2030. According to the latest research report, the albumin market size is predicted to increase at a high rate over the projected timeframe. With regard to the preparation of medications, the selection of excipient is critical for success. Albumin used as an excipient in preparation has been shown to enhance lyophilized cake form, melting characteristics of active pharmaceutical ingredient (API) from lyophilized granules, and mobility of the drug substance.

One of the essential reasons propelling the albumin market is biotechnology and pharmaceutical businesses' increasing usage of transgenic albumin-based drug carriers. A recent announcement by Novozymes Biopharma DK A/S said that their albumin-based VELTIS innovation is being utilized by GlaxoSmithKline plc inside the production of type II diabetic drugs in Europe. Multiple factors, including the growing incidence of chronic diseases, technological innovations, the emergence of new markets in APAC and the Rest of the World, increased consciousness about Albumin as an excipient, as well as the rising use of Albumin for non-therapeutic implementations, is indeed anticipated to contribute to the market's continued expansion.

Since Albumin is extensively utilized in R&D, the COVID-19 pandemic is predicted to have a beneficial effect on the market. The production of secure and stable compositions in pharmacological drug discovery is a problem, and the selection of excipients may play a crucial role in their success. In addition, Albumin has certain advantages over many other active ingredients in the separation of different APIs and may assist in the resolution of specific formulation issues. Albumin.

Hypoalbuminemia is becoming more common due to an increase in the incidence of life-threatening ailments and disorders, including liver injury, viruses, and heart surgery. Additionally, the increased acceptance of albumin products, development in albumin products used for non-therapeutic applications across various regions, and heightened recognition of recombinant Albumin are all contributing to the market's expansion and expansion.

On the other hand, the advancement of cost-effective therapies, as well as large-scale albumin manufacturing and the strong probability of unexplored markets in developing nations, are projected to present attractive growth albumin market growth.

Although there have been no reported adverse effects linked with Albumin, the growing trend for serum-free treatments, as well as restrictive reimbursement regulations, the albumin market is expected to continue to develop during the projection period.

However, obstacles such as tight regulatory requirements and the post-operative dangers involved with albumin-based treatment are preventing the industry from expanding.

Increased public knowledge of the advantages of Albumin is driving up demand for protein in labs everywhere. It functions as a pharmaceutical stabilizer, reducing the conformational changes of the protein active components in the final product. On the other hand, human serum albumin has a number of advantages that make it a good candidate for use in vaccine formulations. Advances in protein precipitation and molecular extraction technologies are expected to provide a considerable boost to the industry in the coming years. The market under consideration is predicted to increase as a result of the above causes, as previously stated.

According to the reports, On the basis of type, application, end-user, and geographic area, the albumin market is segmented. According to type, the albumin market is divided into three segments: bovine serum albumin, human serum albumin, and recombinant Albumin (recombinant Albumin). Because of the rising number of chronic problems such as infectious diseases, cardiac disorders, and other ailments, the human serum albumin America is projected to account for the highest share of the industry in the future.

The market is categorized based on application into the following categories: in vitro fertilization, medical device coating, drug formulation, vaccines, drug delivery, culture medium & stabilizers, diagnostics, and other applications. The academic and research organizations, pharmaceutical and biotechnology sector, and others are the end-users that are classified in the market based on their end-use.

The albumin market is segmented on the basis of the type, application, end-user, and geographic area. The global albumin market trends are expected to witness decent growth during the forecast period.

Based on the Application, the market is segmented into in vitro fertilization, medical device coating, drug formulation, vaccines, drug delivery, culture medium & stabilizers, diagnostics, and others.

The albumin market is segmented into academic and research organizations, the pharmaceutical and biotechnology sector, and others based on the propulsion types.

According to the reports, on the basis of region, the global albumin market is divided into the Americas, Europe, Asia Pacific, the middle east, and Africa. The expanding R&D spending and expanding incidence of diabetes in the Americas fueled the worldwide market for Albumin. According to Centers for Disease Control and Prevention (CDC) statistics from 2015, around 30.3 million Americans have diabetes. Europe was predicted to be the second-largest market for Albumin in the year 2017. Technology developments and more market engagement are to blame for this. As an example, Novozymes founded Albumedix, a newly established firm in 2016, which specializes in recombinant Albumin.

It was predicted that the Asia-Pacific area would be the quickest growing in the year 2017. An increase in medical spending drives the Asia Pacific region's regional marketplaces. According to the Australian Institute of Health and Welfare, there was an overall health investment of USD 181 billion from 2015 to 2016. Although Albumin was most popular in Europe and North America, the Middle East and Africa accounted for the lowest percentage of the total albumin market share.

The albumin industry is dynamic, with a large number of prominent firms competing for customers' attention. When it comes to market share, just a handful of the large competitors are now controlling the industry. Also, with the growing need for improved healthcare services and the increased frequency of illnesses, it is projected that a few new smaller firms would join the marketplace.

Albumin (as Excipient) Market, by Type


Albumin (as Excipient) Market, by Application

What is the valuation of the albumin market?

What is the albumin market’s growth rate?

What are the key players in the global albumin market?

What is the key restraint on the market?

The risk of adverse reactions to albumin and the rising demand for serum-free solutions are the key restraints on the global albumin market.

The increasing use of recombinant albumin in drug delivery systems is likely to be the major driver for the albumin market over the forecast period.