Please note that the assessment period of report has been updated from 2014-2022 to 2020-2027. Cordially fill the sample form for updated data.

Global Market for Adhesive Tapes in terms of value is estimated to register a 5.2% CAGR during the forecast period.

Adhesive tapes refer to several combinations of backing materials coated with adhesive films that are used to bond objects together instead of mechanical fasteners, screws, or welding. Adhesive tapes find widespread applications in numerous end-use industries that include the automotive, electronics & electrical, medical, construction, paper, and printing industries. The increasing product demand from these industries and their healthy growth is boosting the growth of the global market during the forecast period. Furthermore, socio-economic developments such as an increase in middle-class population and rising per capita disposable income, especially in developing countries such as China and India, are driving the growth of the global market.

Growth in the product demand from the automotive industry and increased healthcare spending will spur market growth. The global adhesive tapes market has been segmented based on backing material, type, resin, application, and region.

Based on backing material, the global adhesive tapes market has been segmented into polypropylene (PP), paper, polyvinyl chloride (PVC), and others. In terms of value, the paper segment dominated the global market with a 43.1% share in 2019 and is likely to register a 4.6% CAGR during the review period.

Based on resin, the adhesive tapes market has been divided into acrylic, epoxy, rubber-based, silicone, and others. The acrylic segment accounted for the largest share of 36.9% in 2019 due to the extensive properties offered by acrylic resins and wide applicability in the end-use industries.

Based on application, the global market has been divided into automotive, healthcare, packaging, electrical & electronics, building & construction, retail, and others. The packaging segment accounted for the largest share of 26.4% in 2019, owing to the increased demand from the e-commerce sector.

By region, the adhesive tapes market is segmented into North America, Europe, Asia-Pacific, South America, and the Middle East & Africa. 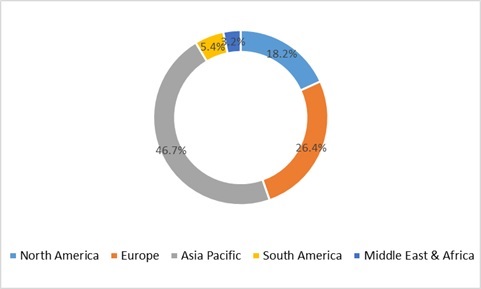 Asia-Pacific is one of the prominent regions in the adhesive tapes market due to the increasing export from countries in the region. Asia-Pacific includes China, India, Australia, New Zealand, and Japan, which are the leading exporters of various types of commercial goods across the world. The growing retail industry in these countries is further supporting the growth of the market in this region as it is a flourishing market for manufacturers offering technologically advanced packaging solutions for the retail and food and beverage industries. The FDI in retail has further widened the scope of packaging, which attracts foreign players to set-up base in the region.

The growth of the adhesive tape market in the region is backed by the increasing demand for packaged food and beverage items in countries, such as China and India, due to the increasing per capita disposable income. Additionally, the advancement in technology and increasing manufacturing units associated with various industries, such as electronics, automotive, energy, food & beverages, and construction, are increasing the demand for adhesive tapes due to their capability to withstand different temperature conditions, high tensile strength, and elimination of the need for fasteners, screws, or welding on a system.

Global Adhesive Tapes Market has been segmented based on Backing Material, Type, Resin, Application, and Region. Growth in demand from the automotive industry and increased healthcare spending will spur market growth.

Global Adhesive Tapes Market is highly fragmented with the presence of a high number of market players. The adhesive tapes market has significant scope for improvement in the coming years. The manufacturers/service providers are operating at the regional level. The players are adopting strategies such as mergers & acquisitions, product developments, partnerships, joint ventures, and expansions to improve their positions in the market, both regionally and globally. High competition, rapid technological changes, and integrated solutions by industry participants are the key factors that affect market growth. The growth of market vendors depends on market conditions, government support, and industry development. Thus, they should focus on improving their products, expanding their regional presence, and offering various adhesive tapes to suit the requirements of the projects. 3M, Avery Dennison Corporation, H.B. Fuller Company, Henkel AG & Co. KGaA, Nitto Denko Corporation, Tesa SE, PPM Industries, and other players are some of the leading players, holding an 18.3% market share.

What are the major materials used in the adhesive tapes market?

What is the CAGR of the adhesive tapes market?

Global adhesive tapes market is expected to exhibit a strong 5.2% CAGR over the forecast period till 2022.

What is the major driver for the adhesive tapes market?

The growing healthcare and packaging industries are the major driver for the adhesive tapes market.

What is the leading regional adhesive tapes market?

Asia Pacific is expected to exhibit the highest growth over the forecast period.

What are the key players in the adhesive tapes market?

Leading players in the adhesive tapes market include 3M, Avery Dennison, and Tesa SE, among others.

Adhesive Tapes Market Is Expected To Showcase Rampant Growth Over 2027