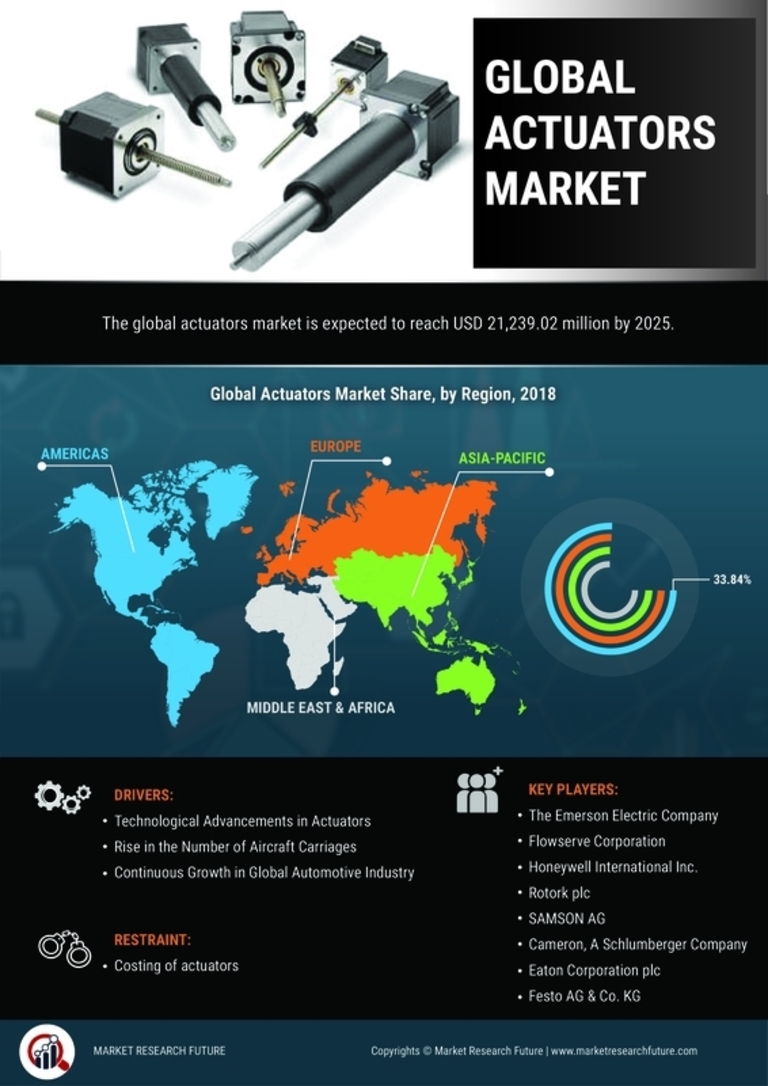 Actuators market is anticipated to grow at 5.23% CAGR during the forecast period.

The global market of actuators is majorly driven by the factors such as a rise in the number of aircraft carriers, continuous growth in the global automotive industry, and technological advancements in actuators is propelling the market growth. Also, the growing industrial base in Asia Pacific region has a positive influence on the growth of the market. The market may witness hindrances in growth due to costing of the actuators. Also, power consumption, noise, and leaks are the major challenges faced by the actuators in current market.

The global actuators market is segmented into the prominent regions of Americas, Europe, Asia Pacific and Middle East & Africa. Asia Pacific region have the huge potential for the market. The region is also expected to drive global IoT growth over the next 5 years. IoT has been an area of focus in emerging economies, such as India and China. This includes the establishment of smart cities, IoT-specific centers of excellence, which simultaneously are expected to propel the demand for actuators. The Asia Pacific market is also projected to grow at the highest CAGR OF 5.93% during the forecast period. Americas is one of the major regions for the actuators. America’s market holds an enormous potential of growth in the near future. Increasing investments across life sciences, automotive, food processing and packaging segments to revive growth. Hence, America’s market is expected to grow at a CAGR of 5.21%. Europe is one of the major region for electric two-wheeler and has achieved an ample scope due to the presence of profitable countries such as Germany, U.K, and Norway. Additionally, the region is the hub of major are automobile manufacturers such as Audi, BMW, and Volvo among others. This also has the positive influence on the growth of the market. According to ITA Pharmaceuticals Top Markets Report, 2016, countries such as Belgium, Switzerland, United Kingdom, Germany, and Austria are expected to rank as one the leading pharmaceutical exporter in 2016-2017. 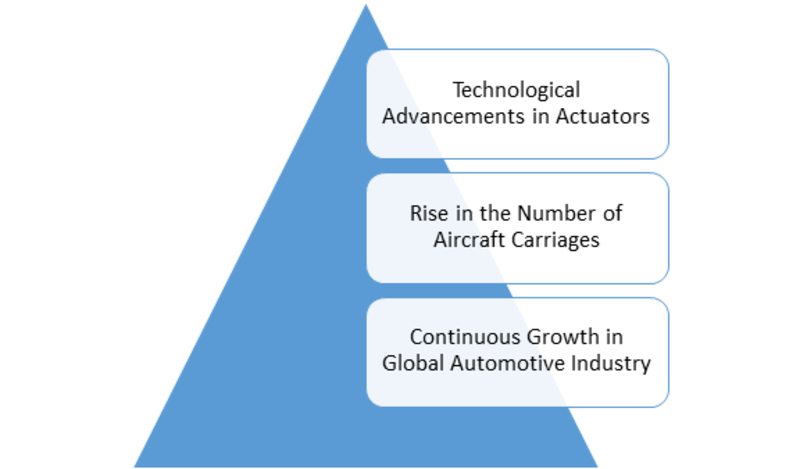 An actuator is an equipment, which converts energy into motion. It is basically used to apply a force on an entity to perform various mechanical operations. It is characteristically a mechanical device that takes energy, created by compressed air, electricity or liquid and converts it into various kind of motion, such as linear and rotary. Actuators usually are used in industrial or manufacturing applications and are used in devices such as switches, motor, valves and pumps.

Hydraulic, pneumatic, and electric actuators are called “conventional” because most robotic and automated mechanical systems use them. The wide application of conventional actuators across major end-use sector is creating a scope for innovation through constructive research & development program undertaken by major players in the industry. Lately, developments in material technology have presented lightweight and strong substances, making it conceivable to shape mechanically strong articulated mechanisms which are robust and weigh very less. Current advances in information technology, nanotechnology, and biotechnology will necessitate the expansion of shrunken, novel devices and gadgets that need to apply extensive forces. The identical demand for innovative actuators occurs in conventional industries such as military, entertainment, medicine, and manufacturing, where there is an cumulative need for manufacturing small-size and lightweight devices competent to apply large forces, generate high speeds, attain large displacements, and be extremely energy efficient. In all these applications, mission requirements are fetching drastically more stringent in terms of mass, dimensions, power, and cost. Improvements in actuator robustness and reliability associated with power efficiency and compact packaging can lead to effective devices that are significantly more capable and reliable at a lower cost.

At what CAGR can the actuators market expand?

What is the estimated valuation for the actuators market?

The actuators market can value at a decent valuation by 2027.

Who are the key players of the actuators market?

What is the actuators market growth driver?

The growing adoption rate of actuators among IoT-centric enterprises can spur the global actuators market growth.

What is the regional analysis of the actuators market?