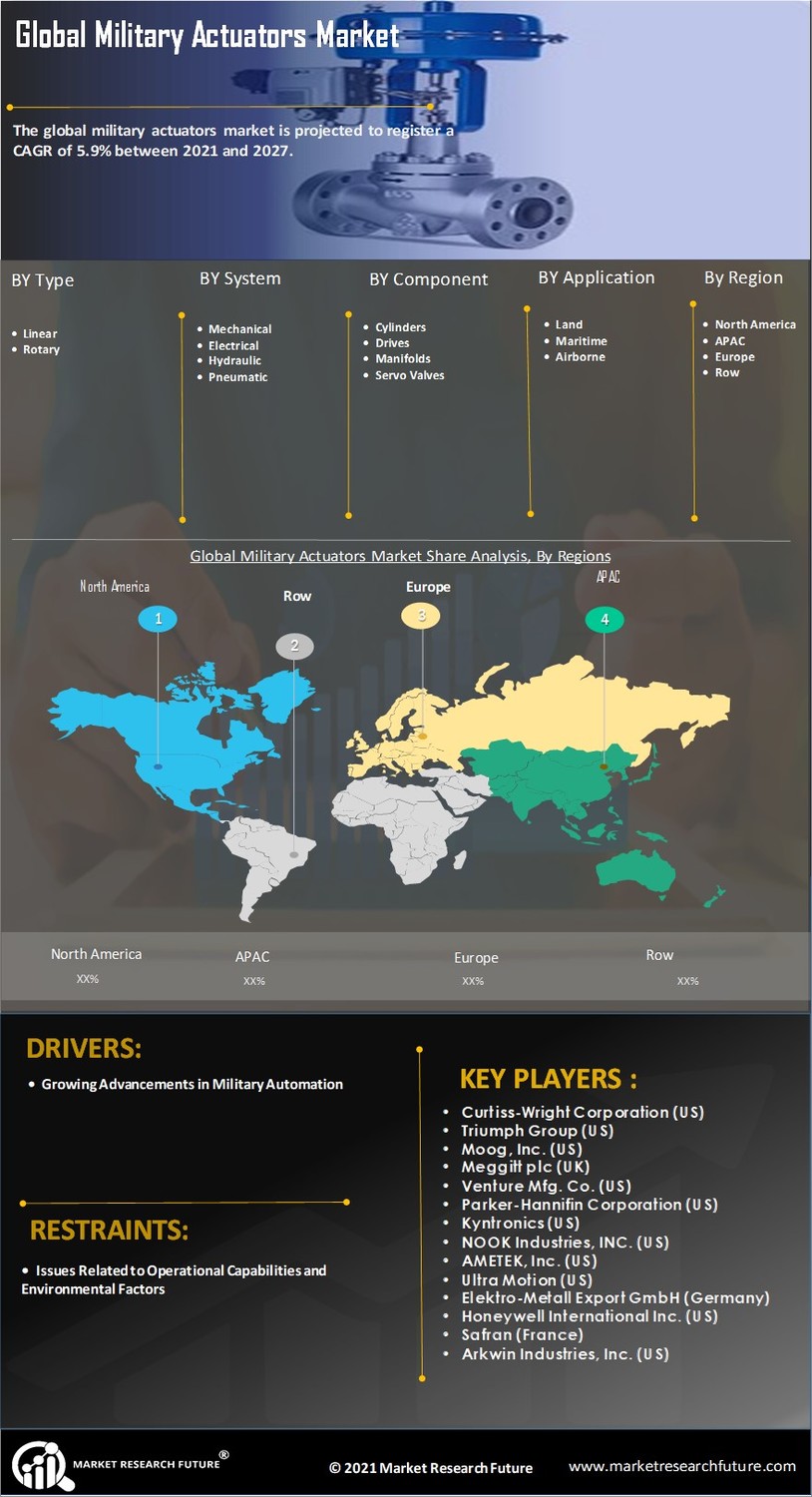 Military and defense use-cases need significant force in restricted spaces with higher precision control for position, speed and force. Actuators are devices that help fulfill every requirement of the defense and military applications, and its rising use in these sectors would be favorable for the global market. The surge in terrorist attacks worldwide, mounting security concerns and political unrest, coupled with the emergence of modern military programs raise the deployment rate of military actuators as well. Technological advances prompt higher use of high-performance and quality products for numerous military applications.

The United States is one of the biggest markets for military actuators, thanks to the surging use of modern technologies, rise in R&D initiatives in line with new launches, and the strong base of established multinational firms that develop actuators. The presence of highly developed sectors, and renowned giants such as Parker Hannifin; Venture Mfg. Co., and Curtiss-Wright; Moog Inc.; present in the region add to the market expansion rate. On the downside, rigid government rules on motion control noise, leakage issues and vibration control will be major obstacles for the worldwide market in the long run.

Having said that, rise in border tensions between countries, such as India-Pakistan, China-India, along with the unrest on a national level such as Iran and Syria, compel the government bodies to make higher use of advanced military equipment and spend on personal protection systems. Other than this, the heightened use of tanks, armored vehicles, and various offshore patrol vehicles, coupled with numerous aircraft and naval platforms, propels the demand for military actuators. Asia Pacific will be presenting a series of attractive opportunities to the international players, given the prominence of India, China, and several Asian nations seeing homeland security issues, internal conflicts, as well as on-border tensions.

According to MRFR, the current projections of global military actuators market growth till 2027 are expected to be lower than pre-COVID-19 estimates. The pandemic has had a devastating negative impact on the aviation, defense, and maritime industry across the world. In the defense industry, due to a decrease in tax revenues with a decrease in GDP, it is also expected to decrease the demand for new aircraft, naval vessels,ground vehicles, and related systems for defense applications in the next few years. This is also expected to decrease the demand for military actuators.

Many governments across the globe are focused on controlling COVID-19 outbreaks in their countries. Hence, they are investing more in healthcare equipment and the development of vaccines. Therefore, the defense expenditures on new systems are expected to be lower for the next few years. The defense expenditure is expected to increase gradually during the forecast period after the pandemic ends.

Thus, it is expected that the global military actuators market will grow at a slower rate in 2021 and 2022; from 2023, it will grow gradually.

Military systems employ automated technology in a range of applications, such as navigation, communications, detection, surveillance, intelligence, and reconnaissance. At present, the automation levels in the military range from remote-controlled unmanned aerial vehicles (UAV) to fully automated military systems. As actuators are a crucial component of automated systems, the demand for military actuators is also likely to surge with the increasing advancements in military automation. Thus, it can be said that growing advancements in military automation are expected to propel the growth of the global military actuators market during the forecast period.


Although the technological advancements have helped the end usersmeet the need for actuatorsin military applications, there are still issues pertaining to operational capabilities and environmental factors for various actuators available in the market. There are advantages and drawbacks associated with each kind of military actuator. In the case of pneumatic actuators, high noise levels and low efficiency are the major drawbacks. Meanwhile, hydraulic actuators face hydraulic fluid leaks and disposal issues and offer low efficiency. Over the last few years, the military actuators market has witnessed an increased preference for electrical actuators over pneumatic and hydraulic actuators due to their low maintenance requirements.However, the limited shock load handling capabilities of electrical actuators mark their limitations. These limitations have been responsible for restricting market growth. Thus, the issues related to operational capabilities and environmental factors are expected to restrain the growth of the global military actuators market during the forecast period.


The global military actuators market growth is expected to be at a rate of 5.9% over the analysis period (between 2021 and 2027) on account of the introduction of advanced autonomous military equipment.


MRFR anticipates the APAC market to exhibit the fastest growth during the conjectured period, thanks to the increased defense expenditure of key economies. In Asia-Pacific, the market growth is significantly driven by major countries, such as China, Japan, India, and Australia, due to the rising investments in military actuators. The regional market has been dominated by China. This dominance can be ascribed to China’s military expenditure, which is the second highest in the world, only behind the US. According to SIPRI, China’s military spending was estimated to be around USD 252 billion, most of which was allocated towards military modernization plans. Besides China, India (USD 72.9 billion), Japan(USD 49.1 billion), South Korea(USD 45.7 billion), and Australia(USD 27.5 billion) also spent significantly on military-related plans and projects in 2020. With continuously rising military expending in the region, the military actuators market is also expected to grow at a notable rate over the coming years.


The military actuators market is anticipated to grow significantly in the coming years due tothe growing advancements in military automation and the rising demand for electrical actuators. The global military actuatorsmarket is characterized by the presence of several global and regional vendors. The market is highly competitive, with all the players trying to gain maximum market share. Frequent changes in government policies, intense competition, and government regulations are the key factors that impact the global market growth. The vendors compete based on cost, product quality, and reliability.Recent Development

Moog Inc. has been hired by the US military for the supply of electromechanical actuators, with the company now expected to offer motion control for wing deployments, fins and Gremlins tail fins, in the attitude-controlled "Bullet" Gremlins recovery element.

Applied Motion Products Inc., the renowned motion control vendor based in the US, has launched a new series of linear actuators along with StepSERVO equipped integrated motors, part of all-in-one linear positioning solutions such as housing and bearing support, and drive electronics and controls.

The scope of the report highlights drivers, opportunities, restraints, and challenges surrounding the global market. With easy-to-comprehend segmentation that includes operation, platform,and region, MRFR projections are on the basis of historical as well as expected trends. Major firms active in the global market have been profiled and paired with the top strategies employed by them to remain competitive in the industry.

How Military Actuators Market Is Growing ?

Who Are The Top Key Venders of Military Actuators Market ?

In Which Region Military Actuators Market Having Highest Share ?

Growing Demand for Aerospace &amp; Defense Across the Globe is Expected to Boost the Demand for M...