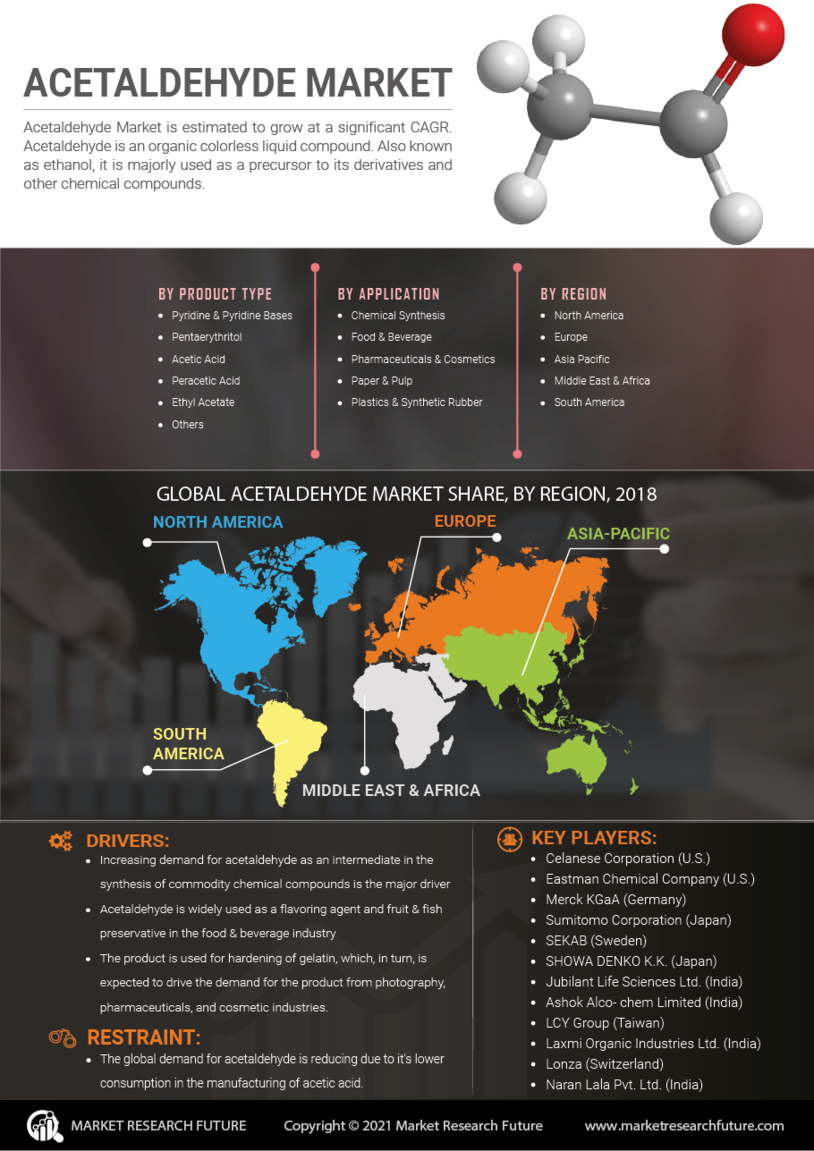 Acetaldehyde is an organic colorless liquid compound. Also known as ethanol, it is majorly used as a precursor to its derivatives and other chemical compounds. It occurs naturally in coffee, bread, and ripe fruits and is synthesized by some plants. Commercially, the product is manufactured through Wacker process, i.e., ethylene oxidation. The other processes for manufacturing acetaldehyde are oxidation and dehydrogenation of ethanol, hydroformylation of methanol, and hydration of acetylene. Acetaldehyde is a raw material for the production of various products such as pyridine & pyridine bases, pentaerythritol, acetic acid, peracetic acid, ethyl acetate, and others. It can be used as a solvent and bleaching agent for paper & pulp industries and rubber industries. However, manufacturing of acetaldehyde through acetylene hydration is least used due to the formation of large quantities of byproduct.

Increasing demand for acetaldehyde as an intermediate in the synthesis of commodity chemical compounds is the major driver of the Acetaldehyde Market due to their use in the major end-use industries such as food & beverage, rubber industry, paper & pulp, and others. Acetaldehyde is widely used as a flavoring agent and fruit & fish preservative in the food & beverage industry, which is likely to propel the market growth due to the changing food consumption habits and need for longer shelf life food products. Moreover, the product is used for hardening of gelatin, which, in turn, is expected to drive the demand for the product from photography, pharmaceuticals, and cosmetic industries. Additionally, the manufacturing of polymer resins and basic dyes using acetaldehyde is likely to propel the Acetaldehyde Market growth due to the high demand from paints & coatings industries.  However, acetaldehyde is identified as group 1 carcinogen by regulatory bodies such as National Institute of Occupational Safety & Health (NIOSH) and the International Agency for Research on Cancer (IARC). The global demand for acetaldehyde is reducing due to it's lower consumption in the manufacturing of acetic acid. This factors may challenge the market growth during the review period 2017-2023.

The Asia Pacific is anticipated to be the leading region in the Acetaldehyde Market owing to the increasing demand for acetaldehyde from agrochemicals and insecticides. The growing demand for agrochemicals from the major agricultural countries such as India, China, and Japan drives the market in this region. The increasing globalization coupled with huge demand for food & beverage, pharmaceuticals, and cosmetics is driving the market of this region further.

Europe is expected to grow USD 4.23 billion at a higher CAGR due to rising demand for acetaldehyde for the forecast 2030 production of synthetic and engineered lubricants.

North America is another significant region in the Acetaldehyde Market due to increasing demand for the product from the pharmaceuticals industry in this region. The U.S. accounts for the largest portion of revenues for this reason and is driving this regional market.

Lastly, countries such as Brazil and Argentina are driving the Latin American Acetaldehyde Market due to the rising demand and exportation of food & beverages in this region.

The Acetaldehyde Market is segmented on the basis of the Product Type, Application, and Region.

Based on the Application, the Acetaldehyde Market is segregated into chemical synthesis, food & beverage, pharmaceuticals & cosmetics, paper & pulp, plastics & synthetic rubber, paints & coatings, and others.

Acetaldehyde is an organic colorless liquid with the chemical formula CH3CHO. It is widely used as a precursor to a number of chemicals.

What is the major product type in the acetaldehyde market?

The increasing demand for a number of industrial chemicals derived from acetaldehyde is the major driver for the global acetaldehyde market.

Asia Pacific is the leading regional market for acetaldehyde.

Leading players in the market include Merck, Sumitomo, and Eastman, among others.