360 Degree Camera Market Information By Connectivity Type (Wired and Wireless), By Resolution (HD and UHD), By Camera Type (Single and Professional), By Vertical (Media & Entertainment, Consumer, Military & Defense, Travel & Tourism, Automotive, Commercial, Healthcare, and Others), and By Region (North America, Europe, Asia-Pacific, and the Rest of the World)—Forecast till 2030 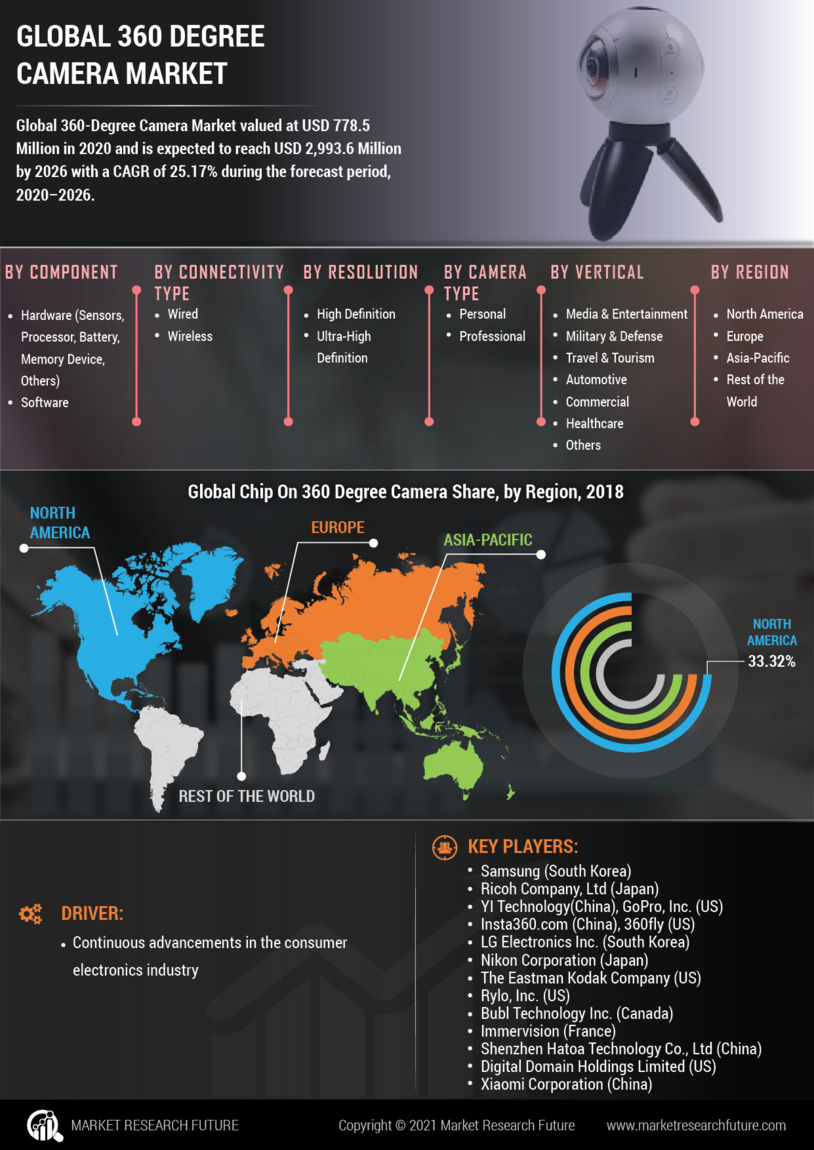 The 360 degree camera market is projected to register a CAGR of 24.6% from 2022-2030. The 360 degree camera market size is expected to reach approximately USD 2.5 Billion by 2030. A 360-degree camera, sometimes called an omnidirectional camera, is a compact, portable tool that enables users to record a 360-degree field view in the horizontal plane or a visual field of the complete sphere. It typically has two fisheye lenses mounted on either side of the camera's body, each with a field of vision of at least 180 degrees. The wireless 360-degree camera can connect to smartphones via Wi-Fi or Bluetooth, like digital single-lens reflex (DSLR), action, and mirrorless cameras. It makes editing, transferring, post-processing, and publishing easier and faster on social media.

The pandemic has brought forth new problems and trends in the everyday lives of the common person. People around the globe are battling to keep up with the shifting trends, which range from masks being prioritized to work-from-home tendencies. They are, nevertheless, paying more attention to their health. The need for cameras has decreased due to the fall in live events and trade exhibits. These cameras are frequently used at social gatherings, including parties and social events. The use of these cameras has decreased as virtual exhibitions and orientations have become the new trend, which the pandemic has hastened.

The growing need for improved security and safety among end users as a result of an increase in crimes ly is one of the key factors influencing the expansion of 360 degree surveillance cameras. Besides this, the market for 360-degree cameras is expanding due to the rising demand for and use of smart devices ly. The automotive, healthcare and industrial verticals will create substantial growth possibilities for the globe's 360-degree security camera makers, in terms of value, given the many features of 360-degree cameras and growing awareness about the same across various industry verticals.


Using a 360-degree camera, users can record every detail of the events for viewers. Because 360-degree cameras are now reasonably priced, users may readily purchase them to get a complete view of their surroundings. The need for 360-degree cameras is increased by the integration of these cameras with mobile devices and viewers' increasing preference for real-time 4K and HDR content. Users are encouraged to make and post their 360-degree videos on major social networking sites, like Facebook and YouTube, which support 360-degree camera content.


The use of 360-degree cameras in the automobile industry is rising quickly. Using 360-degree cameras in automobiles would help drivers have a greater comprehension of their surroundings, an awareness of obstacles, and overall increased vehicle safety. The 360-degree cameras record images from every aspect and show them on the LCD of the vehicle. 360-degree dash cameras are also growing in popularity since they can be a reliable source of proof in crashes or other mishaps. These cameras come in various types, sizes, and designs, each with special characteristics. Some of the best-equipped car cameras on the market include the Falcon Zero F360, WISE UP 360-Degree Dash Cam, Falcon 4-Camera 1080p Trucker Dash System, and More Fine 3600 Car Camera.

The 360 degree camera market segmentation, based on connectivity type, is wired and wireless. The 360 degree camera market growth was prominently high under the wired category in 2021. Cables connect wired cameras to a power supply and an internet connection. In photo studios, this kind of camera is frequently utilized. On the other hand, the wireless category is anticipated to be the most opportunistic during the projected period. Wireless 360-degree cameras are frequently utilized for both home and commercial purposes. The security of homes is another application for these cameras.

Based on camera type, the market is divided into single and professional. Professional cameras dominated the market for 360-degree cameras in 2021 since they can take wide-angle 360-degree high-quality photos. They are incredibly efficient and improve situational awareness and overall security.

By vertical, the 360 degree camera market has been segmented into media & entertainment, consumer, military & defense, travel & tourism, automotive, commercial, healthcare, and others. In 2021, the consumer category had a major share of the market. The market for 360-degree cameras has room to expand because more and more people are using them for various purposes, such as sports, photography, events, and festivals. On the other hand, the media and entertainment area is anticipated to be the most opportunistic during the projected period. The 360-degree camera setups use many cameras, producing amazing 360-degree views. These systems are exceptionally strong and easy to use, making them perfect for a range of shooting situations. 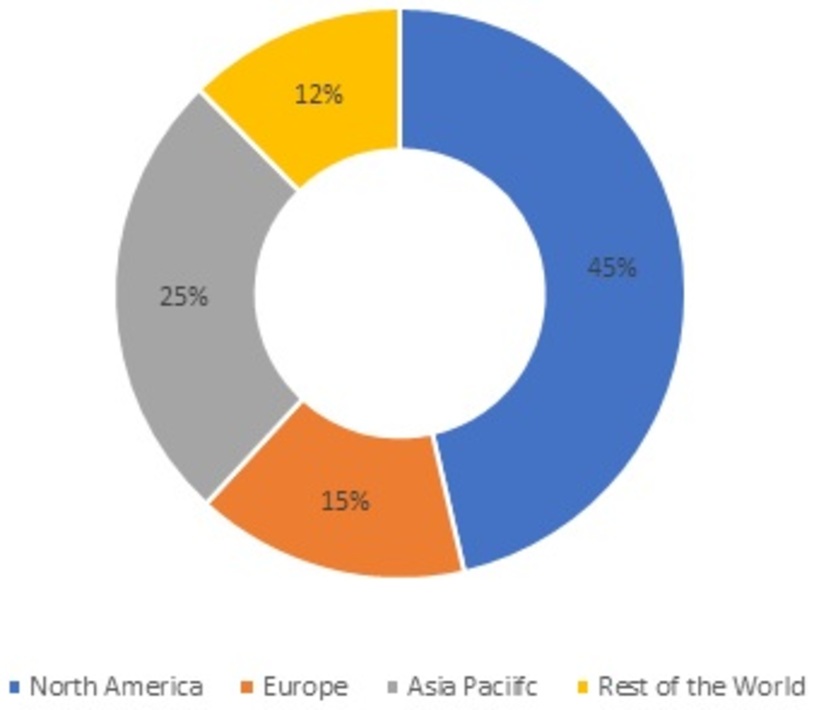 By region, the market has been divided into North America, Europe, Asia-Pacific, and the Rest of the World. North America accounted for the most extensive market share. Asia-Pacific will exhibit the highest CAGR during the forecast period.

Asia-Pacific accounted for the fastest growth rate in the market in 2021. Due to expanding technology advancements such as high definition (HD) 360-degree cameras and sensory automation, which are anticipated to fuel the expansion of the 360-degree camera market in the Asia-Pacific region, it is predicted that consumer budgets will increase.

The existence of small and major firms that compete on price and quality has been used to examine the competitive landscape of the market. The key market participants are developing novel ideas and spending a lot on product research and development. The objective is to launch these goods ly during the anticipated time frame by including functionality and features that cater to a wider audience.

To identify and infer the drivers, restraints, opportunities, and challenges in the 360 degree camera market growth

To provide a detailed insight into the major companies operating in the market. The profiling will include the company's financial health in the past 2-3 years with segmental and regional revenue breakup, product offering, recent developments, SWOT analysis, and key strategies.

What is the 360 Degree Camera Market Growth rate?

The market is expected to register a CAGR of 24.6% over the next 10 years, according to 360 degree camera market research.

Who are the key players in the 360 degree camera market?

What is the study period of the 360 degree camera market report?