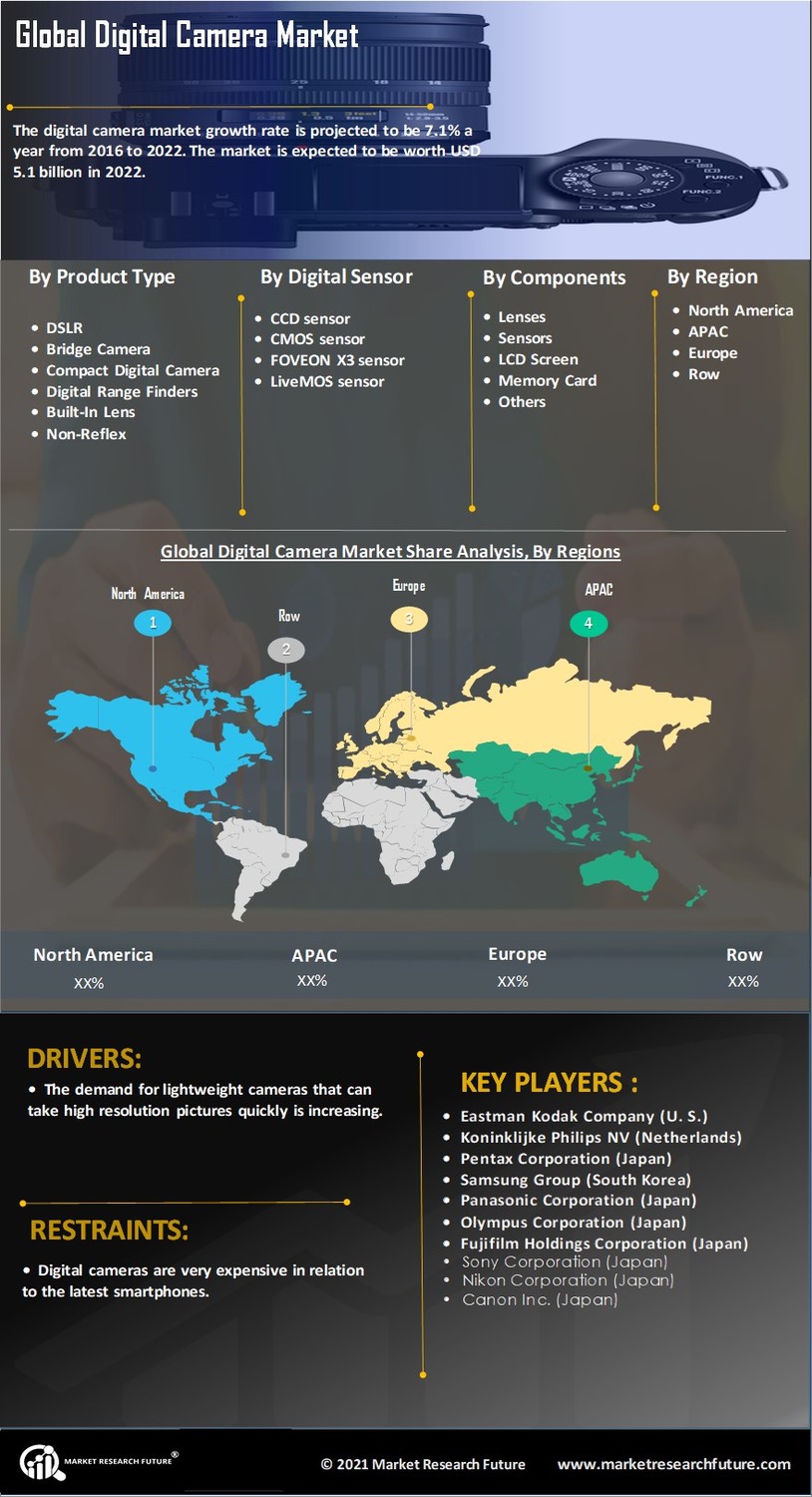 The digital camera market growth rate is projected to be 7.1% a year from 2016 to 2022. The market is expected to be worth USD 5.1 billion in 2022. Digital cameras were created to capture digital images of the environment and various objects in digital picture form. It uses a memory chip and records images in digital form on this chip.

Digital cameras transmit the images to a computer system for storage and translation once it has captured them. It’s the computer system that prints these images out. The lenses that these use tend to have a diaphragm with a spotlight in them. Some digital cameras are capable of incorporating sound and/or video into certain digital pictures.

COVID-19 is to the 21st century what the Bubonic Plague was to the 5th century and the Black Death was to the 14th century - a pandemic that changed the destiny of the world. COVID-19 is a dangerous virus. Many people and all governments around the world realized this early on because of all of the deaths that the virus caused. It also left those people who recovered either vulnerable to contracting it again after a few months. People who recovered also developed serious long-term health problems like shortness of breath and diabetes.

Governments wanted to stop the spread of this virus by imposing lockdowns and quarantines. This forced many businesses in many industries to either drastically scale back production or temporarily halt production. The digital camera market would have been severely adversely affected were it not for the ingenuity of its manufacturers. They went online and started to offer free tutorials on how to use these cameras on various social media platforms. This was very successful since many people wanted to busy themselves during quarantine.

Now that a vaccine for COVID-19 is readily available people are starting to venture outside, more often than not without masks. They are itching to take pictures in the same ways that they did in the pre-pandemic era. Hence, the demand for lightweight cameras that can take high resolution pictures quickly is increasing. This is largely what’s driving growth in the digital camera market.

Digital cameras are very expensive in relation to the latest smartphones. They also don’t have all of the abilities that smartphones do. This, combined with the fact that it can’t transfer data as fast as smartphones can is holding back growth of digital camera market.

Eastman Kodak is a major player in the digital camera market. It has managed to become an industry leader and survive in the camera market for more than a century by constantly investing in research and development. This has allowed it to create a sustainable competitive advantage by allowing it to come up with and market newer generations of more effective digital cameras with far more innovative applications.

The digital camera market can be grouped into the following sub-segments based on type:

The application sub-segment of digital camera market is further grouped into commercial and residential.

Technologies that digital cameras used have advanced dramatically in the first fifth of the 21st century. Vendors are now creating newer and improved digital cameras with automatic payment gateways.

The North American region may have the largest digital camera market share but the Asia-Pacific region has the largest digital camera market growth rate. The nations of India, China, and Japan have large populations where the middle classes are growing at breakneck rates. This is creating a lot of demand for people who want to go on vacations and want to have the opportunity to take pictures with advanced digital devices while doing so.

The demand for DSLR cameras is growing rapidly in the Asia-Pacific region. This is a major driver of growth for digital camera market in most Asian nations.

Companies are finding that they can stay competitive only if they invest heavily in research and development. They tend to expand their future horizons when they do so because they are able to develop and market a new generation of more effective and superior digital cameras. These new generations of digital cameras also have more innovative and diverse uses than their predecessors did. In any case, companies that invest heavily in research and development find that they have an easier time strengthening their position in existing markets and they have an easier time entering new markets. They also find that they last for longer in newer markets.

Another way that companies can survive in a very competitive market is by merging with and acquiring other successful companies. They can access the other company’s customers. This alone will greatly increase their revenue generation potential. They can also invest much more in research and development because they tend to have the greater financial resources and manpower to do so. These companies can then develop and market a new generation of much more effective digital cameras that can help them gain many more new customers in new markets and in existing ones. The resulting companies can also strengthen their positions in existing markets.

Eastman Kodak is a very successful American company in the digital camera market. It has managed to become an industry leader by creating a sustainable competitive advantage through intensive investments in research and development. This allowed it to develop and market a new range of successful digital cameras that allowed it to enter new markets and cement its strong positions in existing markets.

High resolution cameras with more pixel power have become popular in the digital camera market. These more powerful cameras are the result of intensive investments in research and development

What are the drivers of the digital camera market?

Extreme growth in the fashion and entertainment sector, improved SLR camera sales, and digitalization are the marketing dynamics that fuel up the digital camera market in this forecast period. Penetration of the internet and rise in social media platforms is expected to contribute to the growth.

What is the scope of growth in the digital market globally?

Who are the developers of digital cameras globally?

Some prominent developers are Eastman Kodak Company(U.S.), Pentax corporation(Japan), Koninklijke Philips N.V.(Netherlands), and Samsung Group(South Korea), Nikon, Canon, Hasselblad, etc. Canon has dominated the market in 2020 and had a digital market share of 45%. Sony and Nikon followed the ranking with a market value of 19% and 20%.

List some of the features of a digital camera?

The high volume of smartphones and the decline of innovation hinder its expansion. There are the majority of industry participants who do not desire to participate in discovering its features.