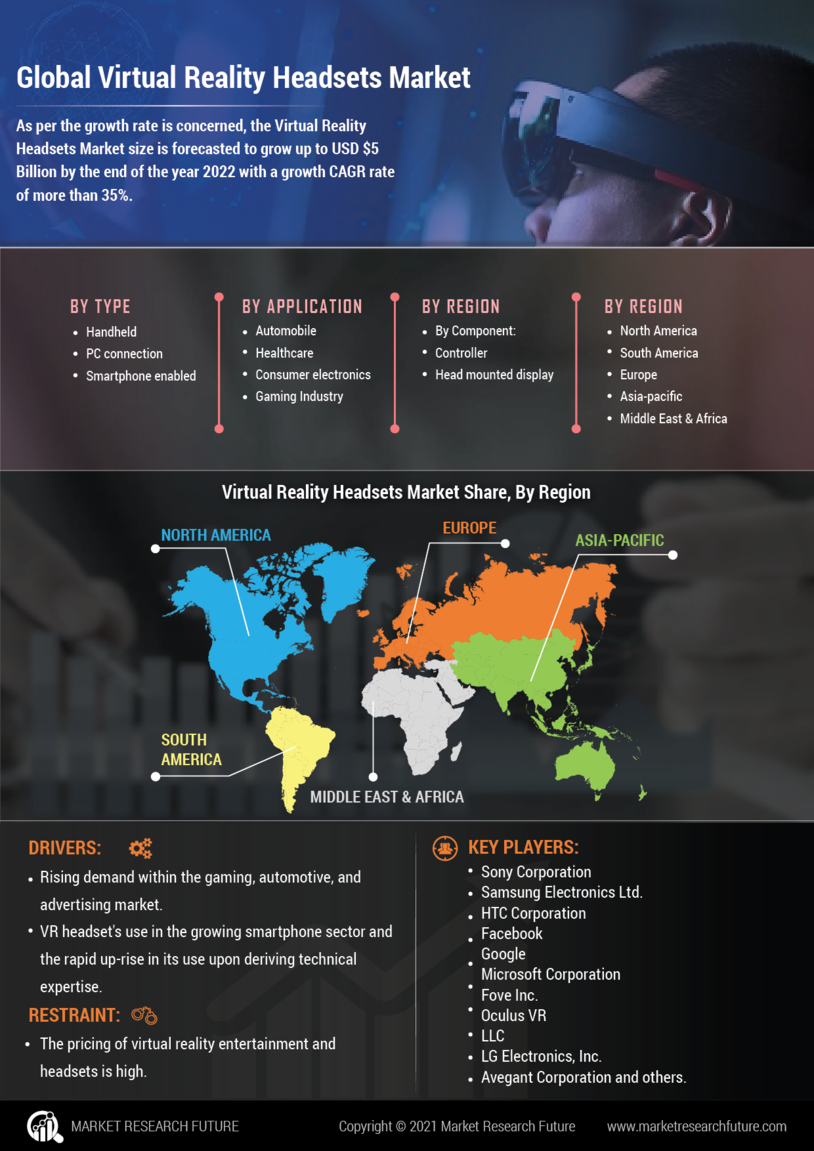 As per the growth rate is concerned, the Virtual Reality Headset Market is forecasted to grow up to USD $5 Billion by the end of the year 2022 with a growth CAGR rate of more than 35%.

Virtual Reality Headsets are quite favorable for the large group of people for experiencing 3D games. Moreover, it is also preferred for listening to movies and watching amazing movies. Various IT companies have already put up the concept of using virtual reality headsets. The software and hardware providers have also leveraged the use of it. As the demand rate is high for virtual reality headsets, major companies have now turned up to join the Virtual Reality (VR) market for experiencing immense business outcomes. As the major area of demand for VR headsets is within the gaming sector, companies are using this technological ideology to increase the quality of gaming.

The use of VR Headsets is meant to give a more realistic feel to the players who love to enjoy interactive games. High graphic games are highly appreciated, but with the era of 3D, the gaming industry is now booming, and so is the virtual reality headset market. With the new games, music, and movie creation, the playing, listening, and watching experience will be enhanced. Complementing the 3D environment and implementation within the media and gaming industry, the manufacturing count for virtual reality headsets has also increased.

The Virtual Reality Headset Market Report focuses on the growth potential of the global virtual reality headset market. It also highlights the growth potential of the market in the coming years. Along with that, the report also focuses upon the market segmentation, growth aspects, regional classification, key player analysis, and other such aspects in brief. The major aspect that is covered within this report is the COVID analysis that stopped the pace of the market at an instance but is now revived.

As the game stations and virtual reality movie hubs were closed due to the COVID 19 outbreak. But the personal headsets were being sold on a higher count as people wanted to experience fun and enjoyment while they were in a lock-down situation. As per the Virtual Reality (VR) Headsets Market Analysis based upon COVID impact, the market is affected on a moderate scale because the revenue that was supposed to be generated from the game stations and the movie hubs was stopped and was probably a higher source of revenue generation for the Virtual Reality Headsets Market. Another impact that the market experienced was the low production of VR games. The VR game and movie maker businesses were also down, for which no new content was out for the customers. Therefore, the sales rate was somehow dropped due to that aspect as well.

The key players and the government authorities did put up immense efforts to resume the movie hubs and game stations for promoting the associated market to maintain the revenue generation aspects once again. As the COVID impact has now taken a low toll, the gaming and movie-making industry has also resumed its work to create VR content for viewers and players to enjoy the optimal experience with the quality VR headsets offered by the major key players across various regions of the globe.


After the COVID impacted the global VR headset market, the demand rate was somehow dropped, but as the market has now resumed, the growth aspects are quite evident. The most important factor that is responsible for driving the growth of the VR headset market is its rising demand within the gaming, automotive, and advertising market.


As all the industries and businesses are now being reopened after COVID impacts, there is a high scope of opportunity within the gaming and entertainment sector. But with the modern types of VR headsets coming into play, the applications have also increased.

Today, VR headsets are being used not just for enjoying movies or playing games but also for the military applications and health sector. The increasing scope of the market highlights the adaptation of VR headsets within the mental & health training programs. With such demands, the Virtual Reality Headsets Market Growth rate is predicted to be at 35%.


The pricing of virtual reality entertainment and headsets is high within the market, which might be a major restraint. It is so because, due to this variation within the price, most people won’t prefer to switch to VR entertainment or work culture.

VR being used in the work culture is also a popular adaptation as digital collaboration and communication is in high trend. It is still not implemented completely as the video-conferencing software and team collaboration spaces are competing within the Virtual Reality Headset Market. Hence, these restraints will possibly be eradicated in the coming years.


Recovering from COVID was one of the biggest challenges of the Virtual Reality Headset Market. At the same time, the global Virtual Reality Headset Market has already come halfway on the path of attaining recovery from COVID impact. But there are still some things to rectify and recover. The VR game and entertainment media makers are yet to resume with full occupancy.

Slower production of games, movies, and other VR content will eventually slow down the sales of VR headsets. The key players are upgrading their headset manufacturing facility to develop quality on priority to meet the rising demands in the long run.


As per the Virtual Reality Headset Market Trends, VR has been highly used within the medical sector, military sector, and gaming sector. Slowly & steadily, the use of VR headsets is now inching towards the smartphone sector, IT sector and is being implemented into the office culture as well.


Based on the type segmentation, the global Virtual Reality Headset market is segmented into different types of headsets that include handheld headsets, smartphone-enabled headsets, PC-connected headsets, and others.


Based on the component segmentation, the global Virtual Reality Headset market is segmented into different components for diverse applications of the VR headsets. The component-wise segmentation includes controllers, head motion tracking sensor, display screen, stereo sound system, a head-mounted display, and others.


Based on the application segmentation, the global Virtual Reality Headset market is widely used for diverse applications that include consumer electronics, games & entertainment, healthcare sector, education, automobile, and others.

Based on the regional classification, the global Virtual Reality Headset Market is widely spread across various regions of the globe such as North America, Europe, Asia Pacific, Middle East & Africa, and others.

Out of all the regions, North America has dominated the entire market by holding the largest Virtual Reality Headsets Market Share. The investment amount is high upon the technologies within the region, and the demand scale is also larger for the military, education, and film sector.

The key players of the global Virtual Reality Headset Market are:


Out of these, the major key player for the Virtual Reality Headset Market is the Sony Corporation that has embedded high efforts to develop the era of entertainment overages. Sony has upgraded its technologies overtime to implement VR onto its televisions and other entertainment media contents. To help Sony customers enjoy Virtual Reality, it also started to manufacture high-quality VR headsets.

In September 2020, Sony announced the pricing for its first PS5 accessory. It was Sony’s DualSense controller along with the gamepads.

In March 2020, XRHealth announced the launch of VR telehealth support groups. It was focused on the people within the isolation under COVID impact. With it, people can contact doctors and other patients as well.

The Virtual Reality Headset Market Outlook overview is as follows:

The report is destined to focus on giving insight into the factual growth aspects and challenges of the global virtual reality headset market. It highlights the core fundamentals within the competitive market grounds.

The segmentation highlights are as follows:

What is the projected growth rate for the virtual headsets market?

The growth rate is expected to grow beyond the present CAGR of 35% to help the market generate higher revenue from all across the globe.

Which component segment is complementing the higher growth of the market?

Which application has been witnessed with major use of VR headsets?

The application within the gaming and entertainment segment has witnessed the major use of VR headsets.

Who are the key players operative in the global virtual reality headsets market?