The Largest Oil and Gas Corporations in 2022: Who are They?

Oil demand has begun to suffer because of rising prices and a weakening global economy, although a recovery in China and robust power generation partially offset these effects. At the same time, the rate of growth in worldwide demand has slowed slightly in 2022. A further increase is anticipated in 2023, driven by the non-OECD countries' robust development track. The World Bank also cautioned that the invasion of Ukraine by Russia and its effects on supply chains, inflation, and financial conditions had accelerated the decline in global economic activity in its most recent edition. Following are some of the largest Oil & Gas firms by revenue in 2022 based on net income.

GAZPROM, RUSSIA: PJSC Gazprom is a Russian majority state-owned multinational energy corporation headquartered in the Lakhta Center in Saint Petersburgh. During January 1 and May 15, 2022, Gazprom produced 193.8 billion cubic meters of natural gas, which marked a 3.7% decline from the corresponding period of the previous year. The gas producer has also reduced its exports to countries outside the Commonwealth of Independent States. The company reached 55.9 billion cubic meters from January 1 to May 15, 2022. Net sales of gas increased by 85% in 2021. Net sales of refined products increased by 44% in 2021.

PETROBRAS, BRAZIL: Petroleo Brasileiro engages in oil and gas exploration, production, and distribution activities. The exploration and production segment of the company involves crude oil, natural gas liquids, and natural gas exploration, development, and production. They are a publicly held corporation that operates in an integrated and specialized manner in the oil, natural gas, and energy industry. Petrobras' quarterly net income for the three months ending June 30, 2022, was $11.010B, up 35.57% from the previous cycle.

SHELL, UK: Founded in 1907, Shell Plc, formerly Royal Dutch Shell Plc, is a UK-based multinational energy and petrochemical company with operations in over 70 countries and 13 refineries. The company has expertise in the exploration, production, refining, and marketing of oil and natural gas and the manufacturing and marketing of chemicals. The company invests in low-carbon power sources and new fuels for transport, such as advanced hydrogen and biofuels. The company is looking to create cleaner energy solutions in ways that are environmentally, economically, and socially responsible.  The largest oil firm in Europe announced adjusted earnings of $11.5 billion for the second quarter of the year, above the previous high of $9.1 billion set in the first quarter. That was higher than the $5.5 billion it brought in a year earlier and outperformed the $11 billion average expert projection.

CHEVRON, US: This energy corporation operates through two divisions; its upstream segment operations include developing, exploring, and producing crude oil and natural gas and re-gasifying liquified natural gas. Its downstream segment focuses on refining crude oil into petroleum products and transporting them by pipelines, marine vessels, motor equipment, and rail. Chevron's quarterly net income for the fiscal year that ended on June 30, 2022, increased by a whopping 277.09% to $11.622 billion. 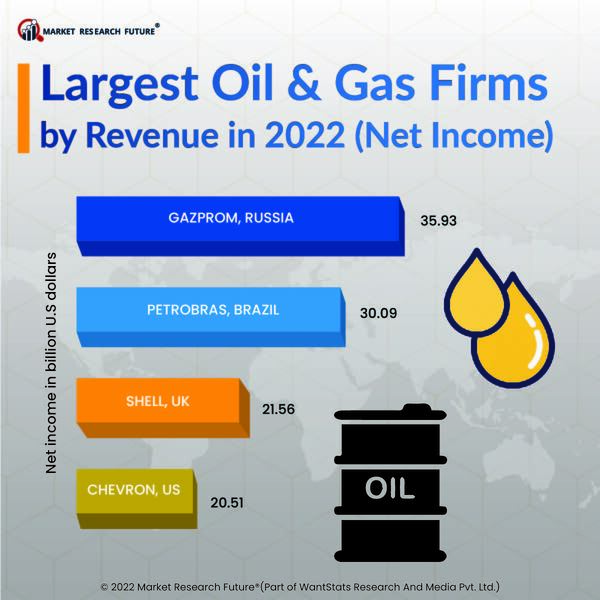 The Largest Oil and Gas Corporations in 2022: Who are They?