Over 16.5 million geolocation transactions were recorded in Maryland over the course of the US thanksgiving holiday, according to the data from GeoComply a Vancouver, Canada-based geolocation security and compliance company.  The state launched regulated online sports betting industry on November 23, 2022, the state approved 7 betting sites approved by the Maryland Lottery and Gaming Control Agency. The first day of launch recorded over 3.7 million geolocation transactions.

According to GeoComply data from November 23-27 over seven operators were operating in the region and approx. 477,365 new accounts were registered during the same period. According to GeoComply, Maryland's education fund will see a significant increase because of the record-breaking statistics, with legislators noting mobile sports betting as a major source of income for the Blueprint for Maryland's Future Fund in 2021. Moreover, in order to safeguard customers and raise tax revenue for the state's education fund, Governor Larry Hogan publicly campaigned for the rapid roll-out of mobile betting.

Since the launch, the betting industry has seen a surge in demand due to local NFL teams along with college football and basketball matches in the region, the demand is expected to surge even more due to the FIFA 2022 world cup in Qatar. The 16.5 million transactions are nearly double the volume of the neighboring state of Virginia which accounted for 8.5 million, and four-time the volume of Colorado accounting for 3.8 million transactions. Additionally, that number is far higher than Tennessee's 6.6 million and Indiana's 6.7 million. It also matched 17.1 million, which was the same as the much larger market in New Jersey, which is more established and has a far larger population than Maryland. Marylanders will continue to choose legitimate, licensed operations that offer player protections and tax revenue for the state instead of shady offshore bookmakers, just as lawmakers intended. 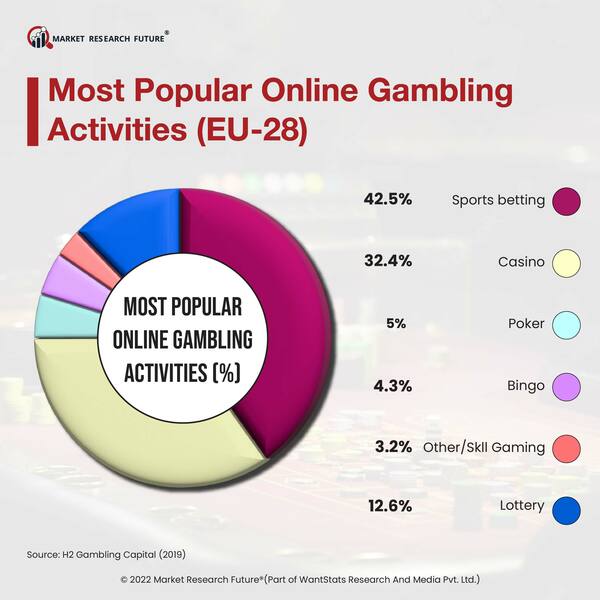 The image shows most popular online gambling activities in percentage