Wind Tower Market Report, By Product (Tubular Steel, Concrete, Hybrid and other), By Application (Onshore and offshore) and By Region - Global Forecast to 2030. 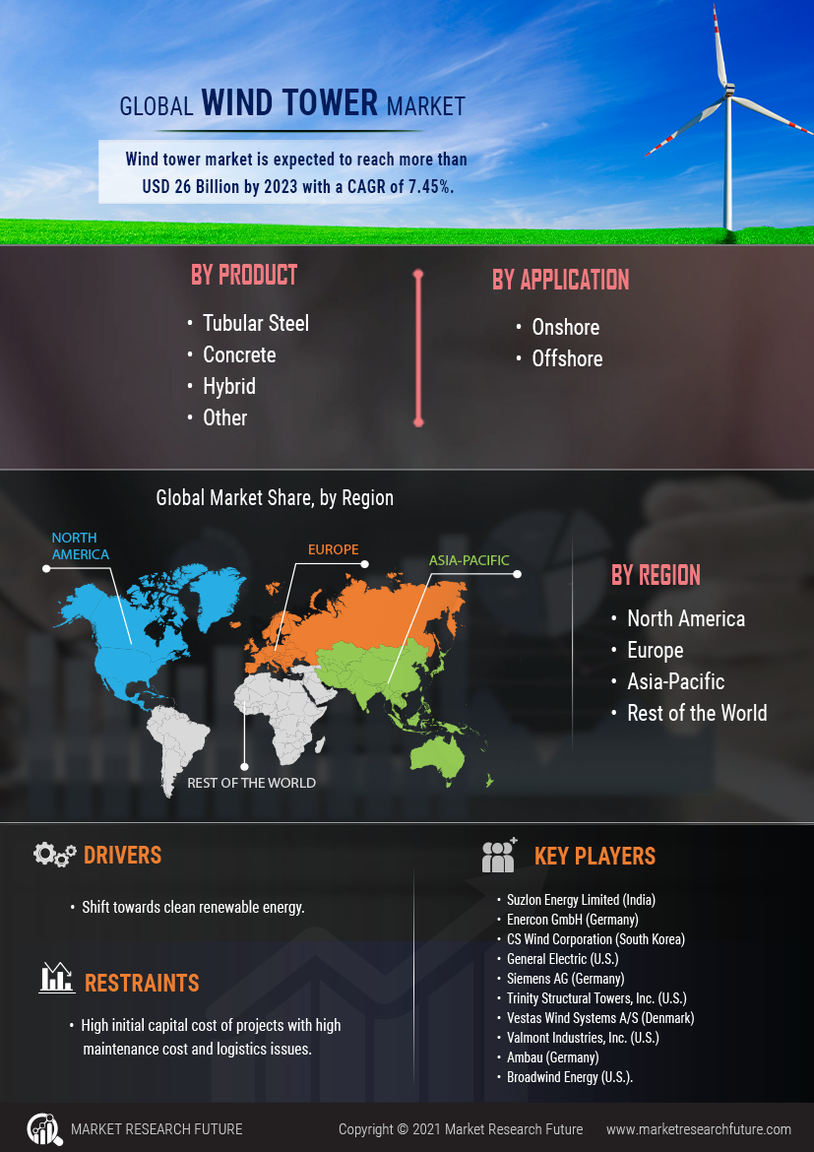 From the recent research reports, the Wind Tower Market is anticipated to grow from USD 2.9 billion in 2019 to USD 51.31 billion by 2027, with 9.82% CAGR. These market trends have represented the rising demand followed by the amalgamation of the demand and supply chain mechanism of the wind tower market amid the ongoing forecast period ending in 2027. A wind turbine is a device that converts wind kinetic energy into electrical energy. A gearbox finds its application in wind turbines as it increases the rotational speed of a low-speed main shaft to a high-speed main shaft which is further connected to an electrical generator and speeds up the process of making electricity. Also, due to variable wind loads that are non-linear, the gears of a wind tower are subjected to severe continuous loading. The failure rate of the gearbox is much higher than other components of the wind turbine system.

The declining cost of wind energy and increasing investments in the wind power sector are the key drivers for this market. On the flipside, substitution between solar energy and gas-fired power plants is expected to restrain the market. The solar energy industry has achieved cost reduction significantly higher than the wind energy sector. The concrete tower is expected to be the fastest-growing segment in the wind turbine tower market as they require low transportation costs and have high strength. The inputs and material required to build these towers is generally available locally. Emerging markets such as Africa, which has various geographical locations that could be considered suitable for wind energy deployment, are likely to act as an opportunity.

The pandemic outbreak had been a significant issue for the smooth functioning of the wind tower market. The emergence of the healthcare problems offered by the pandemic on a large scale is troublesome for everyone on both the personal and professional levels.

Tubular steel towers, are a part of the wind tower market. They are the most often utilized tower type in modern turbines since they are visually appealing and have predictable dynamic and fatigue qualities. When manufactured in a bulk quantity, they are cost-effective, and their design, further, adds strength to wind turbine structures. The tubular steel towers segment of the global market will develop its wind tower market share quicker than the concrete towers and other towers segments. However, the impact of COVID19 has slowed the tubular steel towers market due to disrupted demand and supply chain mechanisms and activities.


The increased demand for clean and reliable energy to minimize global carbon emissions and maintain ecological balance by generating power from renewable resources is driving expansion in this sector. However, the wind tower business may be hampered by projects' high initial capital costs, high maintenance costs, and logistical challenges. According to business chiefs and wind tower market analysts, the wind tower market will expand rapidly. Furthermore, the rising degree of the economic growth has gained momentum as a result of carbon reductions.


However, the wind tower market is witnessing the rise of issues that hold the potential to restrain the market growing from growing as per its full potential during the continuous period that ends in 2027. The market is witnessing the rise of restraints like the lack of proper funding, modern infrastructure, supportive facilities, and research and development techniques. Also, the arrival of the pandemic has worsened the situation. However, the collaborations and innovations on the way have better prospects for the wind tower market for the ongoing forecast period.

Looking at the latest research analysis, the wind tower industry can be bifurcated based on type, application, installation type, and capacity. Out of all the segments of this market, the onshore wind power segment will witness tremendous growth during the forecast period as the government of many developing countries form policies that, in turn, provide support for renewable energy projects that will uplift the growth of this market to a great extent.

Let's look at wind tower market share and other details. This industry is remarkably working in five major regions of the world: Asia Pacific, Europe, North America, South America, and Middle East & Africa. During the forecast period that ends in 2027, the Asian Pacific region will dominate this market. The growth in this region will be due to favorable government policies and new installations in developing countries like China, India, and Japan. Let's look at the research reports of the past few years. China is known for its largest wind power generation capacity. India also holds 4th place in the world ranking for its wind power generation capacity, which is another reason for the growth of this market in this region during the forecast period. The Asia Pacific is a significant income source for the global wind industry, with China, Japan, and India being the most notable countries due to high electricity consumption, rapid urbanization, and technical improvements. Wind tower investments are rising based on the nacelle and turbine. The material and weight of a wind tower impact its strength and stability.

Based on the data obtained from wind tower industry analysis, the prominent players in this market that are helping in expanding the global market share are mentioned as follows:

As wind turbines gearbox are considered the essential component of wind turbines, which increases their rotation speed. This market's key players are changing their gearbox designs daily to increase their resistance following loading and environmental conditions. In addition to this, they are trying to make their systems more cost-effective and performance efficient.

Wind energy, as a prominent part of the market, is now in its early stages of development. The main reason behind this is the trend of an increased power consumption, global measures to employ more renewable, non-conventional energy sources, and the global need to limit carbon emissions. As part of their carbon emission reduction aims, the European countries and the E.U. have sponsored many wind projects with favorable incentives. The European region is currently the market leader in wind turbines, followed by North American countries like the US and Canada.

A wind tower’s design has the most influence on the global growth of the market. As a result of the same, the wind towers for onshore applications differ markedly from the towers for offshore uses. Increasing wind power generation capacity, stringent environmental laws for emissions from conventional fuel combustion, rising demand for more prominent blades, and more government funding for wind power projects are just a few examples. The Chinese region is currently has the most wind energy projects in the planning and construction stages, followed by Japan and South Korea.

The wind tower market report has been prepared to keep the present functioning, followed by the futuristic approach held by the market segments and players amid the ongoing forecast period. The global market report discusses the impact of the pandemic on market operations. Further, it discusses the role of the market players in the form of recent developments that has positive attributes in store for the market. The market report has been prepared to help the budding and experienced market buyers and investors make decisions for the period. The report also helps to mark the players' responses due to the ongoing improvements.

At what CAGR can the wind tower market surge?

What is the estimated valuation for the wind tower market?

Who are key players of the wind tower market?

What are the wind tower market drivers?

The wind tower market growth can be expedited due to the increased for clean energy.

What is the regional analysis of the wind tower market?

The high need for power in EU to cause surge the regional wind tower market to surge.