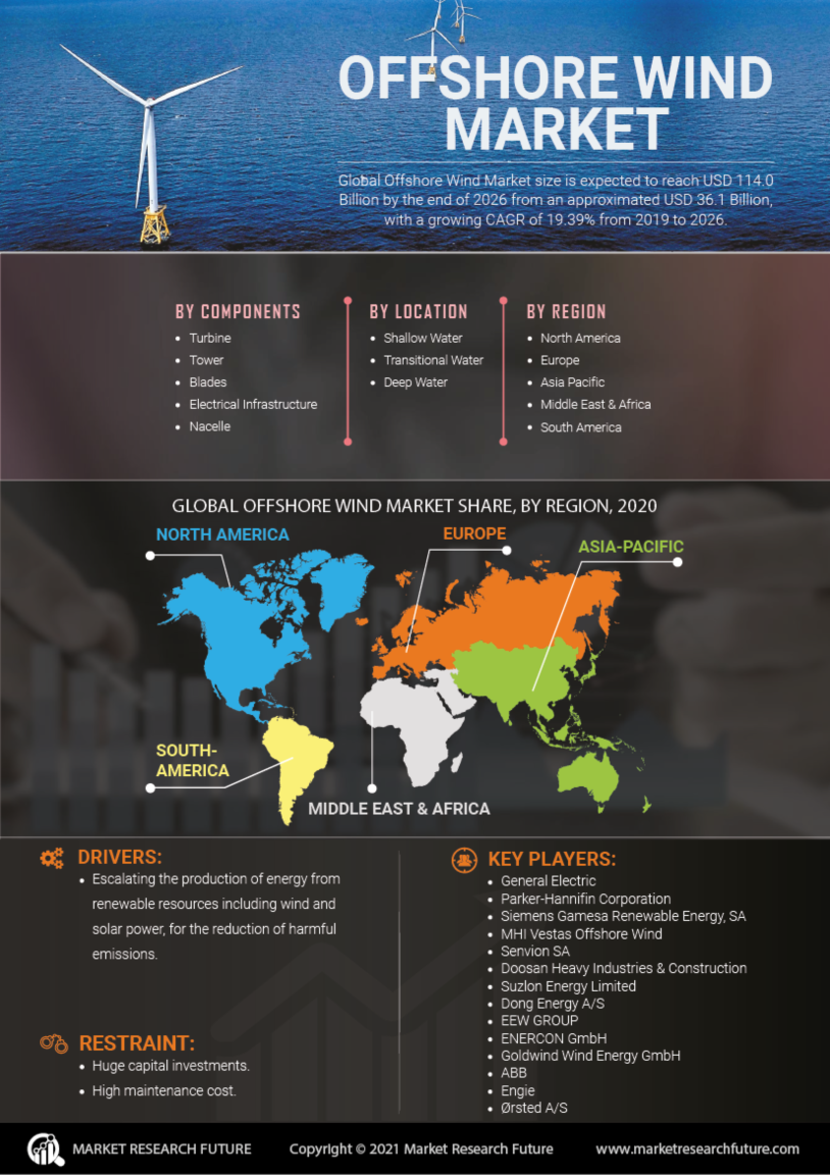 The prominent companies or the major key players of the global offshore wind market across the globe are focusing on building partnerships and collaborations to gain a competitive circumference. In order to magnify the market trends, the strategies of collaboration have been adopted to increase the efficiency of manufacturing and devaluate the total cost accumulation costs which are likely to boost the growth of the offshore market analysis.


With the rise in concern about the environment, the major offshore wind market industries are focusing on escalating the production of energy from renewable resources including wind and solar power, for the reduction of harmful emissions. The major key players of the offshore wind market are administrated to develop a magnificent budget for the installation of the projects and R&D activities to enhance the efficiency of the operation and the product portfolio.

There are several ongoing projects incorporated with advanced technology which is likely to improvise the infrastructure of the existing projects which is estimated to boost the growth of the global offshore wind market, during the forecast period.


The global offshore wind market is predicted to witness remarkable growth during the forecast period due to increasing investment in the development of clean energy. According to the reports, the UK government has entrenched the offshore Wind Investment Organization (OWIO) in order to promote investments for sustainable energy resources. The collaboration of the OWIO with the prominent investors for the country’s smooth offshore wind supply chain is likely to create opportunities for various market players and manufacturers.


Huge capital investments and the high maintenance cost are the major restraints of the offshore wind market which leads to the decline of profit. Issues related to logistics are another major hurdle in the growth of the market. Offshore wind turbines are responsible for the harsh marine environment and its more favorable feature like high speeds is considered as a negative factor for the offshore wind turbines.

The lack of easy accessibility due to the installation of the offshore wind turbines far away from the shore makes it difficult to operate mainly in bad weather conditions. The rectification of issues can expensive in terms of transportation, logistics, and maintenance. All these factors are the major challenges that are likely to hinder the offshore wind market growth.


The impact of offshore wind energy farms on the landscape is the major challenge faced by the global offshore wind market. Most of these farms are constructed in the shallow waters which are nearer to the coast, which ultimately brings a lot of issues in terms of usefulness. Moreover, the advancement in technologies is expected to help the constructors in building these wind farms farther from the coast.

The construction phase of these wind farms is likely to affect marine life and extremely damages the sea mammals, which can be considered as a negative impact. The usage of bubble screens can help in resolving this issue and furthermost, it also helps in reducing the noise pollution generated through these wind energy farms.

On the basis of the water depth, the global offshore wind market is pronged into up to 30m and 30m above. Among which the 30m segment is expected to hold the majority of the shares due to the installation of the wind towers which is easier in shallow water and altogether decreases the overall cost of the capital.

Moreover, the forecast period is expected to witness a magnificent growth in the 30m above segment and it is predicted to rise from 30% to 50%. This is due to the increase in the investments in the floating offshore wind power projects which are installed in deep water.

Based on location, the global offshore wind market is segmented into shallow water, transitional water, and deep water. The shallow water segmented has accounted for the largest share in the global offshore wind market. Moreover, the transitional water segment is predicted to register a high CAGR of 10.86% from 2019 to 2026. The wind turbines in the deep water are expensive due to the high-cost maintenance and on the other hand, the development of shallow water is cost-efficient due to good weather conditions.

The market is segmented on the basis of location, region, and component. The global offshore wind market is expected to witness decent growth during the forecast period.

Based on the application, the market is segmented into tower, turbines, electrical infrastructure, nacelle, and blades

Based on the propulsion types, the market is segmented into three types shallow water, transitional water, and deep water

During the review period, the market is anticipated to surge at a decent rate of 19.85%.

What is expected to be the market size by 2026?

Offshore Wind Market size is projected to be worth USD 121.54 Billion by 2027

What are the segments, based on location?

The segments depending on location are transitional water, deep water and shallow water.

Which component-based segment can take the lead in the global market?

Turbine is the component-based segment can take the lead in the global market.

What factors are boosting the market growth for offshore around the world?

Increasing investments to develop clean energy, economic surge with high focus on emission reduction and increasing competition between top players are boosting the market growth for offshore around the world.

What factor can have a negative impact on the market?

High cost of construction activities can have a negative impact on the market.

What is the difference between onshore and offshore winds?

Why is offshore wind better than onshore?

Offshore wind farms have a higher potential for power generation due to faster and more constant winds, also providing energy at a more stable rate. There are no visual or noise pollution disadvantages as those caused by onshore wind farms.