The COVID-19 pandemic had a devastating impact on industries such as automobile, aviation, and retail. However, the pandemic did not severely impact the IT sector. The IT industry saw a stable revenue despite the pandemic. The major impact the IT industry faced was increased IT expenditure as employees opted for work from a home model and the adoption of cloud software and other digital platforms increased during a pandemic. Furthermore, the pandemic has opened new market opportunities for the IT industry, including growing demand for 5G technology, quantum technology, virtual and augmented reality, blockchain and artificial intelligence, and machine learning.


The web 3.0 blockchain has a decentralized nature. Therefore, all the transactions are recorded and are highly transparent. Blockchain uses the technique of information traceability which assures the user that data is not tampered with or modified. Web 3.0 blockchain technology increases the transparency of the payment system, and every transaction done is recorded and is irreversible, which is beneficial for users during the inspection.


Web 3.0 blockchain is a rapidly developing technology. It provides major benefits to the end-user, such as reduced cost of operation, higher speed, lower chances of cyber-attack, and individual control of data. The technology has seen major developments in recent years, such as Blockchain and IoT integration and usage of blockchain technology in logistics and operation. Major R&D is carried out to improve the scalability of this technology which can be optimally utilized in industries such as currency exchange, social media service, messaging platforms, data storage, and browsing. In recent years web 3.0 technology has helped the rise of NFT payment systems and digital collectibles. The technology is also being used for other applications such as spatial web designing, 3D graphics, and more. The continuous growth of web 3.0 will create immense growth opportunities in the forecasted timeframe and will impact many industry verticals.

The global web 3.0 market has been segmented on the basis of blockchain type, application, vertical, and region.

Based on blockchain type, the web 3.0 market is segmented into public, private, consortium, and hybrid.

Based on application, the web 3.0 market is segmented into cryptocurrency, conversational AI, data & transaction storage, payments, smart contracts, and others.

By vertical, the web 3.0 market is segmented into BFSI, e-commerce & retail, media & entertainment, healthcare & pharmaceuticals, IT & telecom, and others.

Based on region, the web 3.0 blockchain market is segmented into North America, Europe, Asia-Pacific, the Middle East & Africa, and South America. In 2023, the North American region will account for the largest market share of nearly 56.2%, owing to the factors such as increasing adoption of blockchain technology, innovation in a decentralized ecosystem, and continuously increasing investment in cutting-edge web 3.0 startups. The region is expected to register a robust CAGR of 41.2% during the forecast period. The US will be the largest contributor to the North America web 3.0 blockchain market, accounting for a 97.6% share in the 2023 fiscal year. Meanwhile, in 2023, Europe will hold the second-largest market share, owing to the growing demand for web 3.0 blockchain technology from several end use industries such as BFSI, media & entertainment, IT & telecom, e-commerce & retail, and others. Furthermore, Asia-Pacific will stand at the third position globally, attributed to the increasing investment in the adoption of blockchain technology from the major companies operating in this region. China will hold the largest market share in the Asia-Pacific web 3.0 blockchain market, accounting for a 57.1% share in the 2023 fiscal year. 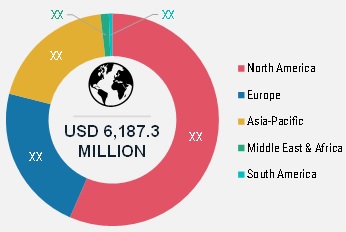 The global web 3.0 blockchain market size will witness robust growth during the forecast period due to growing government initiatives for 5G infrastructure development, the rising use of advanced technologies such as blockchain, and the increasing demand for decentralized applications and services across the globe.

The web 3.0 blockchain market is highly fragmented, owing to a large number of local players, especially in developed countries such as the US, the UK, and Germany. Investment from the top venture capital firms globally in the infrastructure and talent driving the blockchain and digital asset ecosystem is increasing continuously. It is expected that the established players in the technology sector will invest heavily in the web 3.0 blockchain market in the near future. Moreover, increased venture capital funding and corporate and public investments in distributed ledger technologies (DLTs) are expected to boost blockchain's adoption in logistics, distribution, manufacturing, and healthcare. For instance, in March 2022, the European arm of global cryptocurrency exchange FTX announced a partnership with Tomorrowland to bring blockchain and Web 3.0 solutions to the iconic electronic music festival. Web 3.0 applications such as non-fungible tokens (NFTs) for art, music, and tickets, as well as crypto payments and metaverse events, will be investigated by the partners. Tomorrowland is one of the world's largest music festivals, with over 400,000 people attending its annual summer festival.

This study estimates revenue growth at global, regional, and country levels and offers an overview of the latest developments in each of the sub-sectors from 2023 to 2030. For this analysis, MRFR segmented the global web 3.0 blockchain market based on blockchain type, application, vertical, and region.

What is the expected CAGR for the web 3.0 market?

What is the major driving factor for the Web 3.0 market?

The decentralized nature is the primary driving parameter for the markets growth.

What are the types of blockchain technology?

The significant types of blockchain include hybrid, public, consortium, and private.