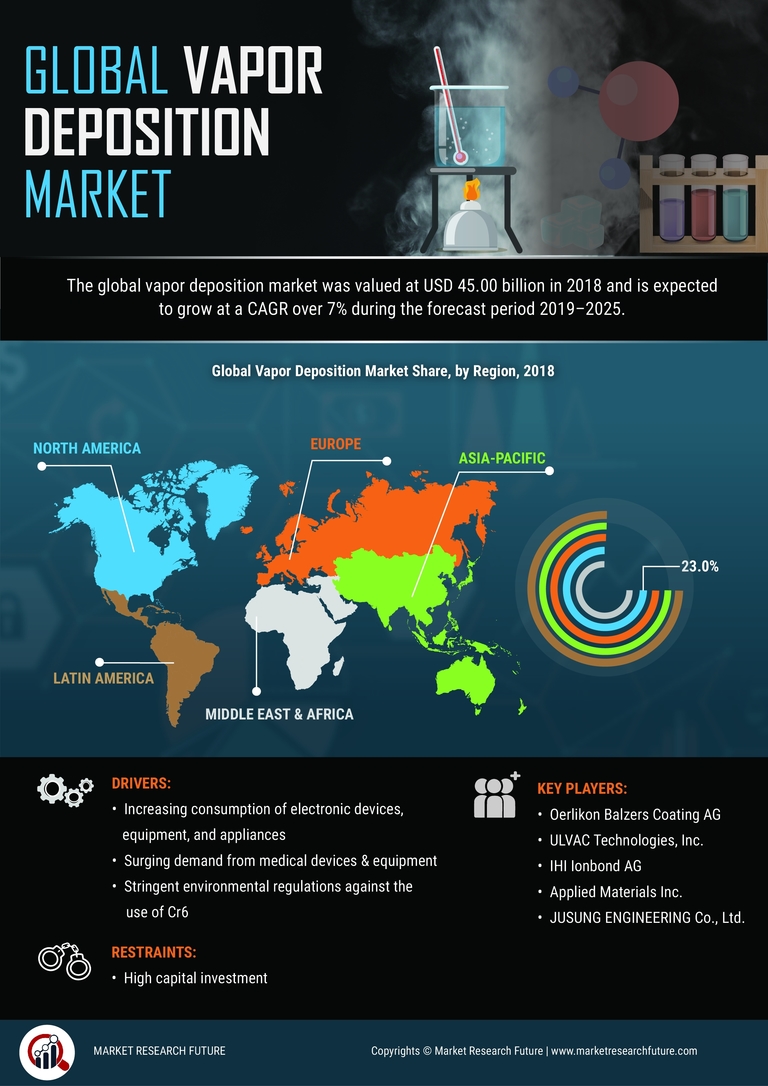 Market Research Future (MRFR) anticipates the Vapor Deposition Market to hit a valuation of USD 63,686.70 Million by 2023-end. It is also presumed that the vapor deposition market share will increase at a rate of 7.03% between 2022-2030 (evaluation period).

In response to the COVID-19 outbreak and the resultant lockdown, vendor had to temporarily suspend production, in line with lower product demand, disruptions in supply chain, and the need to maintain the safety of employees amidst the escalating SARS-CoV-2 cases. In the US, Germany, France, Spain and Italy, the demand for vapor deposition has declined post-pandemic. As a result, reputed vendors are trying to revive their operations by bolstering their supply chains and explore ways to deal with the challenges brought by the novel coronavirus.

Players Enter Joint Ventures to Gain a Higher Customer Base

Several firms are responsible for vapor deposition market growth, given their involvement in extensive R&D (research and development) activities coupled with acquisitions and mergers with other manufacturers as well as distributors to bolster their geographical presence. Most of the companies hold a substantial vapor deposition market share and are striving to expand their customer base by entering joint ventures with other vendors.

Plasma-Therm is a well-known leader in the vapor deposition industry, and a key innovator of advanced plasma-processing technologies. Plasma-Therm's strong presence in the market is backed by over 40 years of focus on product innovation, customer support, low cost of ownership and reliability. Plasma-Therm products are widely used in large-scale manufacturing as well as research institutions, securing the company’s reputation in the global market.

Rapidly Surging Demand for Electronic Devices to Benefit the Market

The medical sector has emerged as a promising end-user in the global vapor deposition market, as it is fast adopting new and advanced technologies for combating the ever-rising number of diseases as well as complex disorders. Another potential end-use industry is automotive, where demand for lightweight materials is significantly high owing to the need to cut down CO2 emissions and fuel consumption. As a result, the demand for aluminum, carbon-reinforced plastic materials and magnesium has grown in the industry. However, these materials tend to stick to the cutting tool, which leads to reduced lifespan. To deal with these issues, the automotive industry has been adopting coating materials that have low coefficient of friction such as vapor deposition, which has translated into an impressive market growth.

Stringent regulations pertaining to the F-gas emissions due to the use of a few precursors can be a significant challenge for leading manufacturers in the global market.

Applications in Microelectronics to Escalate Rapidly

The significant end-use industries in the market are medical, automotive, aerospace, metal, electrical & electronics, and others.  The demand for vapor deposition in the medical industry is quite robust, on account of the soaring demand for bio-compatible and wear-resistant thin-film coatings. Vapor deposition coating is utilized in several medical devices, such as stents, orthopedic plants, medical pressure sensors, pacemakers, dental instruments, surgical instruments and orthodontic appliances.

The highest growth has been demonstrated by the Asia Pacific market, with its position further cemented by the rapid expansion of several end-use industries such as electronics, aerospace, automotive, defense, electrical and construction. China is one of the largest markets for vapor deposition, not only in the region but across the globe. In APAC, the demand for superior quality medical coating materials has escalated rapidly due to the frequent innovations in technology along with the surge in healthcare spending. This factor is bound to work in favor of the vapor deposition market in the region. Apart from this, the amplified demand for DRAM and flash memory in the communication and consumer goods applications in South Korea, India and China can also foster the vapor deposition market demand in the following years. Therefore, MRFR expects the Asia Pacific market to advance at the fastest rate of 7.39% during the review period.

North America to Emerge as a Strong Contender

North America is the second biggest market and could touch USD 14,552.40 million by 2023-end. Extensive regulatory framework supporting domestic private spending in Mexico has been favorable for the semiconductor industry, which has led to higher demand for vapor deposition. In North America, considerable spending on R&D activities by affluent medical device developers in the United States is also anticipated to bolster the vapor deposition market size in the region.

Europe remains another prominent market, having captured a share of 18.93% in 2017. Germany can possibly take the lead in the European market in the near future, thanks to the accelerated demand for vapor deposition in the automotive industry. Demand for advanced metal-cutting technologies is strong in Germany, since it offers complex shaping, precise dimensional accuracy and surface texture to finished goods that are utilized in manufacturing of components in several industries.

What will be the possible market valuation of the vapor deposition market?

At what CAR is the global vapor deposition market predicted to grow over the forecast period?

Which region is predicted to have the largest share in the vapor deposition market?

The APAC region is likely to have the largest share in the vapor deposition market.

Who are the eminent players profiled in the vapor deposition market?

What are the various applications of vapor deposition market?

It is widely used in medical, metal industry, aerospace, automotive, and electronics and electrical.